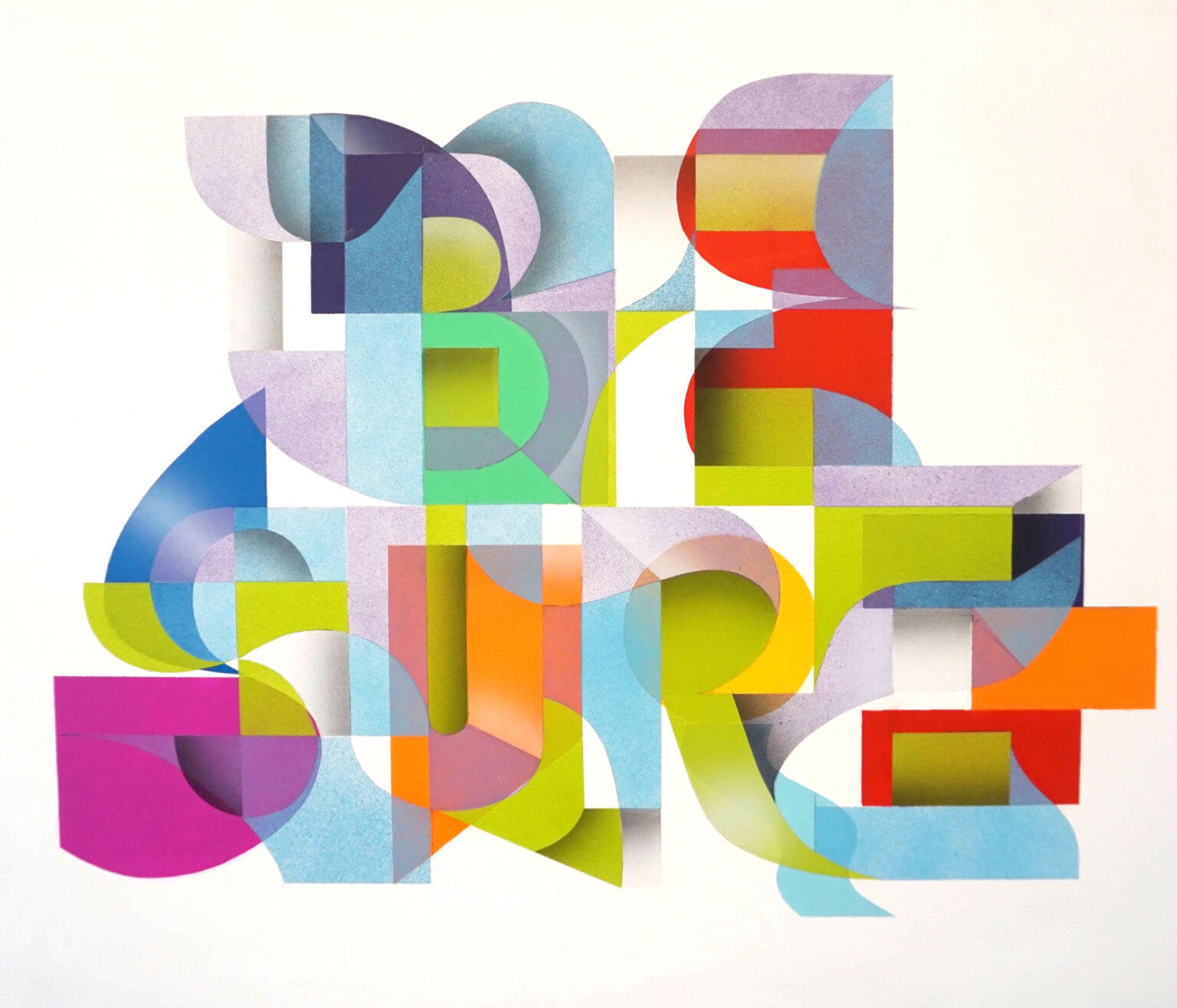 Artist Ryan Adams couldn’t believe it. He’d just gotten word from the Portland Museum of Art (PMA) that he had been chosen as one of 25 artists to participate in their latest exhibition, Untitled, 2020, Art from Maine in a ___ Time. Not only that. They also wanted to display a banner of his selected art on the museum’s facade.

“Are you sure?” he almost asked. He thought back to his humble start as a young graffiti artist and how in his wildest dreams he’d never imagined his art would end up in the hallowed halls—or even on the exterior—of the most prestigious arts institution in his hometown.

“I was so, so psyched,” he recalls. Not that he’d been striving for this kind of recognition. Painting large-scale murals and designing signage in his beloved community is enormously fulfilling work, he says. But to receive such thrilling news at the end of a dark year—on his birthday (December 4), no less—was indeed cause for celebration.

The PMA had chosen Ryan’s boldly colorful digital print, featuring the timely, oh-so-reassuring message: “We Gonna Be Alright.” The lettering was executed using his signature “gem” style of lettering: a geometric breakdown of letterforms with shadows and highlights embedded within to create depth and movement, as he explains.

Since then, he’s hardly put down his paintbrush—and he’s carried that same hopeful messaging into his most extensive project ever: a massive 9,000-square-foot mural on all four walls of Bethel’s Gem Theater. It’s one of Maine’s largest pieces of public art and one that resonates deeply with him, as it’s been a community effort that has involved dozens of local volunteers, including middle schoolers with whom he brainstormed the project’s theme, which he says is “about caring for the people around you and working together to get through tough experiences.”

His work can also be seen this fall and winter (October 20 to January 9, 2022) at Rockland’s Center for Maine Contemporary Art in Lessons, an exhibit featuring a 33-foot-long mural along with a selection of his paintings on canvas, which he says “reflect on things I’ve learned about race and ethnicity while growing up in Maine.”

Ryan’s Be Excellent to Each Other, in latex and spray paint, wows customers at Castle Island Brewing in Boston.
What’s yours is mine and what’s mine is mine (36” x 36”, acrylic, 2019) hints at Rachel’s playfulness.
Tachee, Rachel’s line of hand-printed textiles, includes silk-screened sweatshirts.
Rachel designed “Grandma’s Mac and Cheese” and “Hazel Rock” for a pillow commission at The Francis Hotel.
Ryan’s digital-print banner, We Gonna Be Alright, hung for months on the facade of the Portland Museum of Art.
For their Piece Together Project, Ryan and Rachel collaborated on Moon, a mural depicting teacher and East Baysider Moon Nguany Machar at Rising Tide Brewing.
Detail of Ryan’s epic Self Portrait (20 by 24 feet) in New Castle.
Rachel’s Bloomin brightens up Oxbow Blending & Bottling in Portland.
Love for community animates art by Rachel and Ryan Adams
Ryan’s Whoa (20” x 24”, spray paint and acrylic, 2019, detail shown) hides letters amid lines and shadows.
Previous
Next

With all his projects, Ryan shares ideas and inspiration with his most trusted adviser: his wife, Rachel, also mom to their two adorable girls, 4-year-old Zoë and 1-year-old Norah.

But Rachel, a graduate of Maine College of Art, is not just his muse. A talented artist and designer in her own right, she is also hitting her creative stride—so much so that she recently left her full-time office job to throw herself into her art. “Our days didn’t get any less crazy after I left my job,” she says. “But it’s liberating to be working on things I’m super excited about.”

Earlier this year, Rachel launched Tachee, a line of hand-printed home goods and children’s clothing—to which she recently added adult clothes, and she also completed two exuberant murals inside the new Children’s Museum & Theatre of Maine, which her friend Marcia Minter, cofounder of Portland’s Indigo Arts Alliance, says are “just perfect—fun, modern, and aligned with the space.”

Or as her number one fan puts it: “She crushed it!”

She appears to keep on crushing it—with her bright, cheerful new mural inside Oxbow Blending & Bottling on Portland’s Washington Avenue (“everything was reopening again, so I wanted to bring people joy”), with the engaging art workshops for kids she recently hosted during the PMA’s David Driskell exhibit, and at Root Wild Kombucha, where she collaborated with Ryan and other artists on a stunning mural that incorporates elements of freedom quilts given to slaves in the 1800s.

The work with Ryan was far from their first collaboration. “Everything we do is a collaboration, whether literally or spiritually,” says Rachel.

In addition to their so-called separate projects, Rachel and Ryan recently teamed up on designing beer-can labels for both Fog Town and Athletic Brewing Companies, launched the ongoing Piece Together Project, which honors the people of Portland’s East Bayside neighborhood with vibrant, eye-catching murals that invite passersby to learn about the residents and their uplifting stories, and they are currently part of a deeply personal show at New Systems Exhibitions in Portland (September 24 to October 10) that looks back on the year 2020. “It was a year of cultural awakening,” says Rachel, “and it’s also when we were catapulted into the Maine spotlight. The work breaks down the facade of pretty Instagram shots. We were stuck inside the house, too.”

While it might have been Ryan’s hand at work on the striking mural of George Floyd, the touching tribute to health care workers, and his many other highly visible works of art on Portland’s streets, his partner in work and in life is always by his side—and vice versa.

It certainly helps that they share similar sensibilities, a desire to celebrate inspiring individuals and businesses within their community and to create art that is easily accessible and expresses their values and beliefs.

But they do have some differences. Rachel laughs about how neither of them “has the capacity to hold back” if they think the other’s work needs tweaking. “Ryan’s style is a bit more rigid, and mine is looser,” she says, “so we might have more of a conversation about it than an outright ‘You’re wrong!’ which doesn’t feel right when talking about someone’s work.”

Ultimately, says Rachel, “we balance each other out.”

Their friend and fellow artist Karen Gelardi admires their ability to bring out the best in each other. “As a duo,” she says, “you see so much give-and-take from both of them.” 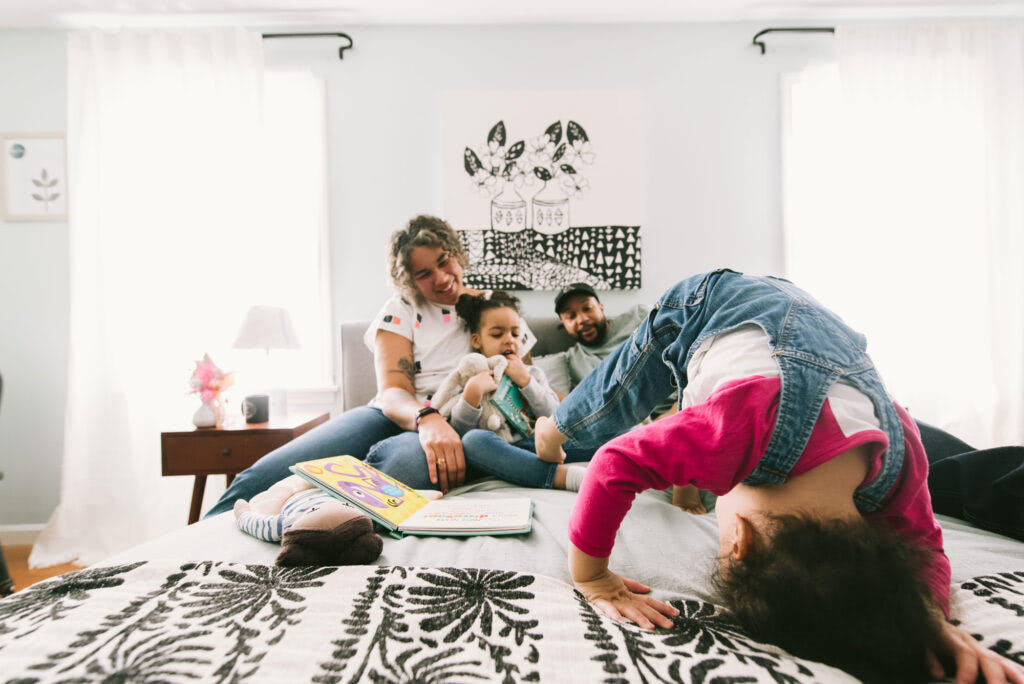 No doubt, their supportive partnership helped them thrive during the worst months of the pandemic, though they felt less productive during the stressful early days just after lockdown when they were without childcare.

Some might say that Rachel and Ryan’s own contribution to Portland is itself large-scale-mural-worthy.

“Artists of all generations are learning from them,” says Karen. “What they have taught me—and I’m sure I’m not alone—is to speak from the heart.”

Marcia Minter would concur. “Their role in the community cannot be overstated. They represent two young parents who are entrepreneurial talents claiming their right to hold space—in a big way, figuratively and literally. Rachel and Ryan are 100 percent the real deal. No pretense, committed to excellence, they say what they mean and do what they say. They are models for everyone.” 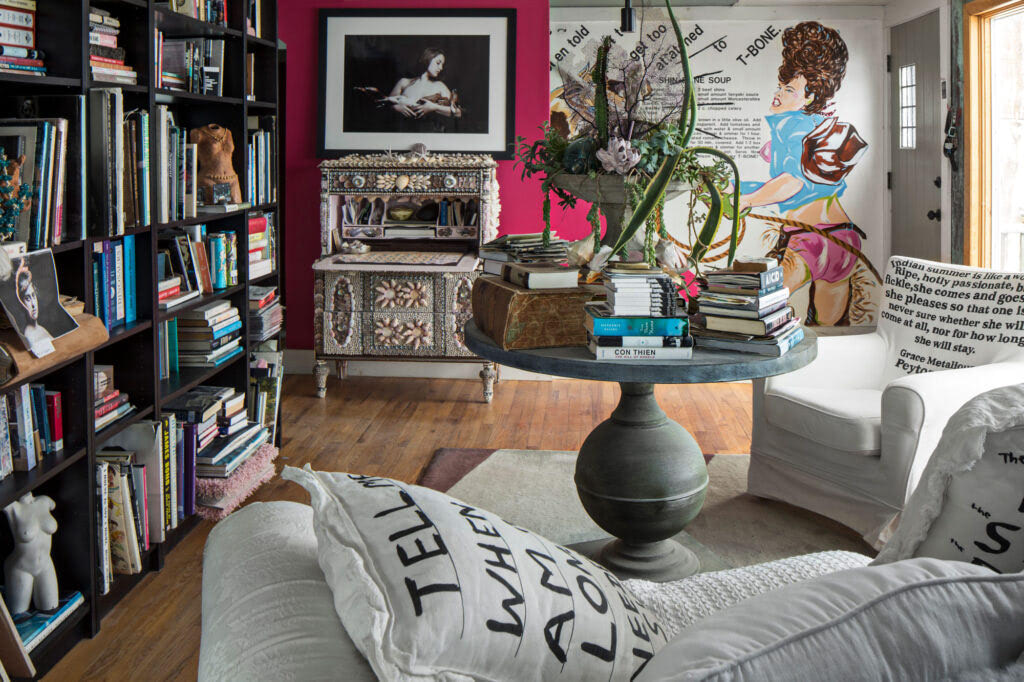 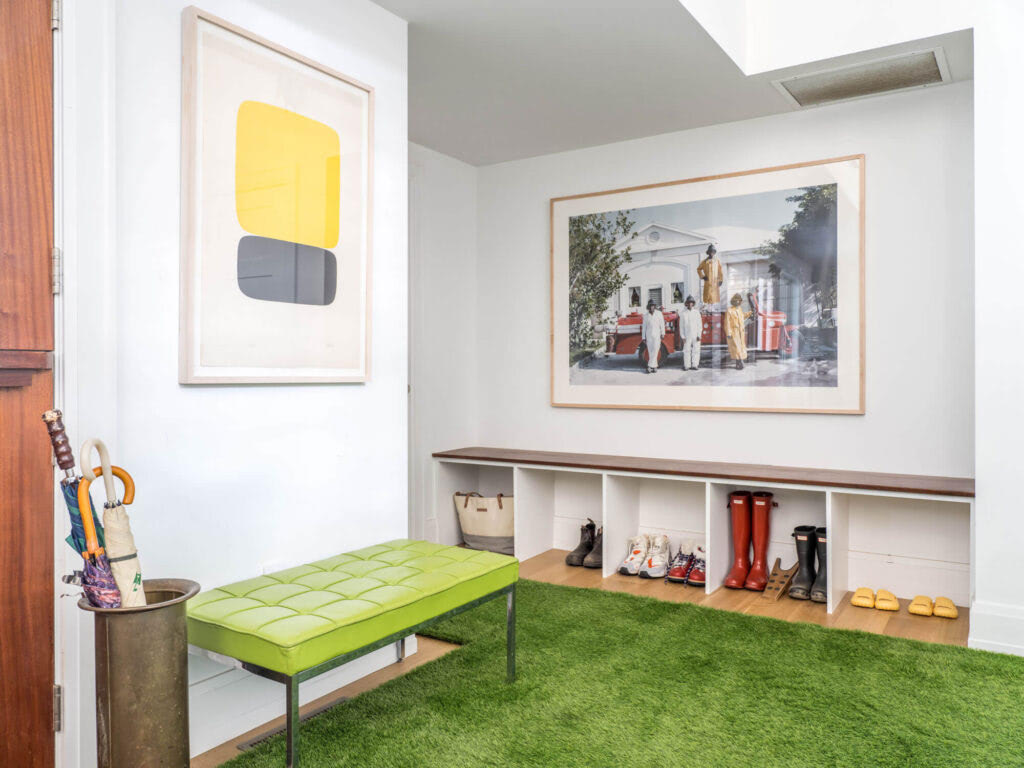 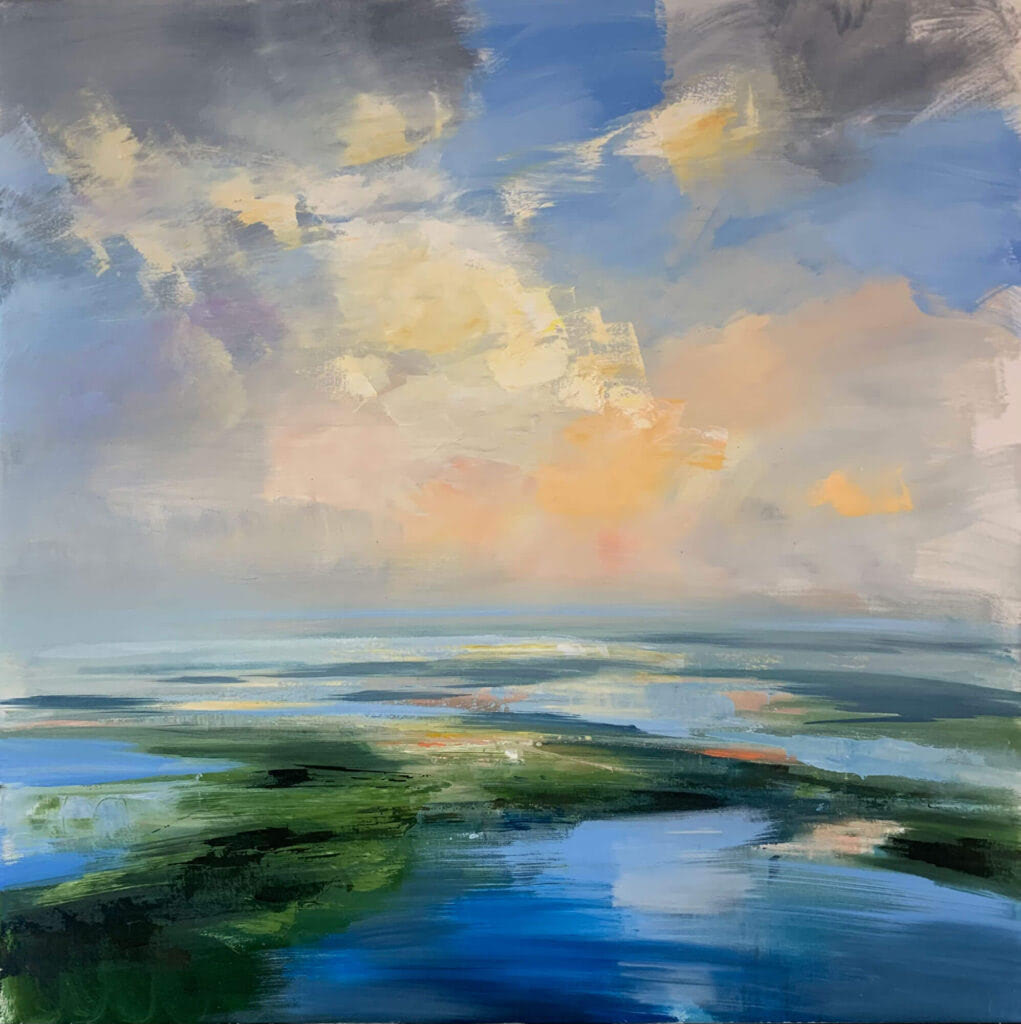 Take a trip up the coast to see why Maine is an art aficionado’s dream destination, and why we are calling the sate the original of all things “digital”