A peek inside the York home of Artist Lauren Gillette, where every surface reflects a fascination with narrative
Words By Jenny O’Connell
Photos By Maura McEvoy 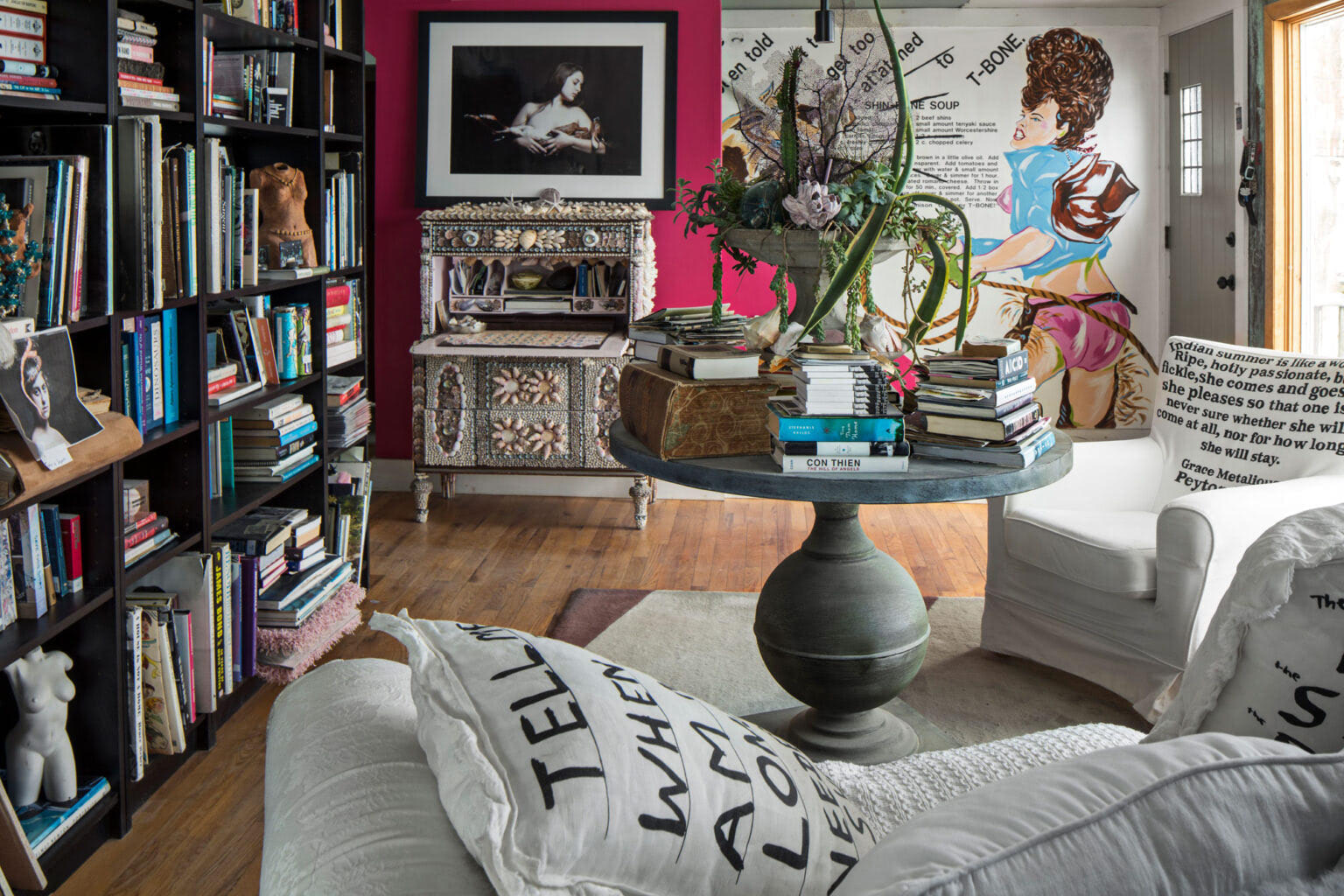 In Lauren Gillette’s York beach house, no surface is safe from story. Black-lettered quotes are stamped onto armchairs and throw pillows. Beach rocks inscribed with important family moments cluster in a bowl. Collected phrases scrawl across a wall-sized chalkboard: “TAKE THE CANNOLI.” “If I don’t love you, baby, grits ain’t grocery, eggs ain’t poultry, and Mona Lisa was a man.” “Democracy is not instant coffee.”

“I feel like sometimes I just have a gravitational pull. I start collecting, and something rises to the top,” says Lauren, about her process of making art. Indeed, the entire second floor of the house—Lauren’s studio—feels like an extension of the artist’s mind. Plastered on the green bathroom wall is a satirical rejection letter from a major publishing house, which outlines in hilarious detail why EAT IT OR WEAR IT, Lauren’s illustrated memoir (which can be found on her website) is not fit for print. In the bedroom, modeled after the American Museum of Natural History’s Hall of Biodiversity, test tubes hang in a row, filled with sand and pine cones that Lauren and her daughter gathered in their travels—“a generational portrait without paint.” 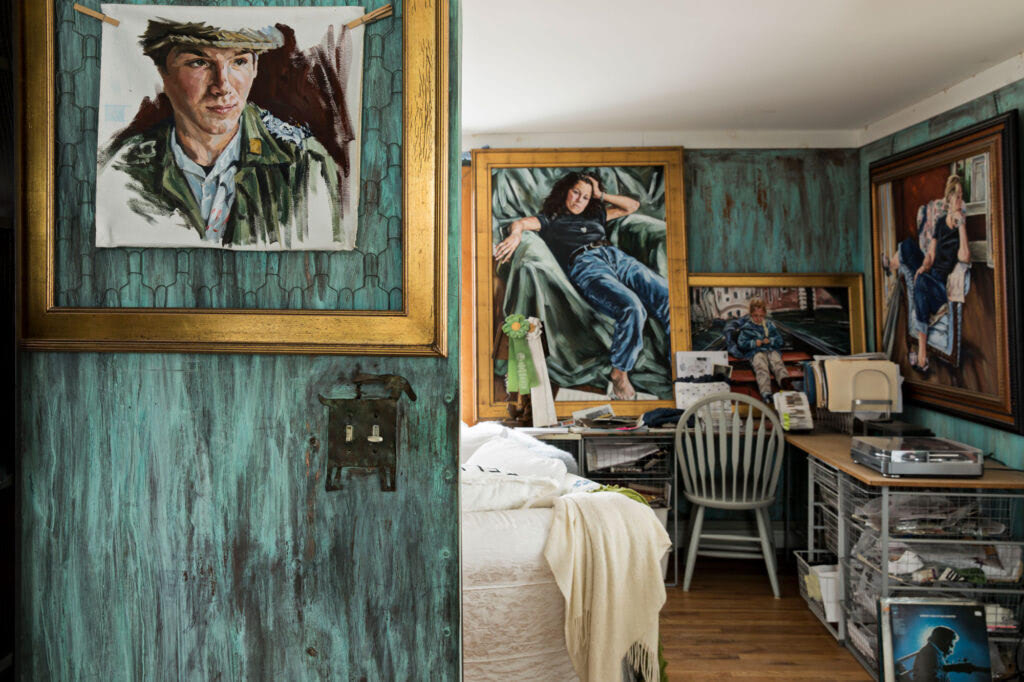 “I’m surrounded by stuff,” Lauren says. But this “stuff,” pulled from song lyrics and overheard conversations, yard sales and thrift stores, jumbles together until it makes something deeper than sense—until it makes you feel something. “At the end of the day, I’m just a storyteller,” Lauren says. “I’m gobsmack in love with narrative.”

Lauren, who began her artistic career in portraiture and photography, moved to Southern Maine from Massachusetts in the late 1990s, when her daughter was starting kindergarten. “I didn’t want to come here. I didn’t want to have any part of Maine,” she says. “And it turned out to be the best thing that ever happened to me.”

The house she inherited from her father was built near York Beach in the early ’60s, a simple structure on cinderblocks modeled off the kinds of plans you could find at the hardware store. Blown off its pins in the blizzard of ’78, it was restored, and the family eventually added a second story. And while its colorful interior bears the marks of Lauren’s imagination, her home near the ocean has also had a deep reciprocal effect on her art. “I had more time. I had more space. I had more light, big time. And I had so much natural beauty around me, I got tired of trying to duplicate it,” she says.

Lauren mines thrift stores, yard sales, song lyrics, and conversations for inspiration for her next project.
"I start collecting, and something rises to the top," Lauren says.
The house Lauren inherited from her father near York Beach serves as a collecting place for the tangible stories she picks up in her travels.
Previous
Next

Though Lauren’s portraits have always told a story, when she moved to Maine, she dove headlong into the world of words. Wish/regret is a black-and-white mugshot-style photo collection of people holding signs lettered with their desires and disappointments. In things i did, Lauren solicited five-line memoirs from strangers off Craigslist, which she etched into a gallery of mirrors. Her most recent project is a series of jackets that bear intimate stories collected over the years from celebrities, personal interviews, and most recently, motherhood.

Lauren credits her mother for instilling in her a fascination with stories. “My mom was a folk singer, and I was singing murder ballads with her when I was a little tiny muffin,” she says. “You learn storytelling early.” Complex stories attract her the most, and Lauren’s art explores everything from racism to illness, from trauma to the human condition—all starting with the poignant, irreverent glimmers of thought she collects on her walls and furniture. “You find these threads, and they’re just little ways in,” she says. “You can see a piece of yourself in everything.” 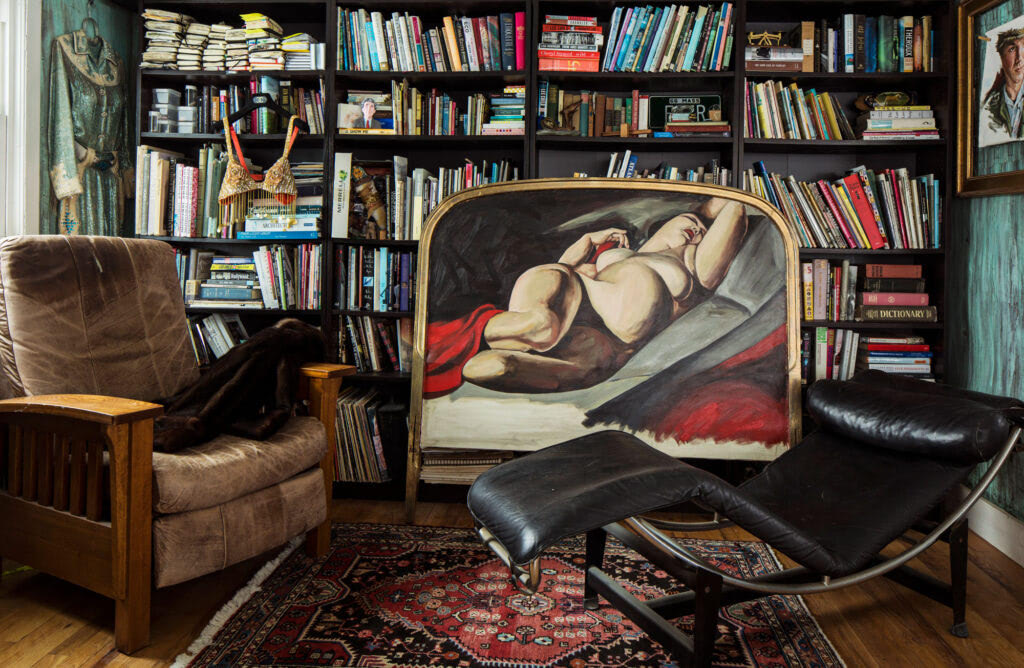 With each work of art, Lauren strives to tap into multiple levels of thought or feeling. “I call it the Leonard Cohen level,” Lauren says. “Just think of a Leonard Cohen song. There’s 76 layers to it, and they all intertwine. On a good day you hope to work on more than one level. You could do something that hits someone in a way they weren’t expecting, or talk about history in a way that makes it more palatable to people.” Lauren sees storytelling as an ancient and essential way to connect people to themselves, to each other, and to the world.

Lauren believes that storytelling is an essential way to connect people to each other.
A photograph from wish/regret hangs on the wall next to one of Lauren's jackets.
Each jacket tells the story of an individual.
"A generational portrait without paint": test tubes of sand collected by Lauren and her daughter hang on the bedroom wall.
Previous
Next

“We’re all looking for something, and it’s not the obvious thing,” she says. “We recognize it when it surprises us.”