A Bunkers Harbor Work in Progress

For a couple who’ve made Maine their adopted home, creating a simple, meaningful escape on Schoodic Peninsula was a process that unfolded over four decades—and continues still
Words By Annie P. Quigley
Photos By Erin Little 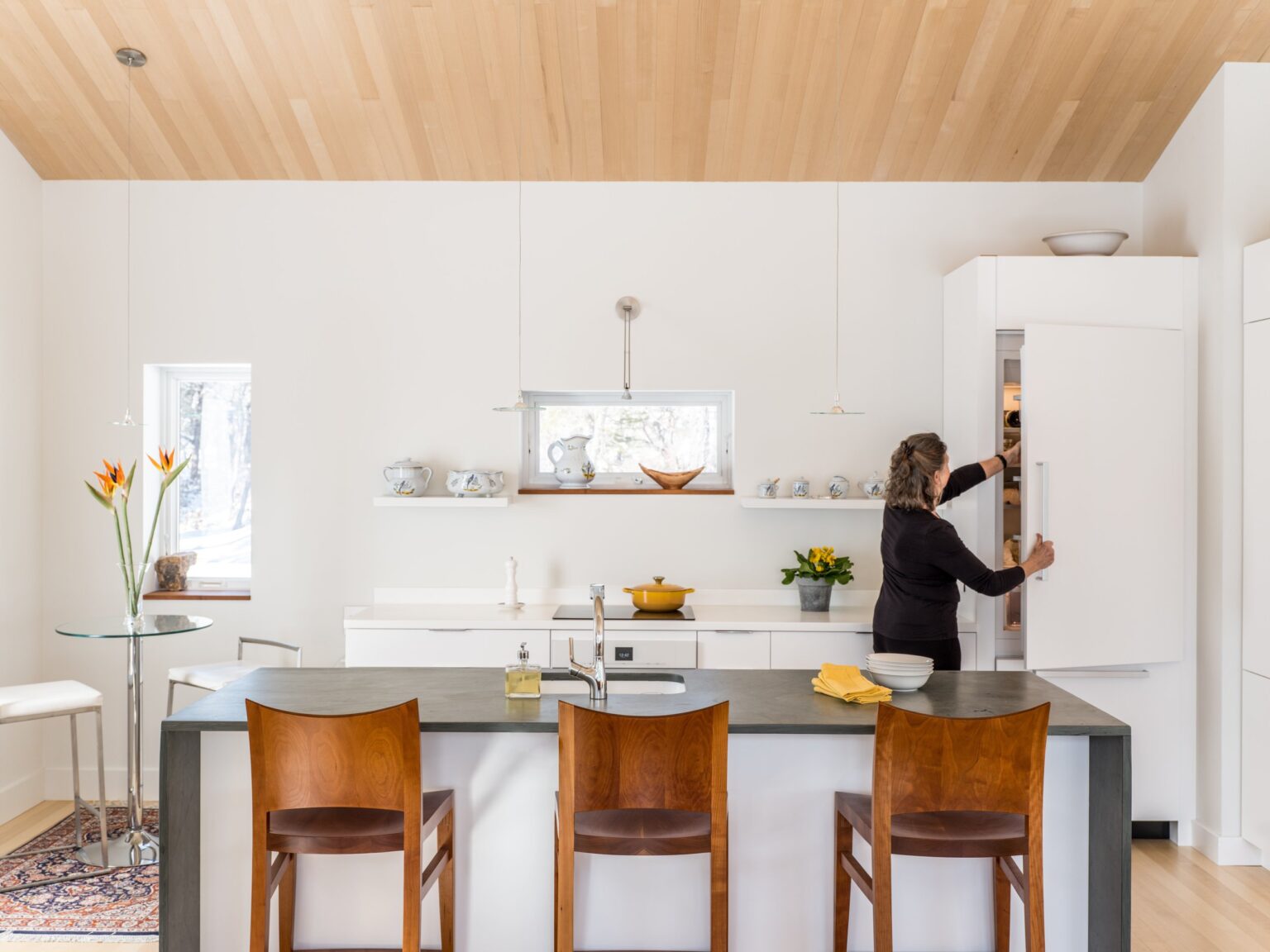 The origin story of this house goes back — way back, to August of 1983. That summer, a gallon of gas cost 96 cents, Risky Business was just about to premiere in theaters, and Chantal Jennings and her husband, Michael Jennings, first spotted a parcel of land on Bunkers Harbor on the Schoodic Peninsula.

“I seem to remember that it was listed for sale in Down East magazine,” recalls Chantal, who was born in France. The land—which held a main house, guest cottage, and stable—had previously been the summer artist retreat of California-based watercolor painter Barse Miller. “It isn’t clear how involved Barse was in the construction, but there is some consensus that he designed the buildings,” Chantal says. By the time she and Michael bought it from Ethel Elizabeth “Betty” Miller, Barse’s widow, however, the property was abandoned, the structures in shambles.

“They leaked; there was food left in the refrigerator, trash everywhere, and abandoned personal items; creatures had gotten inside … it was pretty sad looking,” recalls Chantal. “We were busy with our little family, so we didn’t do much to improve the buildings or use them.” But the landscape was as beautiful and rugged as when it had drawn Barse there to paint. “The slow-growing, stunted jack pines that grow in our ocean microclimate look like bonsai trees,” says Chantal. “We visited once or twice a year to enjoy the shore and the constantly changing ocean views.”

Then, in August 2014, 31 years later, almost to the day, Chantal and Michael were ready to simplify and downsize, to sell the Alexandria, Virginia, house they’d lived in since getting married and make Maine home, splitting time between their house in Winthrop and the still-untouched property on the harbor. They had the derelict buildings razed and began, slowly, to create something new. “We originally thought a tiny, easy, rustic building,” says Chantal, “but as we discussed and tossed ideas around, it became apparent that as we advanced in age, something more comfortable would be better.”

Fortunately, there was an architect in the family: the couple’s daughter, Elizabeth Jennings of Charlottesville, Virginia–based Small House Design. “Elizabeth was the logical person to turn to,” says Chantal. “She knew what we wanted to achieve, knows us well, and certainly knew the property and its magic.” Lending a hand on the close-knit team was David Rogers of Rogers Design in Turner, who had overseen renovations at the family’s Winthrop house.

Chantal and Michael worked, too, hauling materials, helping to build the foundation, and refinishing floors by hand. Then again, this isn’t a couple who shy from rolling up their sleeves and learning to create the things that they love. When they were searching for a kitchen table in 1981, for example, they met Thomas and Mary Moser and have been friends ever since. Both Michael and Chantal even, separately, joined Thos. Moser’s Customer-in-Residence program to hand-make their own pieces (an Aria chair, made by Michael, is in a corner of the cottage’s bedroom, and two Minimus tables, made by Chantal, flank the bed).

The attention to detail and precision in the house is evident in all its simplicity. “Michael Klenowski, the carpenter, did the most exquisite job of bringing the ceiling boards precisely to the wall and peak and laying out the boards for the random width floor,” Chantal says. “The boards match and are so tight. And it’s easy to keep clean, even with a black Lab.”

Chantal designed the interiors with this ease of living in mind, choosing priorities carefully: a small, smartly designed kitchen over something sprawling (“Michael does not cook, so I’m usually the only one in the kitchen,” she says. “A great deal of time is saved not having to get around large spaces, and small kitchens are also easy to clean”) and, in lieu of artwork, large Marvin windows. “The views make this little place,” says Chantal. “The windows had to be expansive but also energy efficient and sturdy because of the exposure to the ocean.”

The Jenningses also made a bold choice that, ultimately, gave them a lot more freedom: no spare bedrooms. “We wanted a small escape that we could easily close and come back to, even for a couple of days at a time. Rooms that aren’t used all the time are expensive to build and take time to maintain,” says Chantal. Instead? “We put our guests up at local B&Bs. They can spend as much time as they want at the cottage, but sleeping and showers are at the B&B. It works well, and I get to enjoy my guests much more without the extra hospitality worries.” There’s room enough in the little cottage for the two of them, plus Cabot, the afore- mentioned black Lab (who Chantal says is their “resident butler, companion, entertainer, and last child at home”). 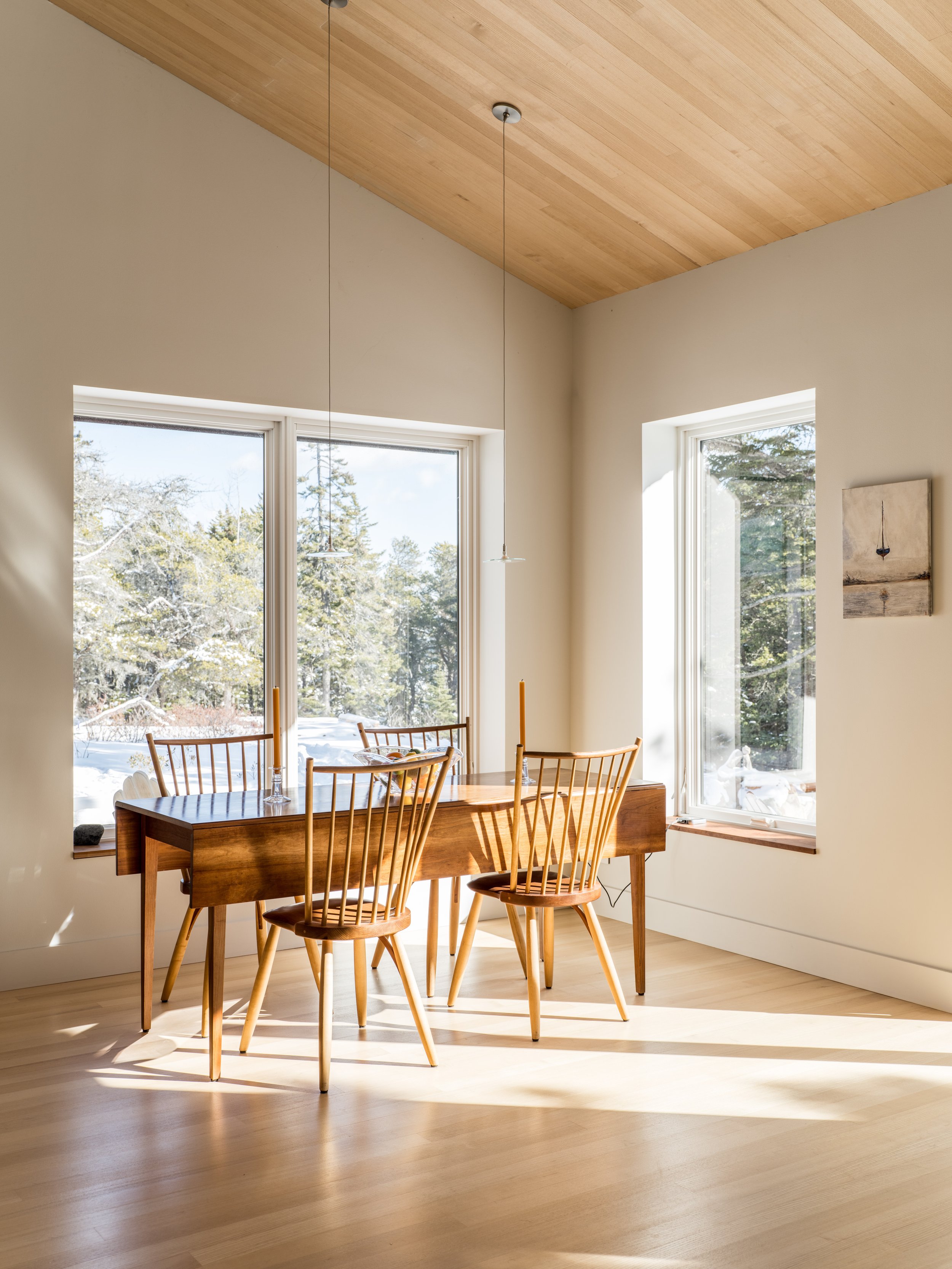 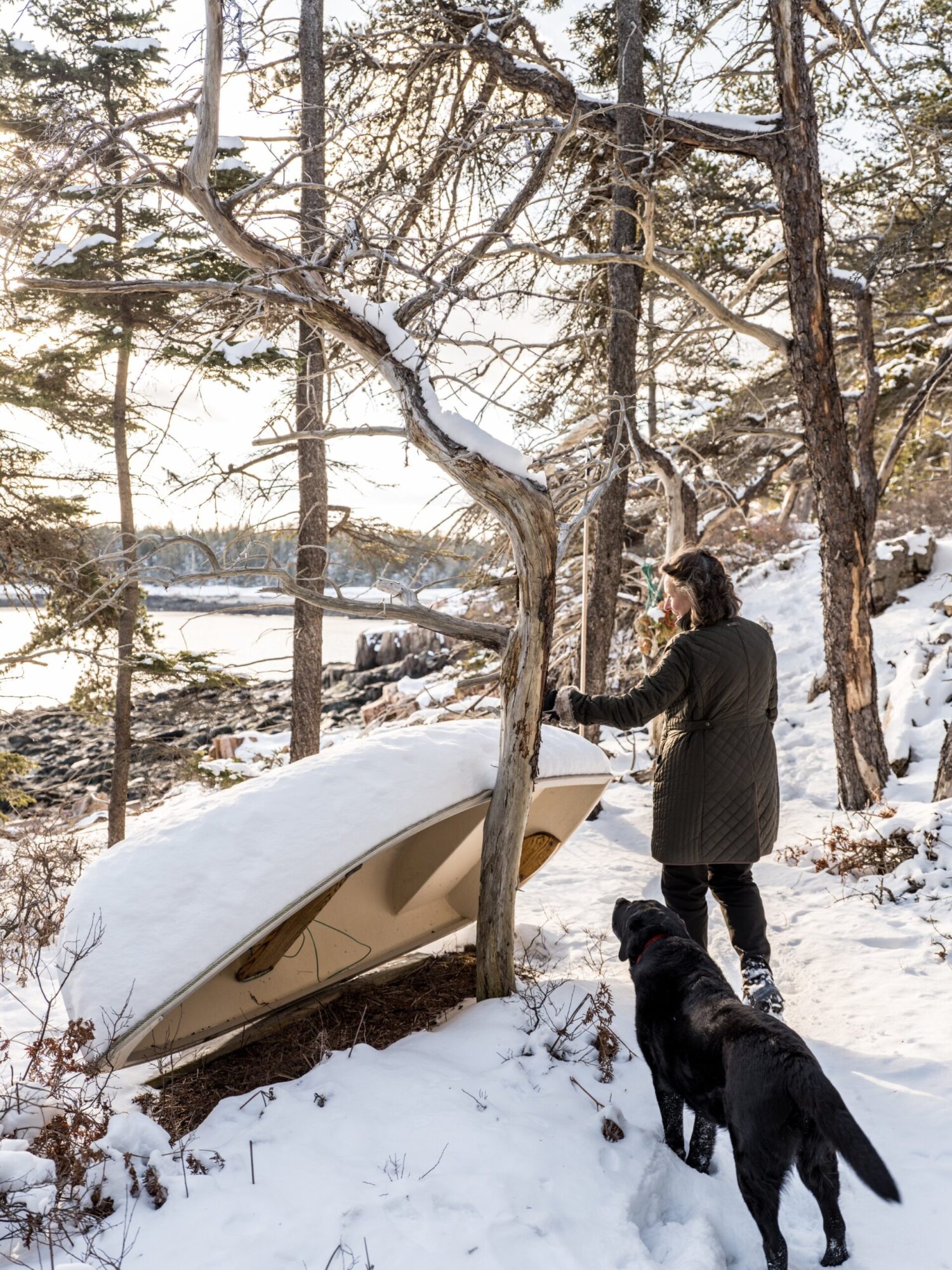 “This little cottage is an escape,” says Chantal, snug even in the depths of winter. 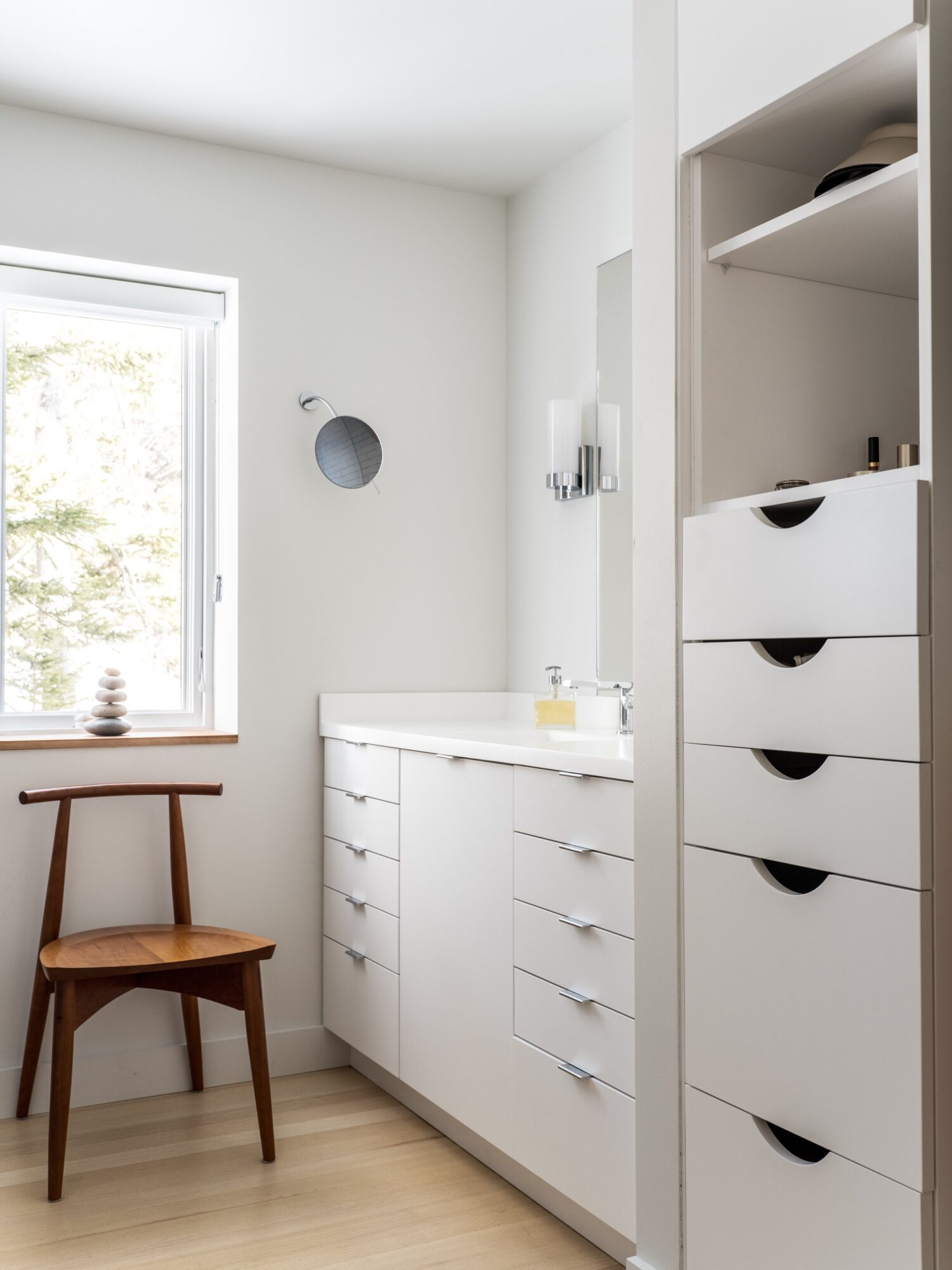 Chantal designed the sleek cutout pulls for a suite of drawers in the bath, which store linens and the laundry hamper. 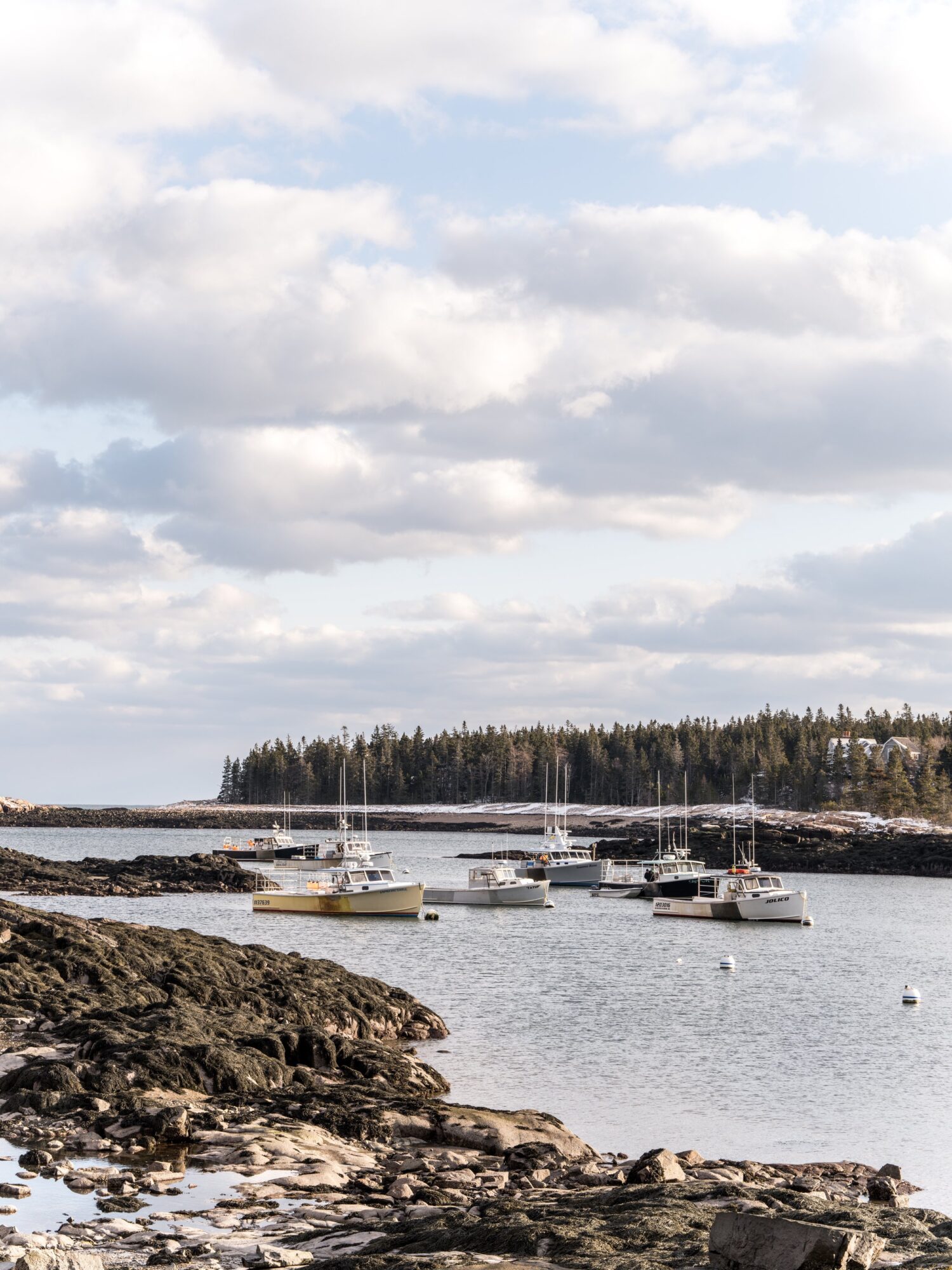 The landscape is much the same as when Barse Miller painted there.

The same slow, methodical approach of building extends to the land, too. “A large part of the beauty of this property is the native plants that existed here when we bought,” says Chantal. “It’s also low maintenance. Our desire is to keep it as natural as possible.” Chantal tends the land with a light touch, planting vegetables in raised beds, work- ing from what she calls her “practical little garden shed,” even hand-laying a patio. “The stones are all collected from this property: I selected them, and Michael carried them to the cottage. I’m not a stonemason, so the patio is natural looking and definitely not precise. It works for us.”

For them, it’s process, not perfection. “Landscaping and hardscaping are works in progress,” says Chantal. “I like it that way. It gives me little projects that are relaxing.”