A Scandi-haven in Cape Elizabeth

High on a ridge in Cape Elizabeth, Barrett Made builds a Scandinavian-style haven
Words By Allison Paige
Photos By Erin Little 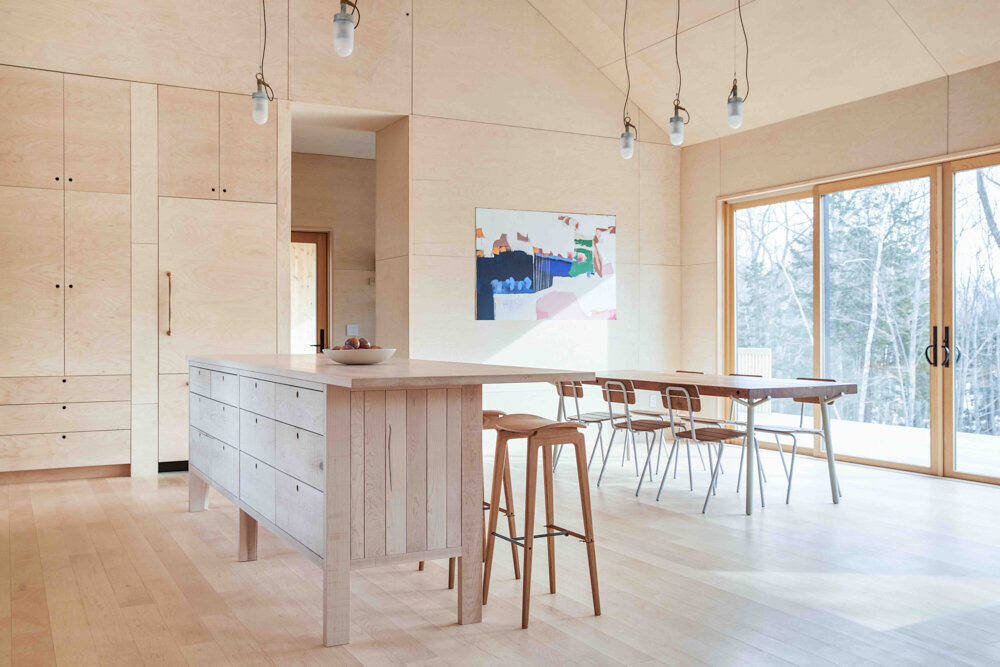 Spied on a snowy day, the home of Scott and Julie Pelletier seems transported from some Arctic  land, perhaps a Norwegian fishing village or a Finnish hamlet. The exterior has all the hallmarks of Nordic design (sleek lines and natural elements), while the interior exudes a beckoning warmth from its many windows—the very essence of hygge. And that is no mistake. The home is firmly rooted in Scandinavian minimalism and expertly rendered by Portland’s Barrett Made. The couple first met Rob Barrett, the company founder, in 2010, when Rob and his wife, Sydney, were their landlords in South Portland. The couples became good friends and kept in touch as the Pelletiers completed their medical residencies, which took them from Maine to Hawaii and back again. When they returned to the state, ready to call it home for good, they knew just whom to call. 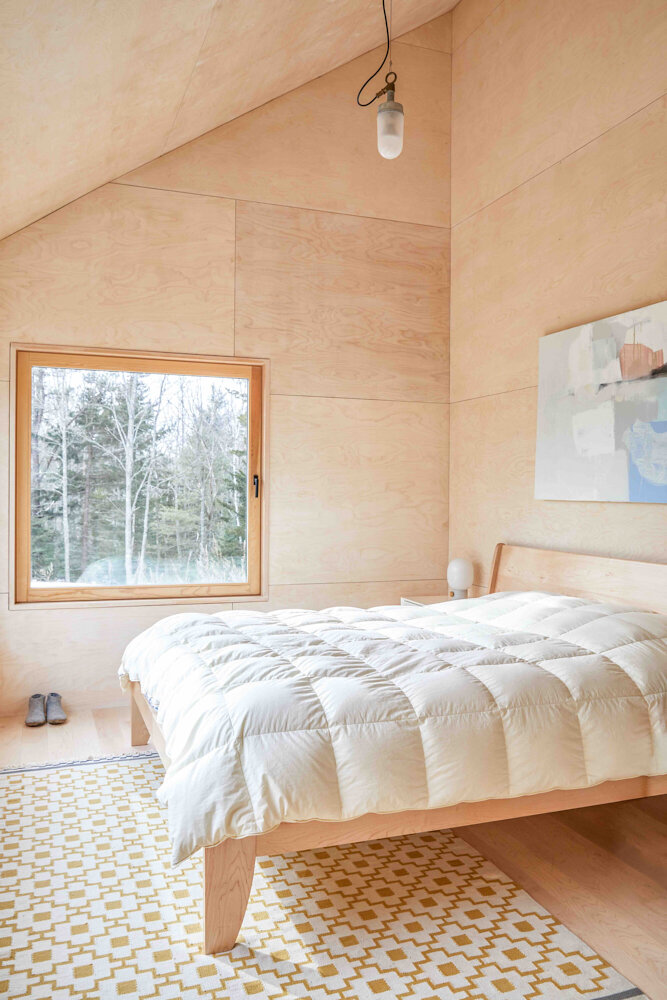 Artwork by Jenny Prinn and a patterned rug from IKEA add color and texture to the main bedroom’s restful simplicity.

Set back in the forest and high on a ridge in Cape Elizabeth, the 3,300-square-foot, four-bedroom, three-and-a-half-bath home offers single-floor living for the family of five, Julie, Scott, and their three young daughters. Built with rustic simplicity, the project, dubbed “House on a Ridge,” was awarded a Residential Merit Award by the American Institute of Architects Maine in 2019. And no wonder. The home’s distinct profile—a trio of staggered gables—is uniquely structured and impressively spare; even its front door is tucked to the side, out of view. Ornament-free, the buildings cut a clean line, clad in unfinished Maine cedar that will silver with time. This spartan sensibility feels right for the terrain, a forested thicket on a steep shale ridge (with a precipitous 35-foot drop) that inspired both architect and builder to think creatively, and quite literally, out of the box. Rather than build one large house, they built three smaller ones to “ride the ridge,” says Rob, with the main living and dining spaces interconnected in the first two, while the third, a family room over a two-car garage, is set at a discrete distance and reached via a deck and covered breezeway.

Lead architect Matthew Ahlberg explains, “We look at Nordic design a lot because it’s sort of appropriate for the type of climate and the type of geography that Maine has. We were looking at simple forms but really authentic materials. That tactile quality of the house is really important. We talked about having a house that looks great when you move in and all the materials are crisp and clean, and then as the family lives in it over the years, it shows the wear and tear, but ages very elegantly. A corner gets nicked, or a knob gets used more, and the patina changes with how the family lives in it.” 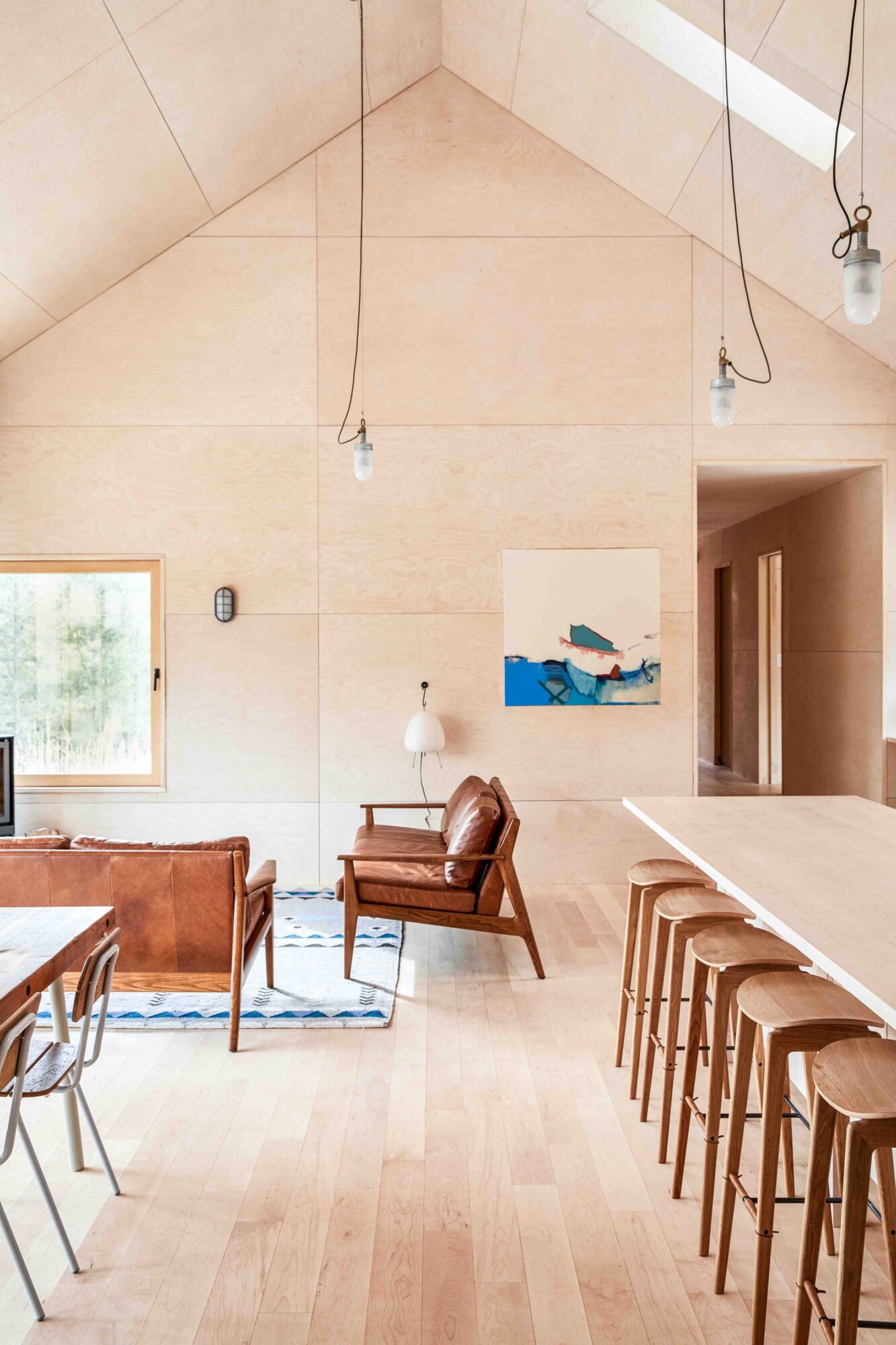 From the dining alcove, a glimpse of the cozy living area, where cognac sofas from West Elm are paired with a rug from House of Rym. 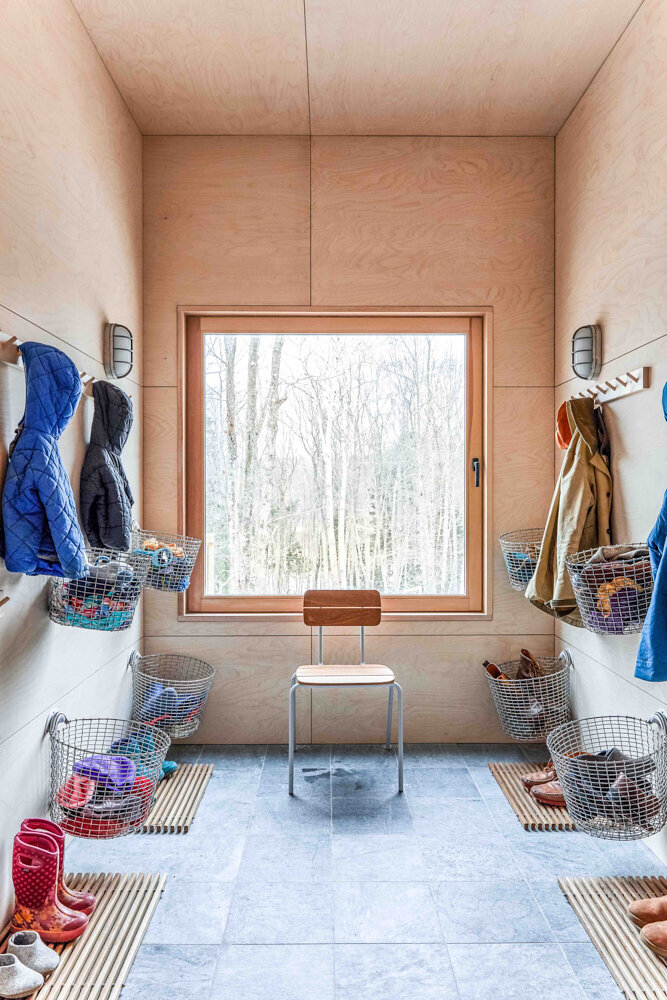 Mats by Skagerak Design and baskets from Korbo keep order in the mudroom of this family of five. 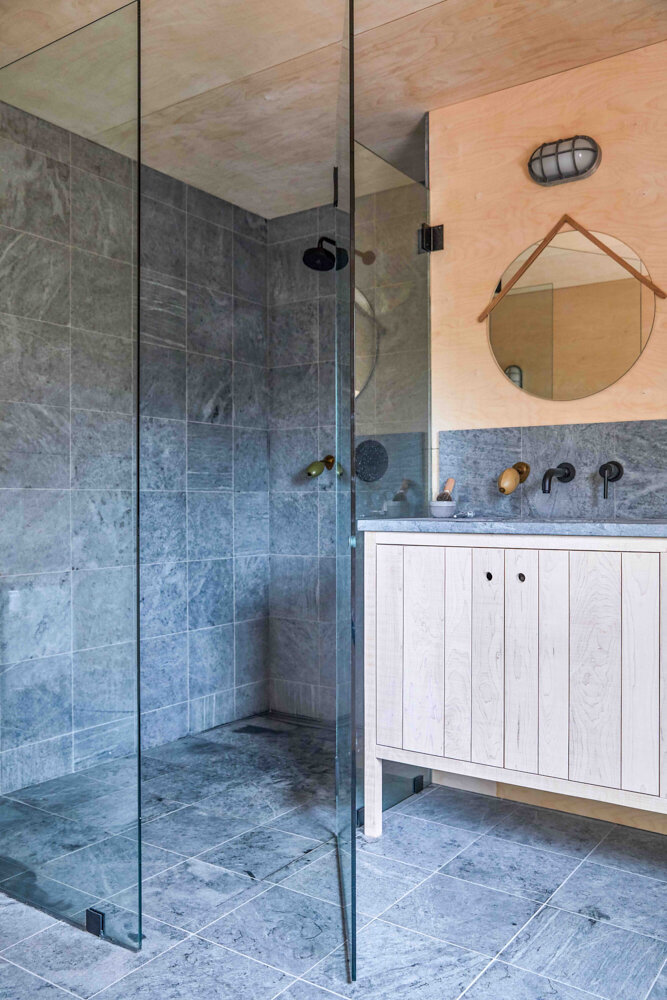 Floor-to-ceiling tile from Vermont Soapstone creates a uniform look in the shower and echoes the kitchen backsplash. A mirror from Harto hangs above faucets from Delta’s “Trinsic” series. 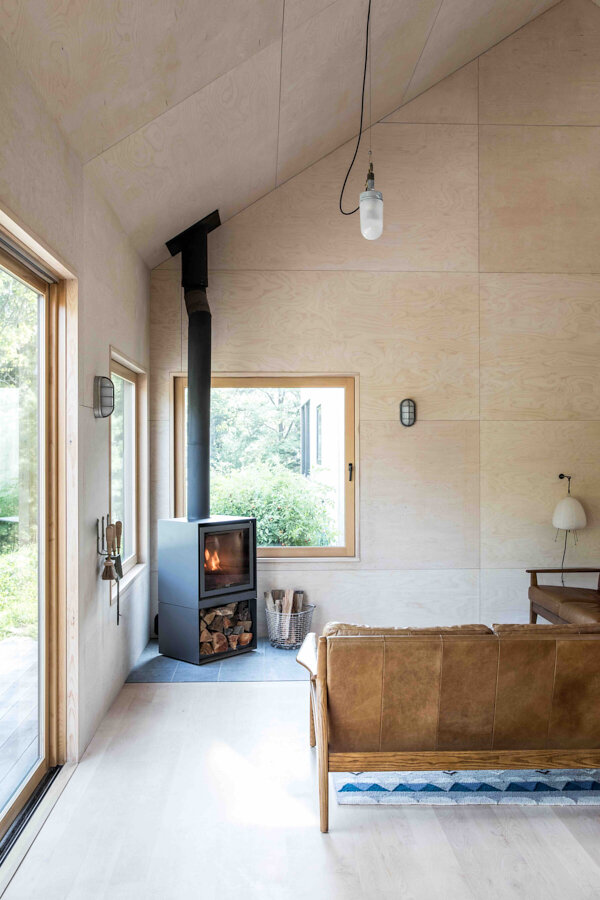 A woodstove by Stȗv keeps the living room toasty. Throughout, Edison bulb pendants and bulkhead lights from Davey Lighting illuminate with style. 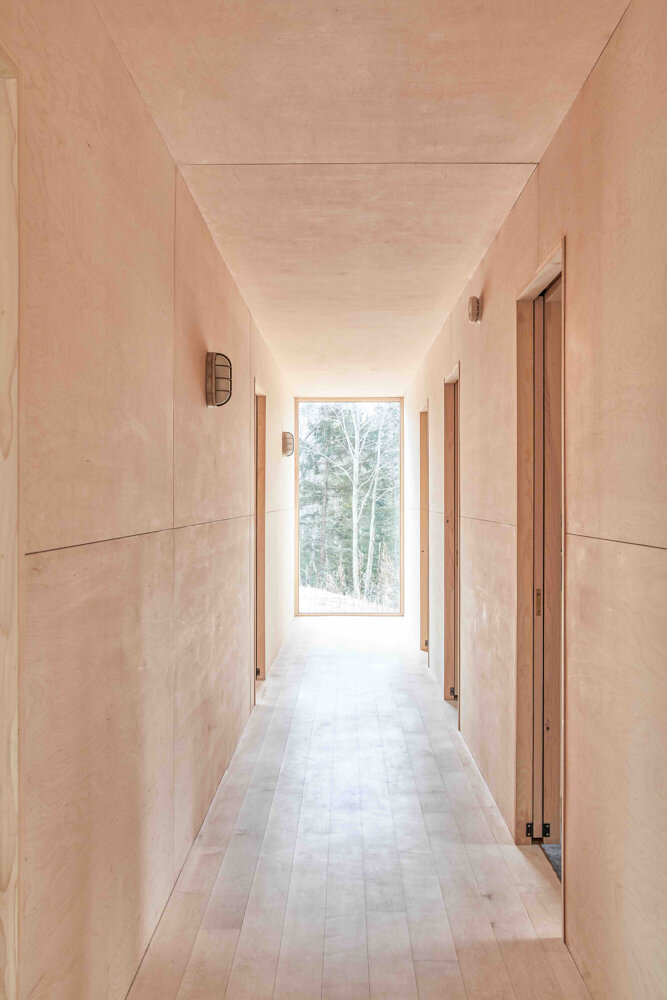 Pocket doors enhance the seamless appearance of the bedroom wing. A large window at the hallway’s end provides natural light.

“They’ve got three little girls, so it gets lived in!” chuckles Rob.

“In particular, the Baltic birch plywood is exceptionally forgiving to assaults by the pediatric population,” adds Scott, sounding every inch the doctor.

The home’s interior, composed entirely of said plywood, showcases precise seams, where the wood fits together as neatly as a puzzle. “It literally was put together with a jigsaw,” says Rob. “That’s how it came together. It really is all connected, with no room for error.”

“It was basically like a LEGO set that was reverse-engineered,” Matthew agrees. “Everything was organized and devised to be put together as a kit, all at once. A lot of thinking went into the clean lines and flush finishes.”

This scalpel-like precision seems apropos for the home of two MDs; Scott and Julie Pelletier are doctors of emergency medicine. They practice at Maine Medical Center, taking turns trading work and child care, and the simplicity of their home acts like an oasis of calm where they can shed the bustle and stress of their shifts.Since the pandemic, they have also made good use of the separate family room (called “the dojo”). Set up for table tennis and exercise, the room is now a “decontamination space” where the doctors can change clothes, shower, and grab a nap before rejoining family in the main house.

With their busy careers and a full family schedule, it is easy to see why the Pelletiers chose to simplify their surroundings. There is an ease to the home’s single-level layout and neutral color scheme. Their less-is-more aesthetic highlights the beauty of the natural surroundings, with each single-pane window granting a wooded view, captured and framed like a landscape painting.

In the open-concept kitchen, rough-sawn hardwood maple cabinets are paired with untreated soapstone counters and tile from Vermont Soapstone. Cabinet fronts conceal even the refrigerator, making for a spruce appearance, while long-line Edison bulb pendants from Davey Lighting illuminate the space. Down the bedroom wing, the rooms have pocket doors, further enhancing the seamless look, and at the end of the hall, a tall window lets in the forest view.

The white birch interior makes textiles and light the stars—as in the main living room, where a cognac leather sofa from West Elm and woodstove by Stȗv exude warmth and comfort. Triple-glazed tilt-turn windows from Jeld-Wen both preserve heat and are in keeping with the home’s European profile. In addition to the woodstove, a radiant heat system keeps the maple floors warm underfoot.

Maintaining such minimalism with a family of five (with three under age 7) is no easy feat and achieved in great part due to the many clever built-in drawers and cabinets Barrett Made fashioned to help corral the clutter. In fact, a favorite space of Scott’s is the mudroom, where built-in storage and handy baskets make sorting the active family’s gear a cinch. Julie loves the view into the forest canopy from the home’s breezeway, where the couple have hung swings for their girls to play on.

Says Matthew, “Scott was focused on the details but also on the big picture, conceptual ideas. That first meeting we had, he came with a lot of ideas that were rooted in Scandinavian cabin design. It was a common thread through everything.” 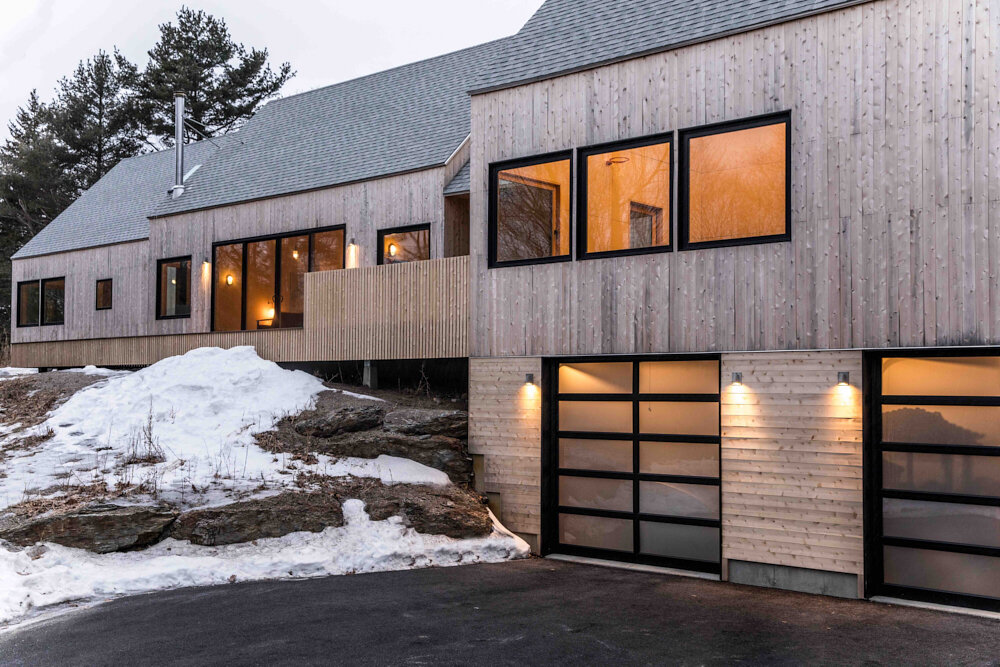 On a wintry day, the house glows warmly. The cedar-clad exterior is designed to meld with the surrounding forest. 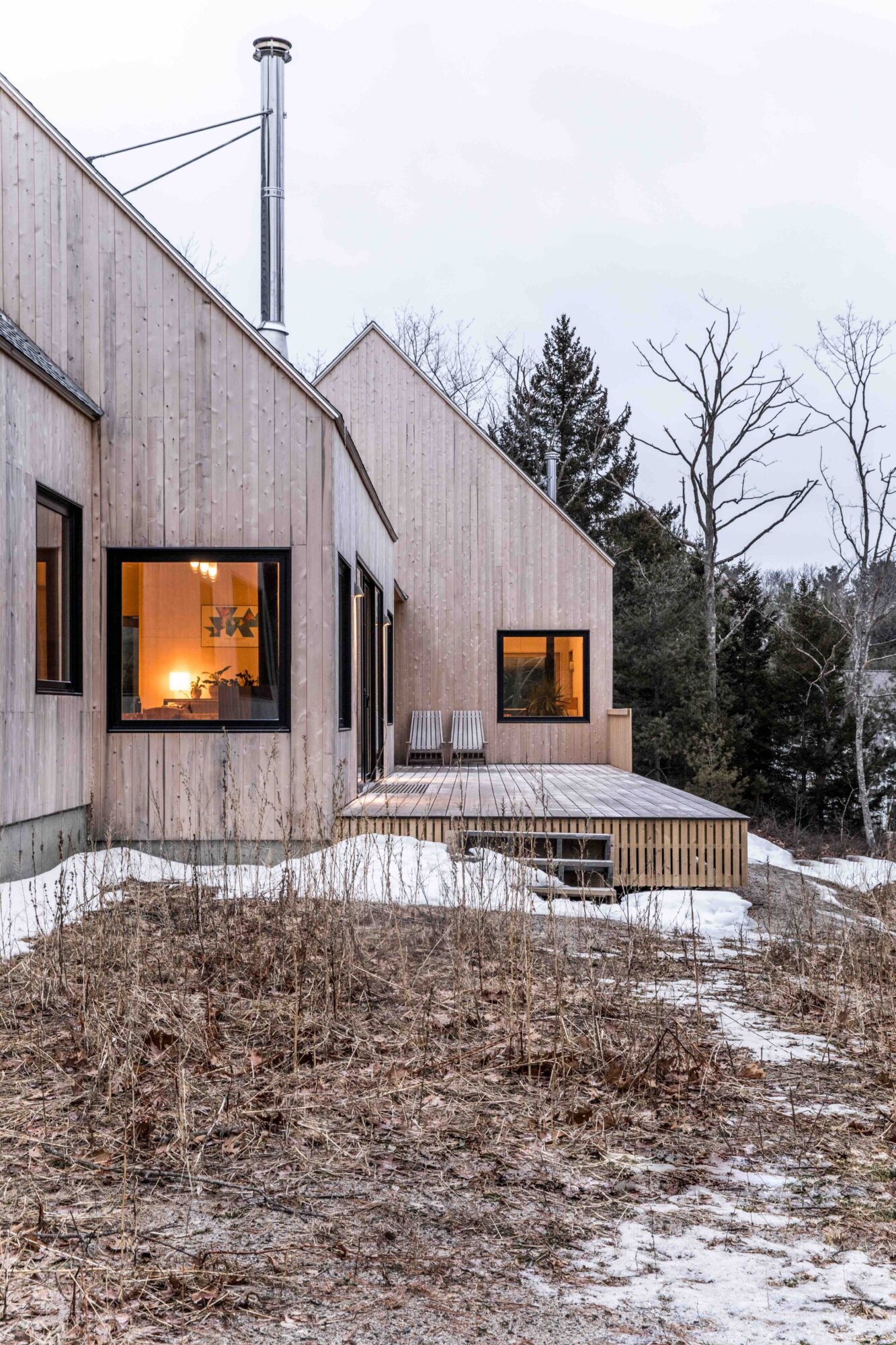 The home’s staggered gables, inspired by Nordic design, give it a clean, geometric profile. 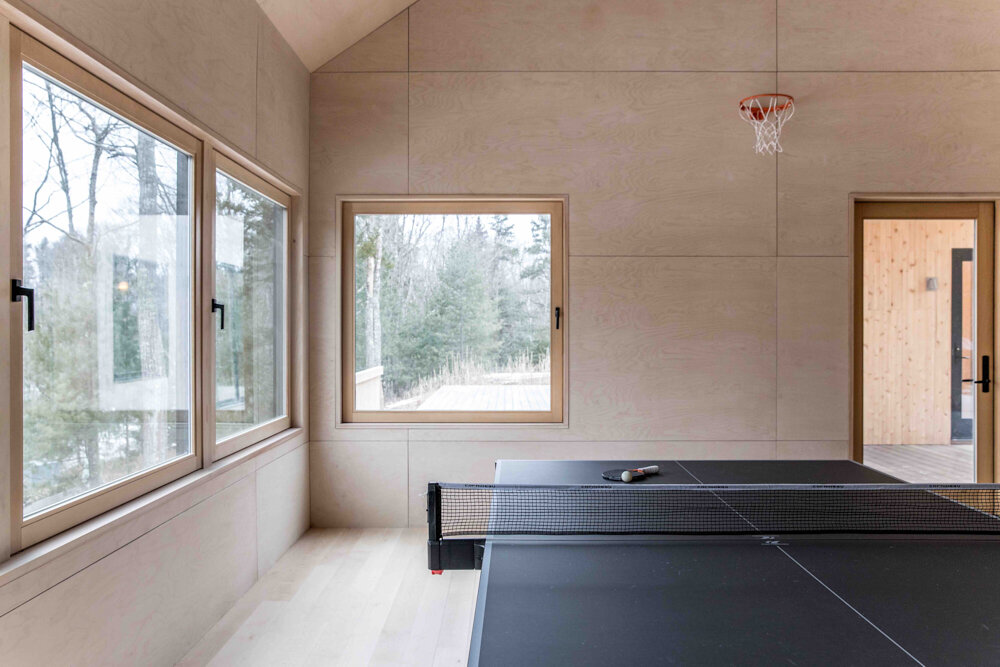 The “dojo” space above the garage hosts table tennis and exercise. During the pandemic, Scott and Julie also used it as a “decontamination” space after shifts. 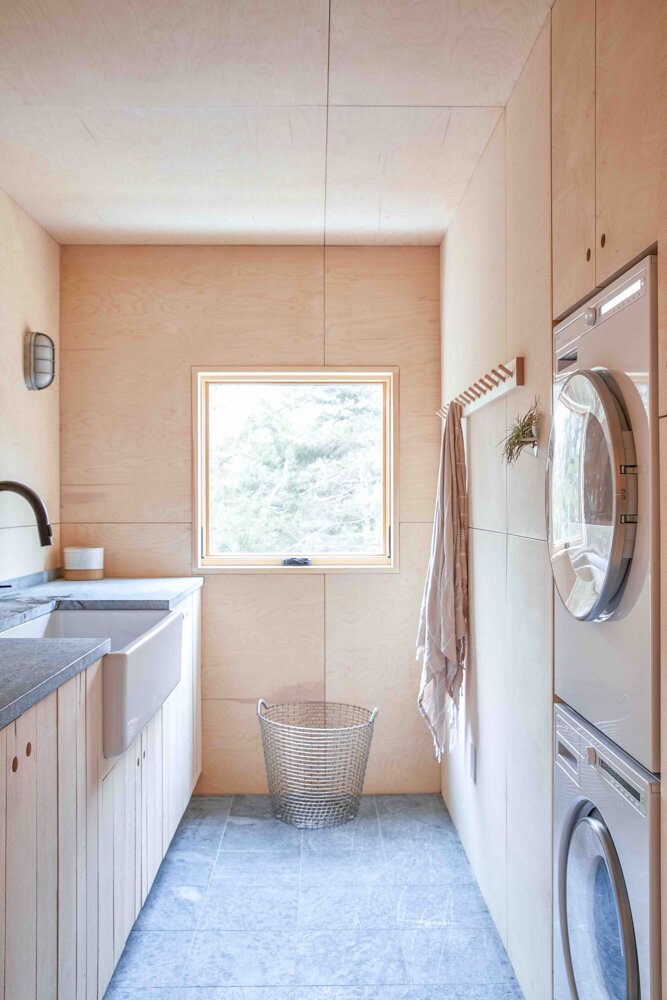 In the laundry, a stacked washer and dryer from Asko face a fireclay Shaws sink from Rohl.

“Scott was very involved, which is what we prefer,” says Rob. “We prefer real collaboration with our clients.” This collaboration was no doubt made all the more meaningful given the decade-long friendship between the Barretts and Pelletiers.

“We wouldn’t have built a house if it weren’t for Rob and Sydney,” beams Scott. “Barrett Made translated our vision for a home into something special.”

Situated on just under two acres of wildscaped property, where low-bush blueberries and forest abound, the abode blends easily into the sylvan setting, giving a young family the perfect place to put down roots and grow.