Across the Pond from Kennebunk 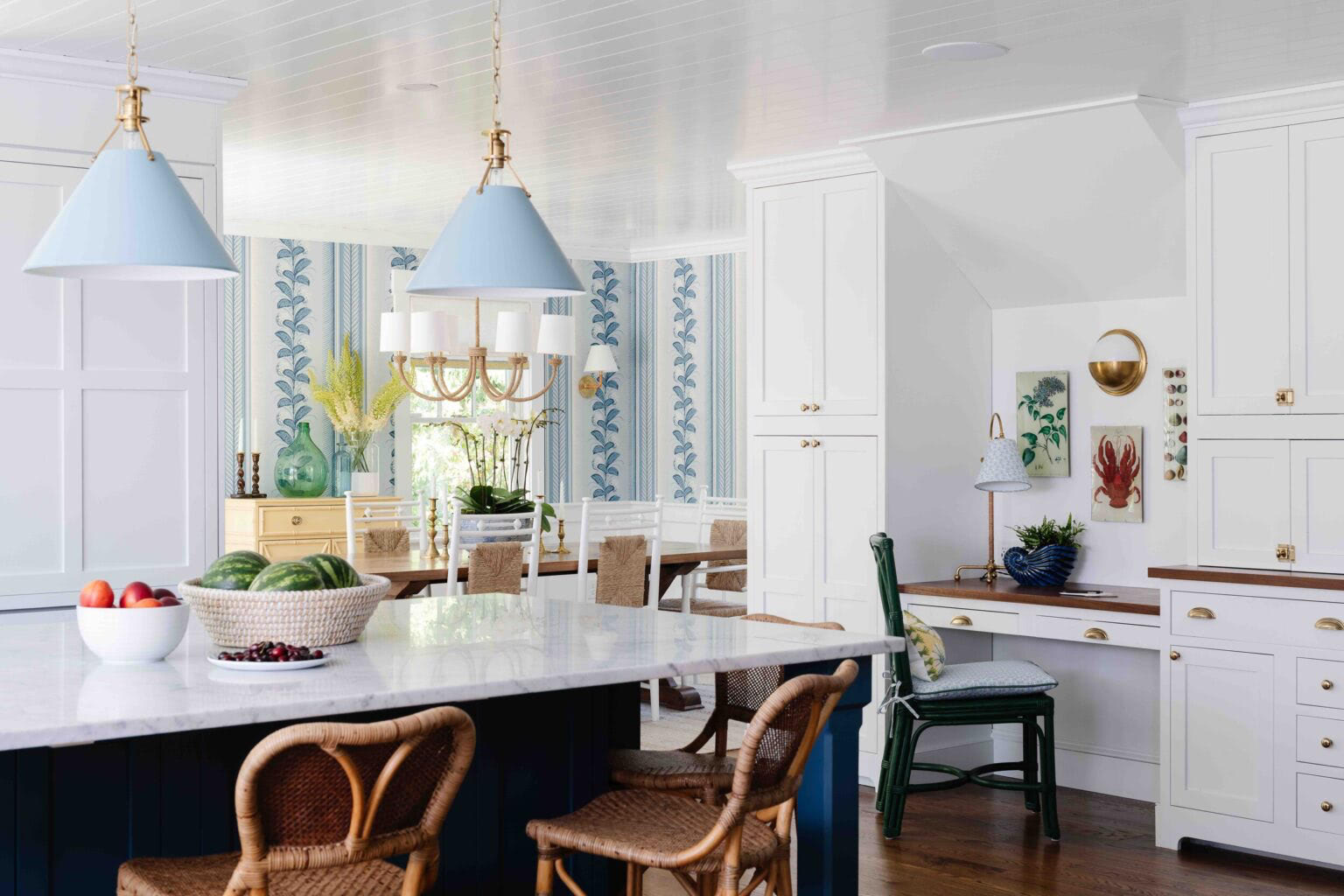 As a child growing up in St. Louis, interior designer Lauren Walsh dreamed of a life near the ocean’s edge. After graduating high school in her native Missouri, she moved east to attend college. There, she met the man she would eventually marry. Early in their courtship, the couple began spending their summers visiting his family on the Southern Maine coast. They spent many a long, lazy evening wandering through towns like Kennebunk and imagining a future life there. 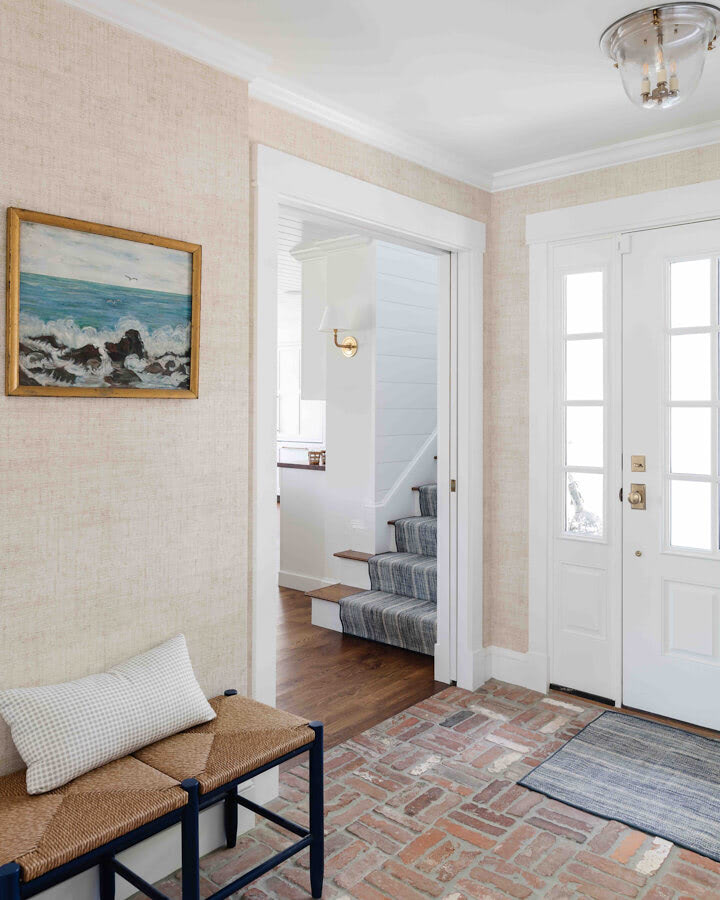 After they married and had their two children, the Walshes, whose main home is outside Boston, began spending summers in the iconic oceanside community. Their daughters attended camp at the nearby Kennebunk Beach Improvement Association, a century-old organization that has introduced generations of young people to sailing, island exploration, nature-based art, and more. Meanwhile, Lauren, her husband, and their Labrador retriever Cheyne (so named for the street where the couple lived while abroad in England) took long walks along the beach or up and down Great Hill Road, one of Kennebunk’s most picturesque thoroughfares.

Several years ago, they noticed a house for sale on that same street. Constructed in the early 1980s, it was very much a holdover from that era’s design aesthetic: a steeply pitched roof interrupted by rows of skylights, mauve-colored siding, an interior inconveniently bisected by a staircase and fitted with vinyl countertops and aging fixtures. When they returned the next summer, Lauren was not surprised to see the home was still for sale.

“I think a lot of people looked at the house and thought there’s no way it can be anything else,” she says today.

But she and her husband had just completed an ambitious renovation project in Connecticut, and Lauren, who graduated from the New York School of Interior Design and who worked at London’s Design Centre while in England, saw the house’s true potential. They purchased the property in 2018 and contracted with noted Maine architect Brian Beaudette, based in Kennebunk and Rangeley, to begin drawing up plans for its renovation. 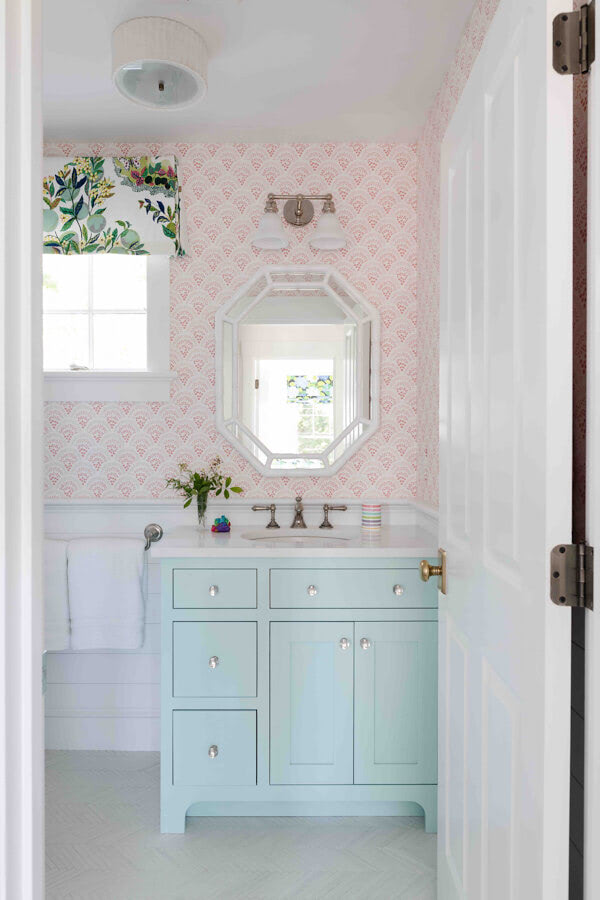 Pastels abound in the bathroom, noted in the Sister Parish wallpaper. 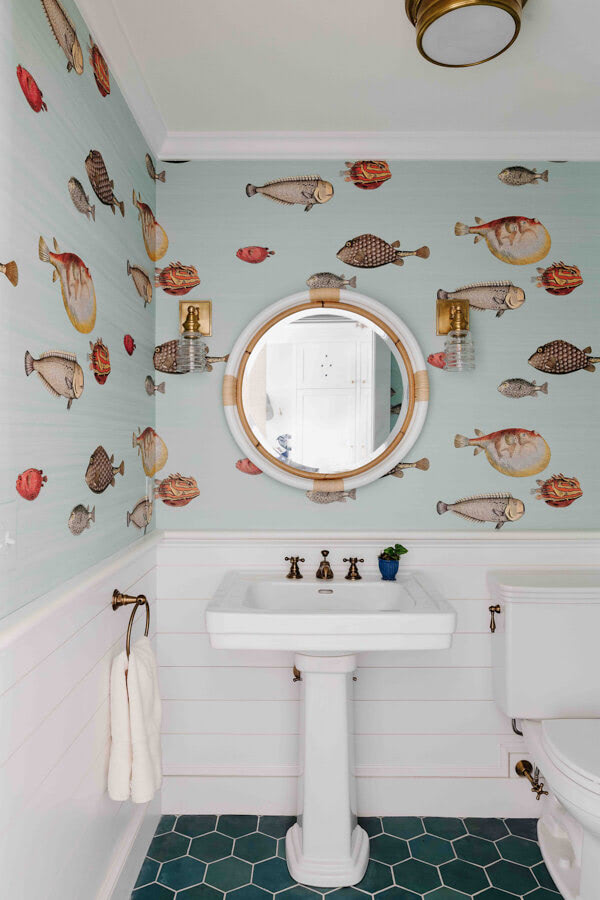 A great lover of older homes, Lauren knew from the start that she wanted her new summer property to evoke the timeless look of a classic coastal cottage. For the flooring on the first floor, she chose a combination of brick and character-grade wood. Complementary ceiling paneling helped create a charming, cozy feel, even in the home’s larger rooms.

The property’s proximity to wetlands limited the Walshes to only minimal additions to the house’s 2,200-square-foot footprint. With that in mind, Brian designed a clever octagonal sunroom that accommodated zoning and setback rules for the area but still increased the overall livable space in a meaningful way.

That sunroom also soon became the inspiration for Lauren’s additional design choices. While scouting for clients at the Boston Design Center, she came upon a rattan chair from the 1960s that she knew would be perfect for the sunroom. She chose a nostalgic print from the fin de siècle textile firm Brunschwig & Fils for the chair’s cushions and found in that choice a vision for the entire home.

“Suddenly, the whole house took on the greens and yellows and blues of that print,” Lauren says today.

That palette is reflected in the kitchen, which features a bold, colonial-blue island and complementary wallpaper. Her daughter’s bedroom combines white shiplap and a dramatic blue- and-black hydrangea print for a look that is at once classic and contemporary. Pops of whimsy also appear in Lauren’s wallpaper choices in smaller spaces, such as the home’s guest bathrooms, where cartoonish fish and mixed pastels greet guests.

Lauren admits her love of bold prints and florals is influenced by her time in London, where she developed a penchant for traditional English decor. A summer cottage, she says, is the perfect place to experiment with those kinds of design choices.

“Because this is our second home, I was more willing to take risks,” she says. “Bright, fun colors and fabrics are part of what makes this a special place to go.”

For the upstairs guest bunk room, Lauren indulged her love of nautical themes: navy-blue stripes, red industrial fixtures, oar-bedecked wallpaper, and a hemp rope that serves as a banister up the narrow staircase that leads there.

“I just adore that room,” she says. “As a designer, it’s a dream come true to have a beach house and be able to decorate it for yourself.” 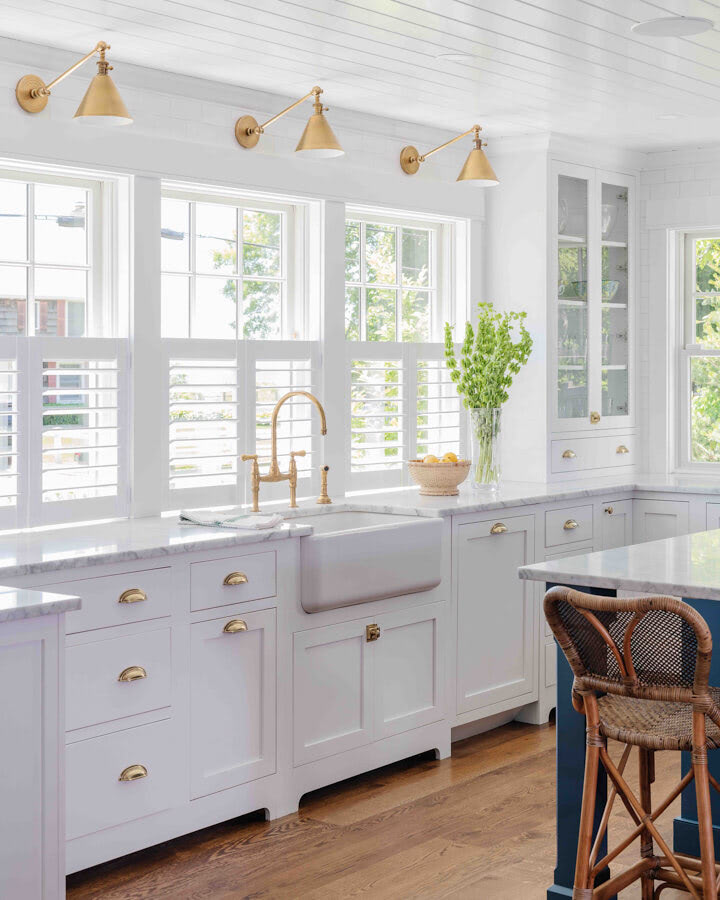 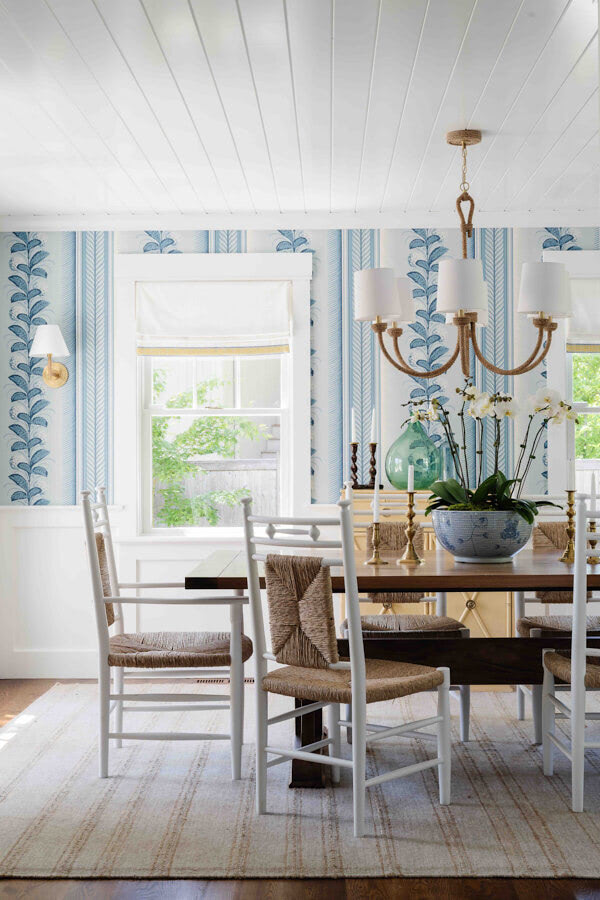 An elegant table from Dettorre Furniture decorates the dining room. 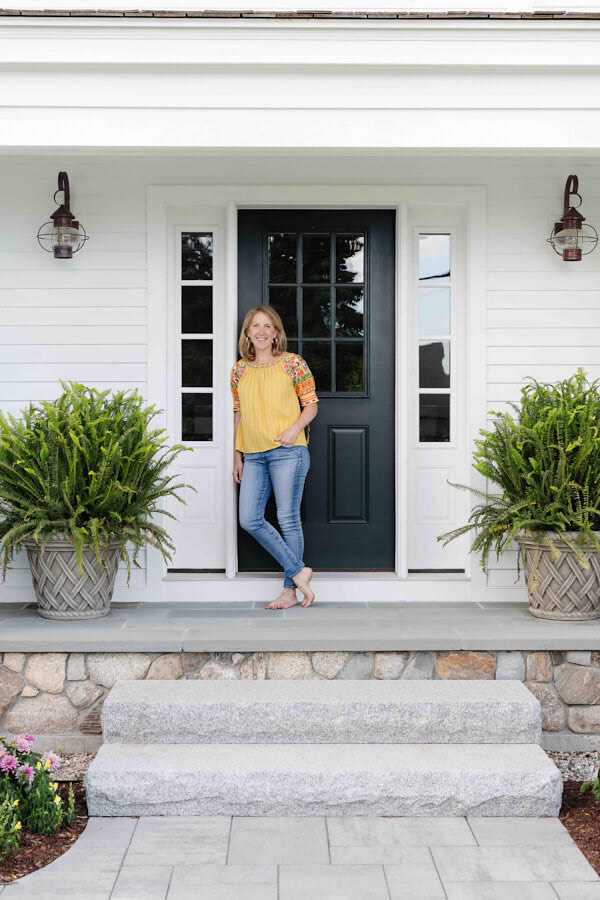 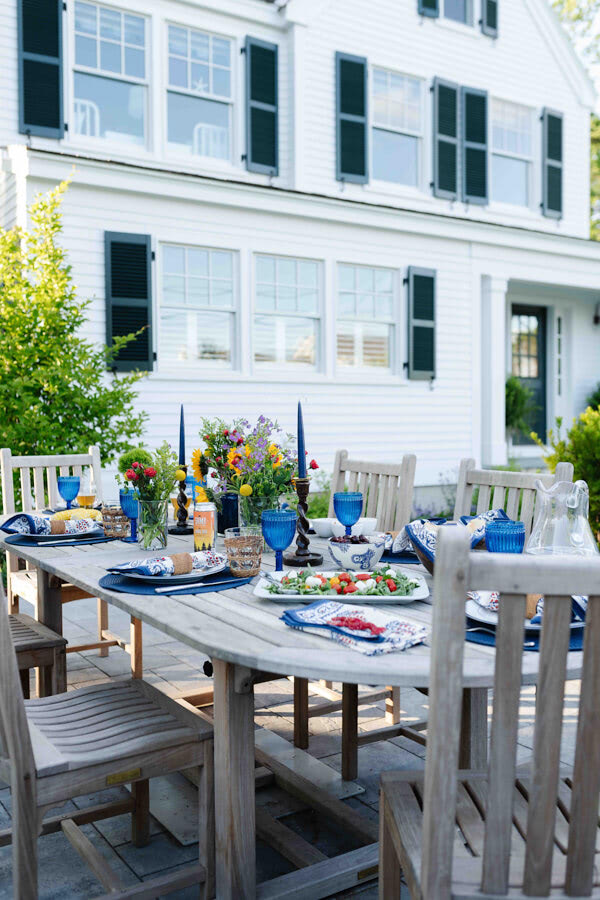 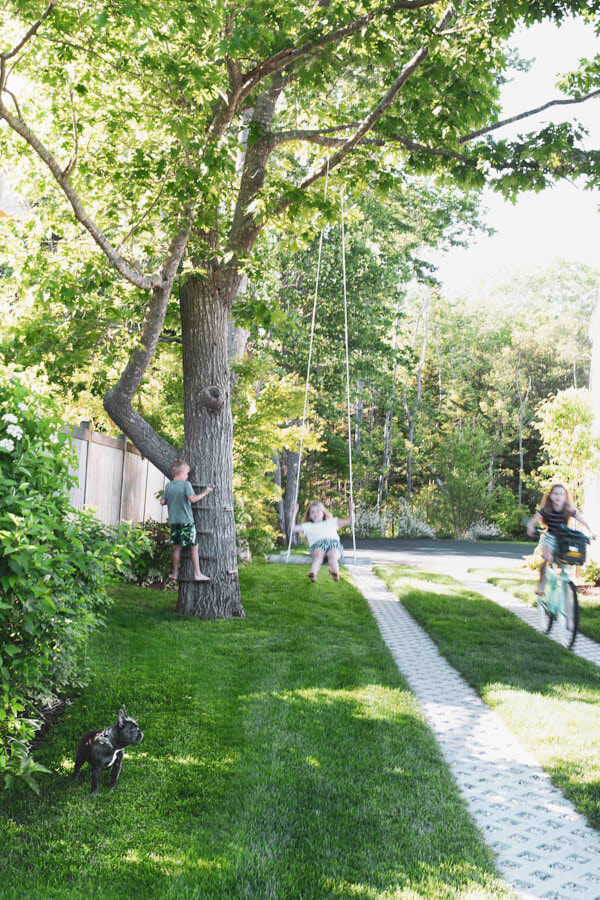 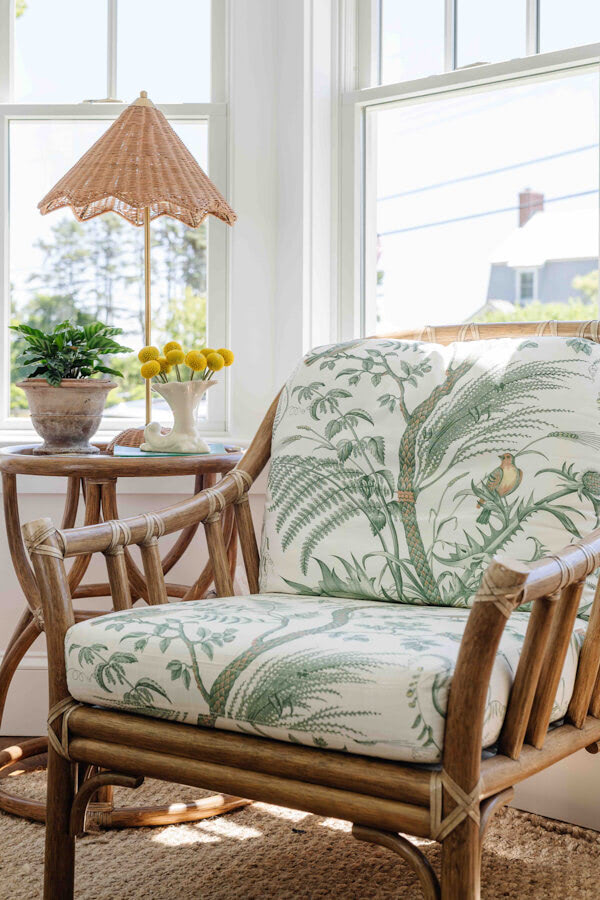 A vintage chair covered in fabric from Brunschwig & Fils. 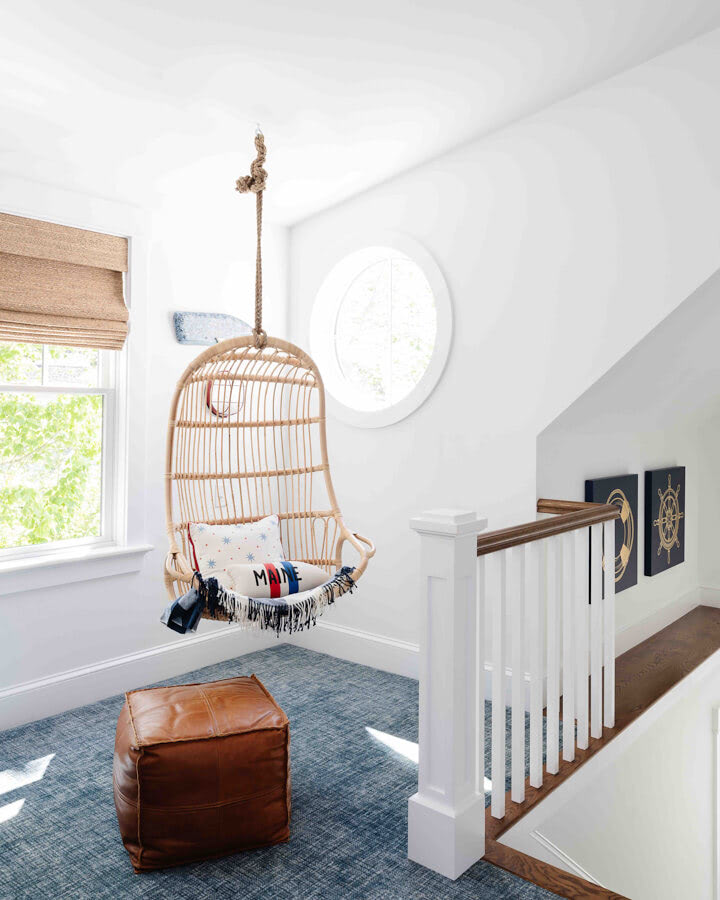 A Serena and Lily hanging chair is decorated with a Maine pillow from Hurlbutt Designs. 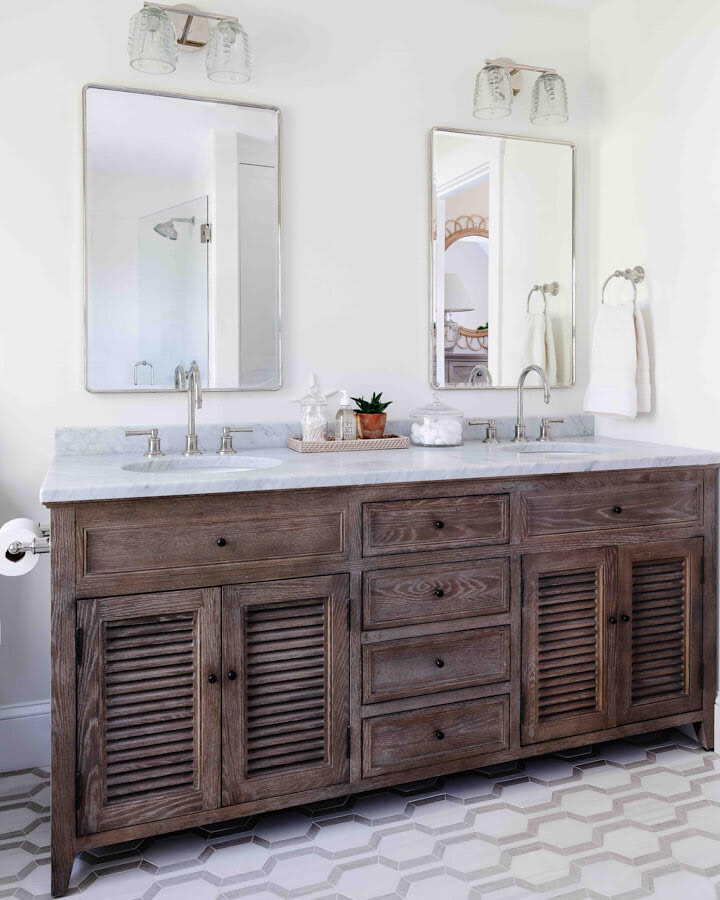 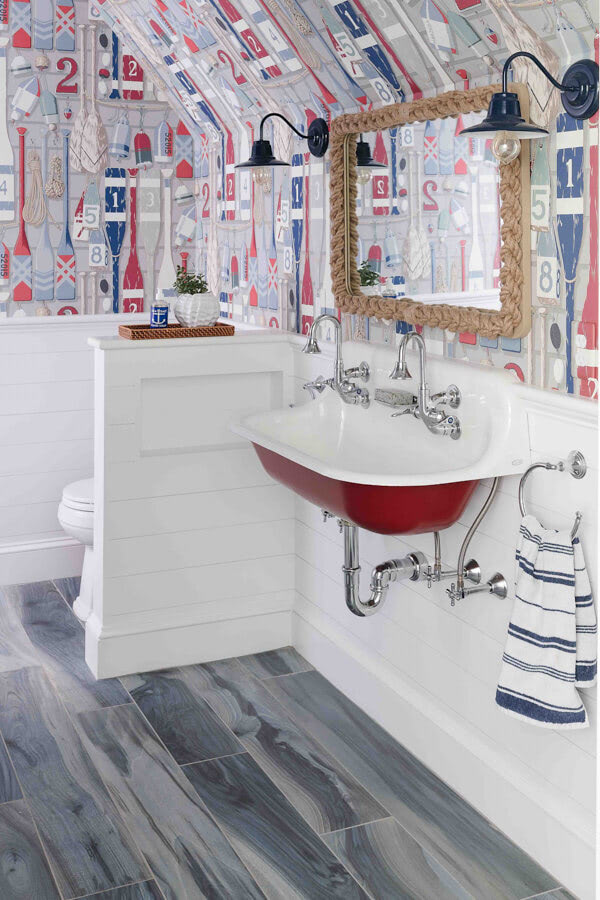 Never one to shy from bold prints, Lauren chose a busy print bedecked with buoys for the bunk room bath. 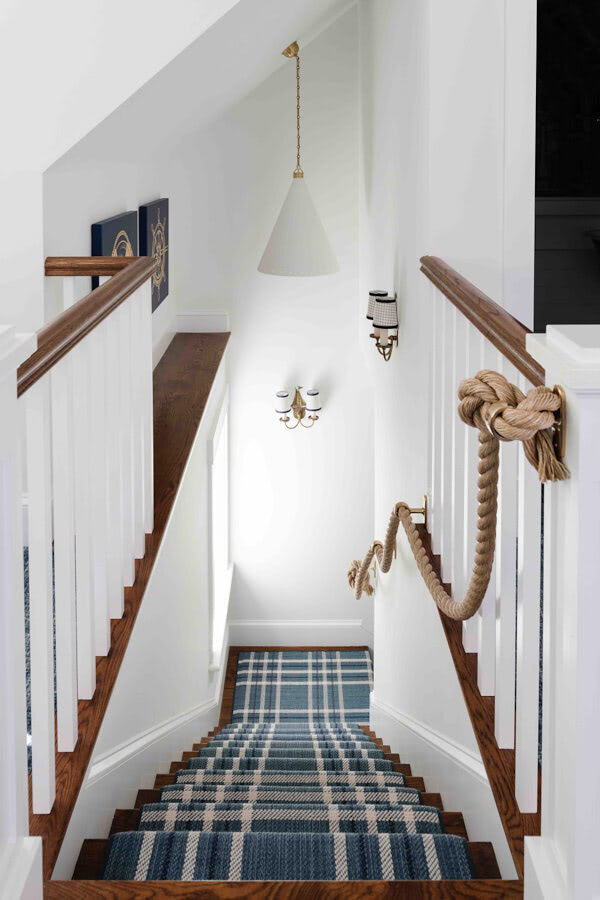 Rope railing from Knot &amp; Rope Supply and runner from The Carpet Workroom. 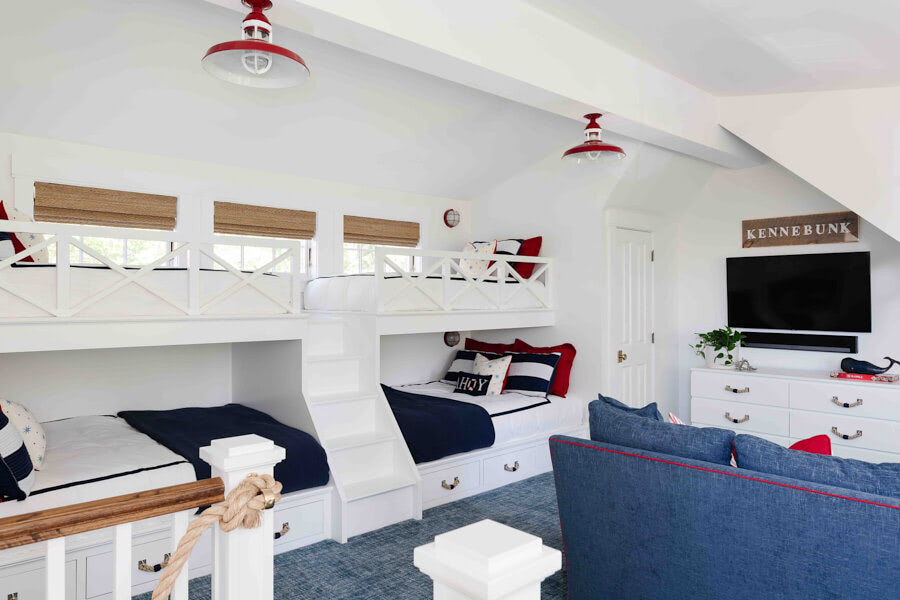 The nautical-themed beds in the bunk room were custom built by Spang Builders. Carpet by Ben’s Flooring.

More than that, she says, the recent renovation was also about decorating a space that friends and family would want to visit. A newly completed outdoor patio surrounded by privacy hedges serves as an outdoor dining area for alfresco family-style meals, and the large stone fireplace in the home’s expanded living room by Embers Stoves & Fireplaces is the perfect centerpiece for long, leisurely evenings. Thanks to Brian Beaudette’s design ingenuity, the Walsh home now sleeps 14 comfortably, and Lauren is eager to fill those spaces with loved ones now that Covid restrictions have made interstate travel safer and easier.

“When we come to Maine, we’re getting away from our everyday life and ready to relax and have fun with our friends and family,” says Lauren. “I feel so fortunate to have been able to fill this space with things I really love.”