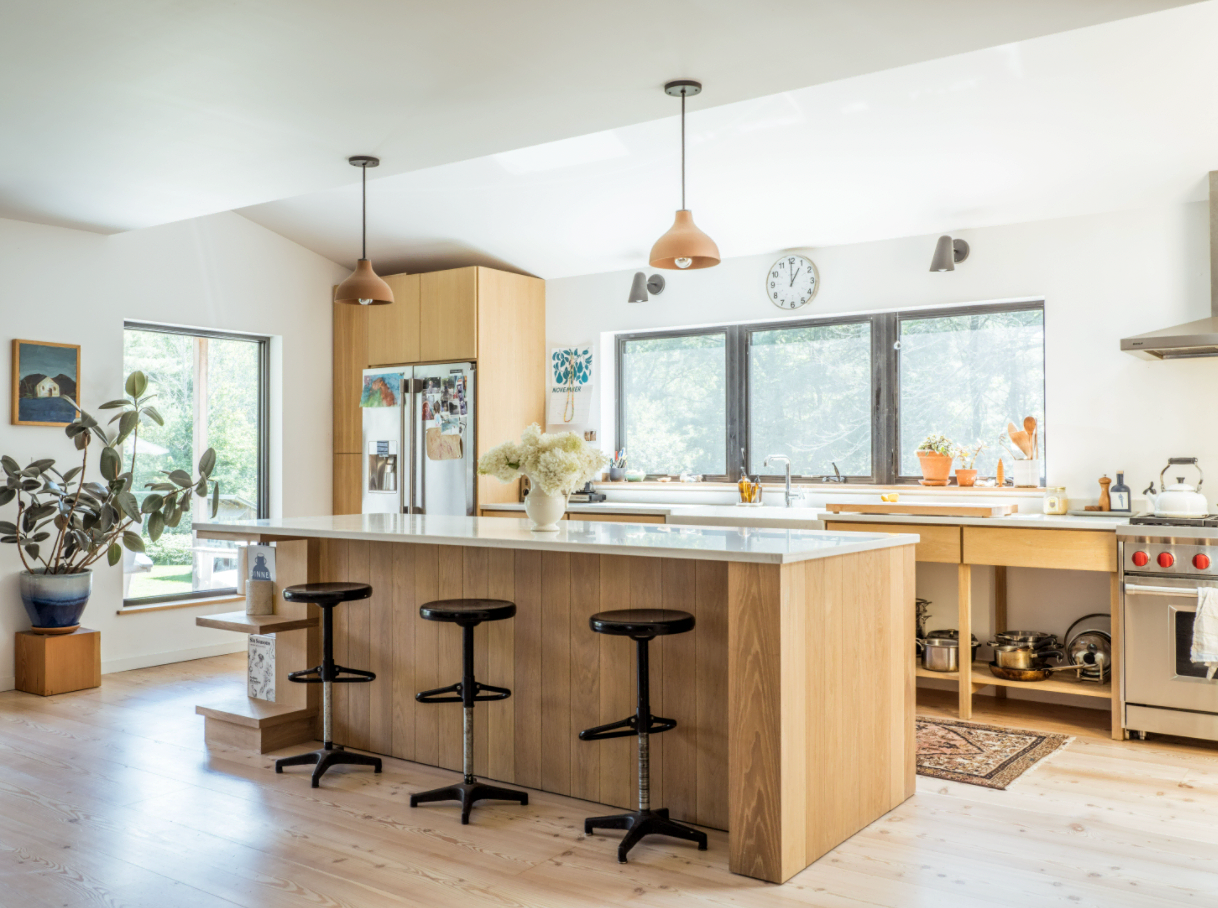 When Katie and Brad Bowes were newlyweds working in New York City a few years back, rural living was never far from their minds. Although they enjoyed all the city had to offer, both were raised with easy access to the wilderness (Katie in Wilton, Connecticut, Brad in Durham, New Hampshire) and were country mice at heart. “In Williamsburg [Brooklyn], that was always the discussion,” shares Katie. “‘Where do we go where we can create this free space for our kids, with grass stains on their knees?’ and all that.”

Katie says, “We moved in and were like, ‘Oh, this place is so cute. Maybe down the line, we’ll tweak a few things, update the bathrooms or whatever.’” Then winter arrived and forced their hand. “You could put your hand up to any window or floorboard, and there was just this cold breeze that would come in. I’ll never forget, I walked in one morning to get our son out of bed. He was 1½ at the time and his teeth were chattering.” A comprehensive renovation was planned stat! In the 15 months that followed, they welcomed a daughter and juggled both new parenthood and extensive construction.

Thankfully, as the founder of the Portland-based design-and-build company Joiya Studios, Brad was more than up to the job. Locals are probably acquainted with his handiwork in the sleek, hip interiors of Portland favorites Judith, Cong Tu Bot, and the dearly departed Drifters Wife. Brad drew up the designs and enlisted the help of John Sparre Builders to complete the structural renovation and exterior while he overhauled the interior.

The project was not without its challenges.

“As soon as we opened it up, there were major structural issues and mouse nests, just everywhere,” Katie adds. The home required new just about everything: insulation, foundation, windows, siding, roof. Brad switched gears and built an apartment over the barn where they could live in the meantime. But that construction had its own particular hurdles, including flying squirrels.

“The flying squirrels was actually a very endearing moment for our family. They became like your buddies,” Katie teases.

Originally a four-bedroom, one-and-a-half-bath house, the current 2,300-square-foot space was reconfigured to extend the kitchen and add a full bath. “It was a charming house, but it didn’t have this historical character you were trying to preserve,” notes Katie. Additionally, the statuesque couple (Katie is 6 foot 1 and Brad, 6 foot 3) wisely resituated the kitchen and living room into the high-ceilinged addition, moving the dining area, den, and playroom into the snugger, Colonial portion.

While updating their rural home, the Boweses prioritized fine finishes and appliances, which played directly to Katie’s expertise. In New York, she worked as a buyer for One Kings Lane and locally in merchandising at L.L. Bean. The Post Supply, her recently launched online boutique, offers traditional, utilitarian home goods, with a store slated to open in winter 2021, just down the block from Joiya on Washington Avenue.

The couple’s love for clean, pared-down aesthetics led the redesign. Indoors, exposed beams and lye-stained floors suggest rustic simplicity. “We were inspired by Scandinavian farmhouses,” says Brad. Striking exterior choices, cladding the home in white cedar siding and reorienting the entrance to the back, resulted in a smooth facade with light-giving casement and fixed-pane windows. As the cedar silvers, the home will blend further into the wooded surroundings.

“For us, it’s really important that it feels welcoming and warm and fits in Pownal, Maine,” says Katie.

Brad fashioned a spare stucco hearth on the existing fireplace to give the family a cozy spot to gather, while the adjacent den is a bookworm’s dream, with brimming shelves, listing stacks of books, and a Jøtul woodstove to combat even the coldest winters.

A portion of the wraparound porch was enclosed to expand the well-appointed kitchen. A Wolf range feels more a necessity than splurge, Katie reasons, as country living makes for scarce take-out. “We can’t even get a pizza delivered here!” 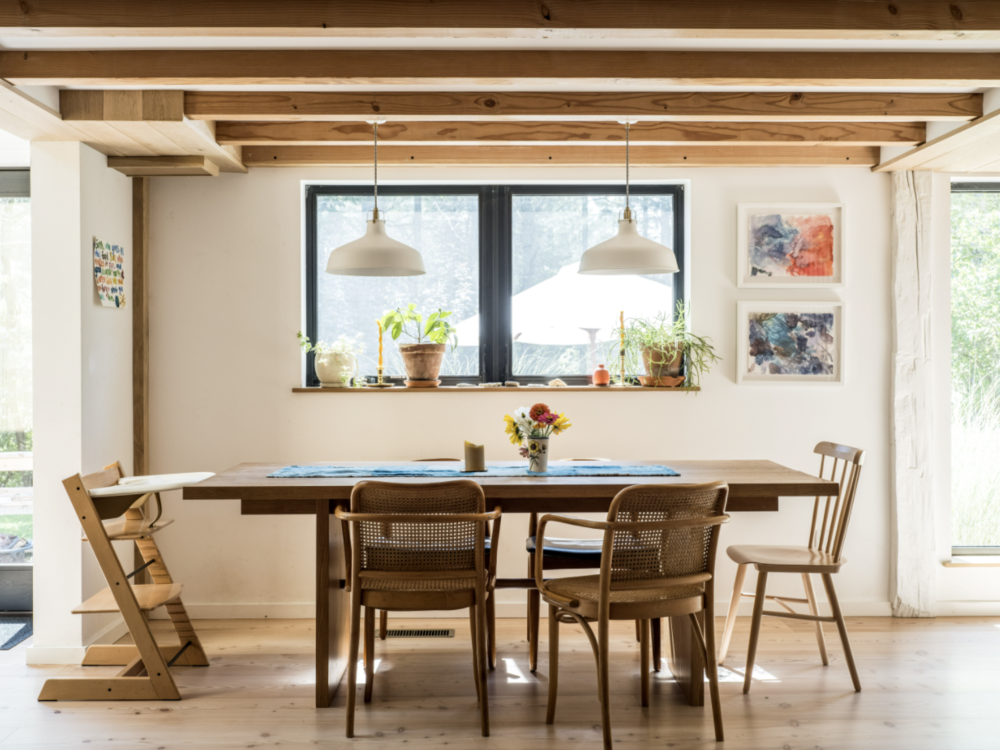 A dining table from Joiya Studios is paired with vintage Thonet chairs found on Etsy and a Stokke high chair. Artwork by Jasper. 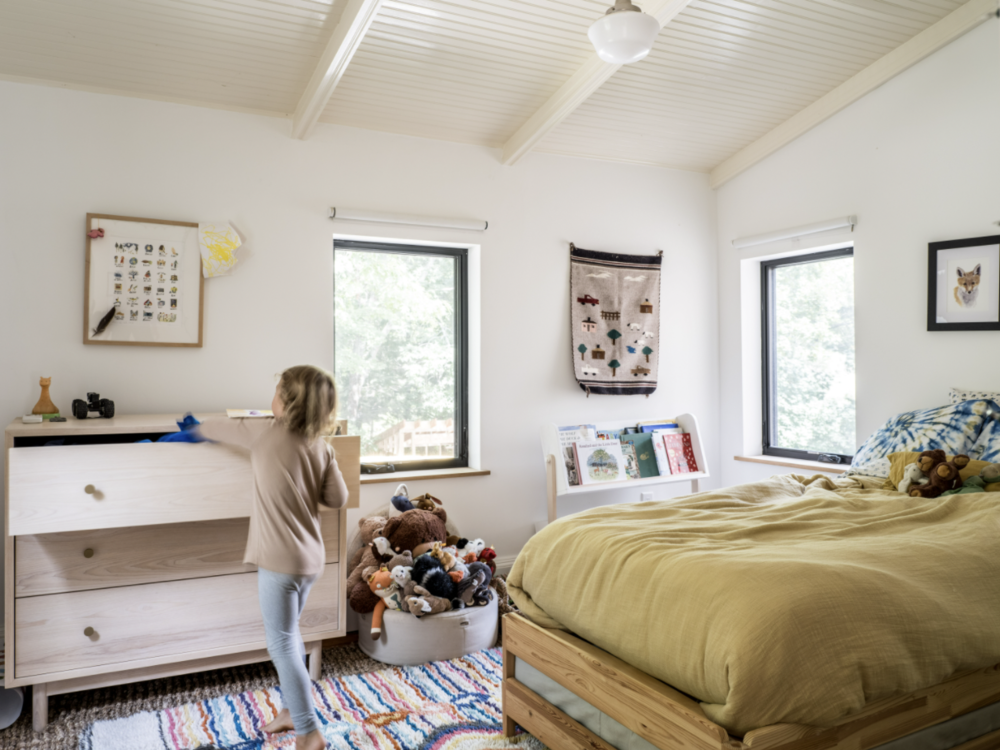 Jasper’s room is anchored by a carpet from West Elm and a dresser built by Brad. 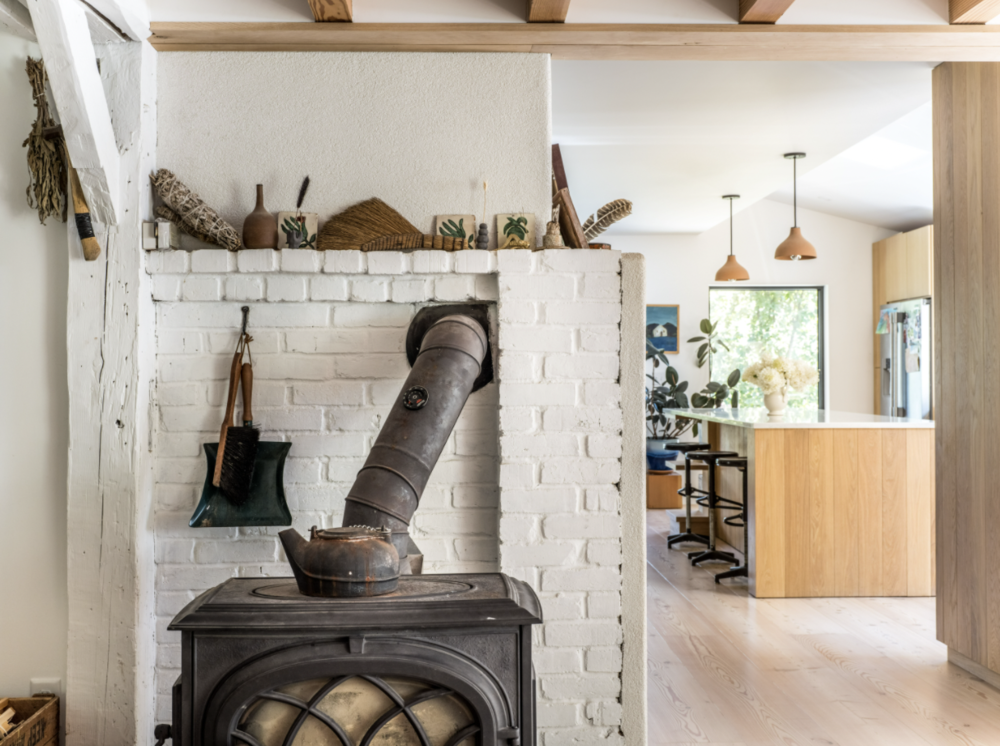 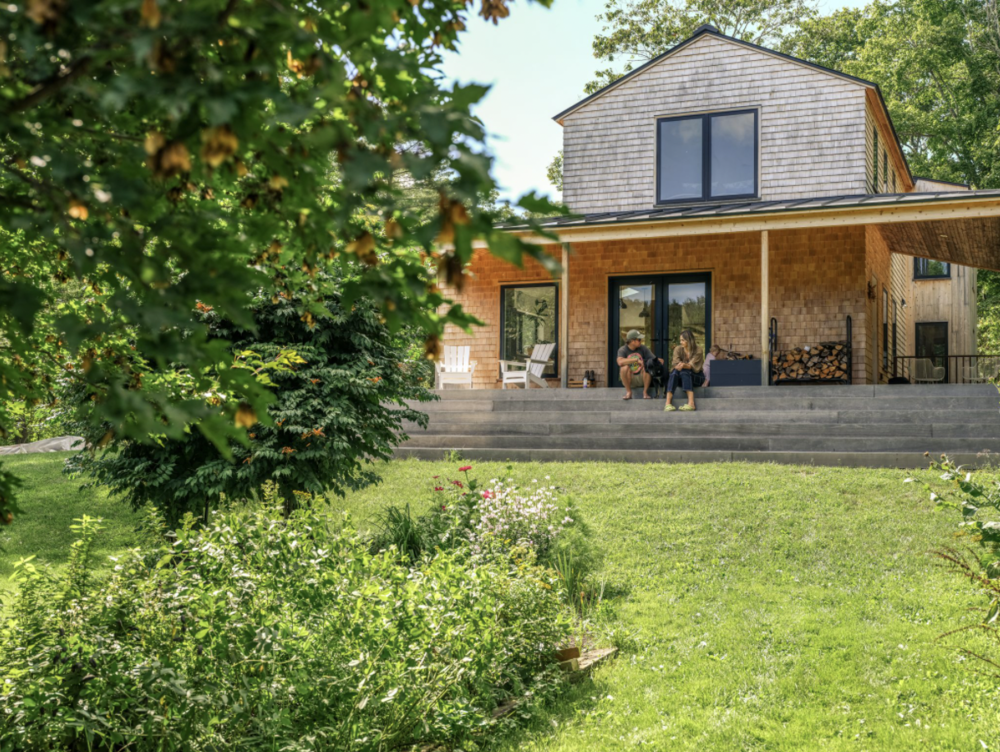 The deck’s wraparound steps are a favorite spot for the family to relax and enjoy the outdoors.

Upstairs, the bedrooms are kept simple, painted Sherwin-Williams’s Chantilly Lace in harmony with the rest of the home, where unadorned windows let in sunrises and garden views.

Outdoors, the Boweses landscaped their three acres and restored gone-to-seed gardens with assistance from Primal Blossoms in Portland, planting herbs, vegetables, berry bushes, and fruit trees. An outdoor shower and fire pit extend their living space, with plans for a sauna. For now, Brad and Katie are content to enjoy their home and garden, a work in progress that will grow along with their family. Of the renovation, undaunted by neither weather nor wildlife, driving snow or flying squirrels, Katie says, “We’re so happy. It’s exactly what we wanted.”