An Edgecomb couple combine cultures to create a space that celebrate the Maine coast and Argentine hospitality—with a grill to thrill
Words By Allison Paige
Photos By Michael D. Wilson 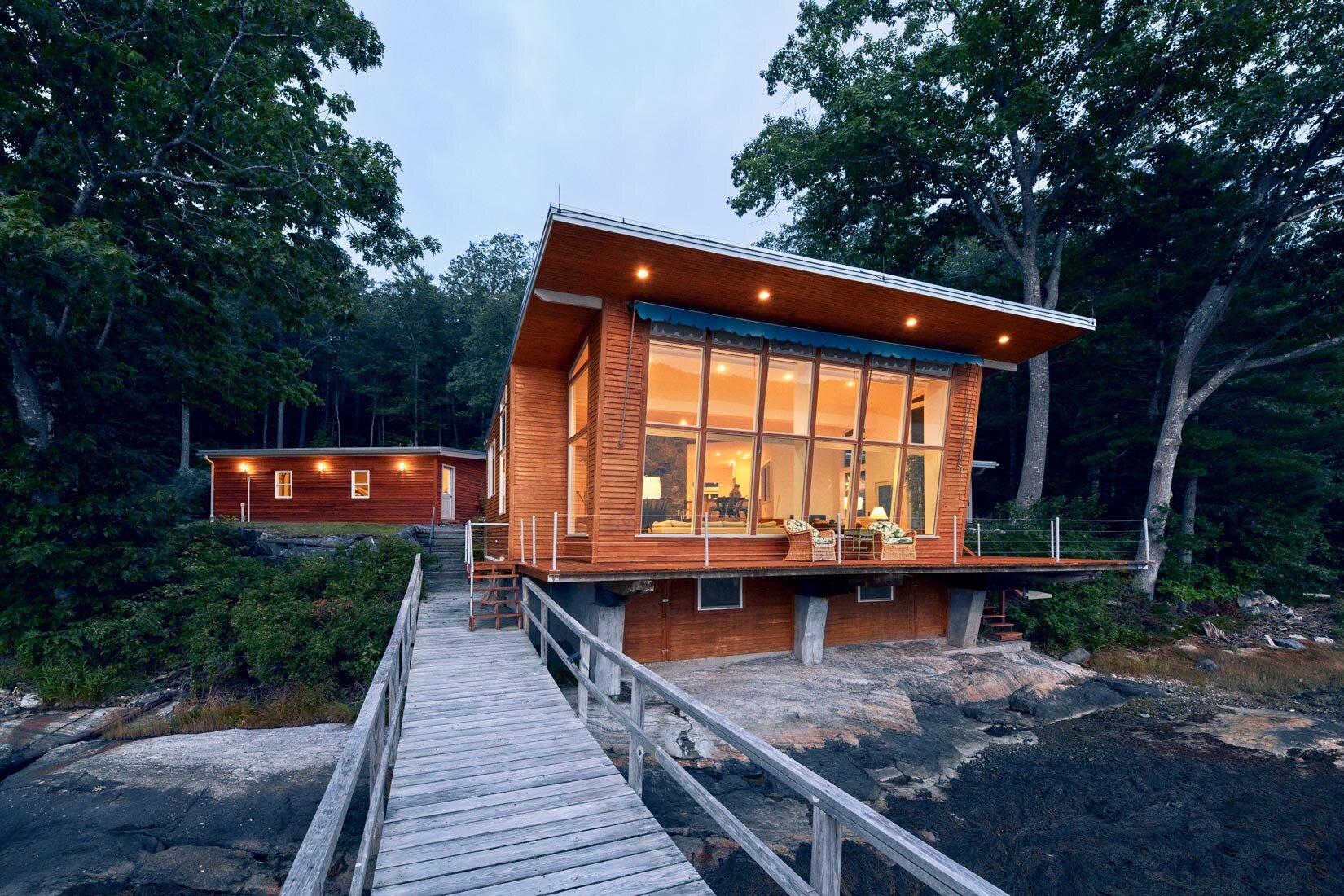 Perched at the edge of Sheepscot River, the house of Steve Doyon and Paula Valenza in Edgecomb feels like a bit of a secret—found at the end of a winding road where a sign reads: “La Escondida Del Mar,” The Hidden Sea.

Paula is from Argentina, and Steve, born in Presque Isle to Maine natives (Mom from Caribou, Dad from Augusta), moved away as a youth and found his way back by happenstance. As the CEO of Novatus Energy, a renewable energy platform based in New York City, he was driving up to a company retreat when he rediscovered the charm of the midcoast.

When the New York–based couple searched for a second residence, they were surprised to find this cedar-sided midcentury-style split-level after a sea of traditional Colonials. The house, seen in profile, seems to jut over the riverbank, almost as if it is doing a balancing act.

“You almost feel like you’re on a boat because it’s right over the water,” says Steve. Eleven-foot tides rise up and water rushes from the nearby waterfalls.

The couple love to entertain and were eager to create an outdoor space where they could hold Argentine-style asados. An Argentine asado, or barbecue, involves grilling a variety of meats on a special grill called a parrilla. (In fact, the word “barbecue” comes from the Spanish barbacoa.)

“The first time I went to Argentina, Paula introduced me to one of her brothers-in-law, he’s sort of the grill master of the family,” says Steve. “I’d heard about Argentine grilling, but I didn’t really know what it was all about.”

Asados can take many hours and are not to be hurried; socializing and savoring are precisely the point.

It’s a long, slow process and Steve became smitten by it. “When I first saw one of these, I thought, ‘Wow, I’ve got to have one!’” he laughs. Luckily, he found a company stateside that makes parrillas, the Pennsylvania-based, Argentine-run Gaucho Grill.

He hired contractor and landscape architect Theo Congdon of Redtwig, who assembled a team of local craftsmen to create an outdoor space that combines Maine’s coastal cool with some Argentine fire and flair.

Working with preliminary plans from Knickerbocker Group and Carson Douglas Landscape Architecture, Theo’s first mission was to lower a hill by the oasis-like pool and carve out space for the terrace, staircases, and landscaping. Birch were planted, along with evergreens, rhododendron, and climbing hydrangea. A boulder wall serves a dual purpose, to shore up the area and add a dose of craggy topography.

“In terms of function, the space had to work with all the concepts of the asado and entertaining a dozen or more people,” says Theo. “What is most pleasing to me is the scale of all the elements. The house, the pool deck, and the kitchen terrace that we built all have a scale that worked together and feels right.”

The parrilla was constructed with an insert from Gaucho Grill and surrounded by boulders, granite counters, and flagging from J. C. Stone that make it look like part of the landscape.

Subcontractor Jared Grant of Shangri-La Stoneworks in Belfast says, “In Argentina, a parrilla is typically constructed entirely out of brick. But on the Doyon parrilla, the architects blended a native Maine granite for the majority of the structure and utilized brick accents in the actual cooking space, a combination that brings the two cultures together nicely.”

Paramount to the space was a table to seat many. Neighbor Eric Graves, the president of Boothbay Harbor Shipyard, had just the thing—an enormous 4-by-12 slab of angelique wood left over from a re-creation of the Discovery, one of the ships that carried the first English settlers to Jamestown, Virginia.

Steve had the notion to use a boulder to support the table, and Theo found just the right one on his property in Tenants Harbor. Local stone sculptor Lance Carlezon cut a niche to fit the tabletop, creating a one-of-a-kind wood-and-granite dining table. He complemented it by carving out the top of another boulder to create a deep drink basin.

String lighting held up by ship’s rigging gives the area the feeling of a full-time fiesta.

“A parrilla in Maine just makes sense on every level,” says Jared. “The slow summer days and nights and relaxed Maine attitude blend perfectly with the Argentines’ notion of community and social gatherings.”

Of course, it wouldn’t be a Maine celebration without our most famous crustacean. A burner by the grill was added expressly with lobster in mind—so that guests can enjoy lobster with their steak for the ultimate surf and turf. With an entertainment space that honors both of their roots, Steve and Paula’s home in Edgecomb, like other parts of their life, is a balance, of North and South America, country and city, sea and shore.