Fate and Coincidence Brought these Actors to their Farmhouse in Maine 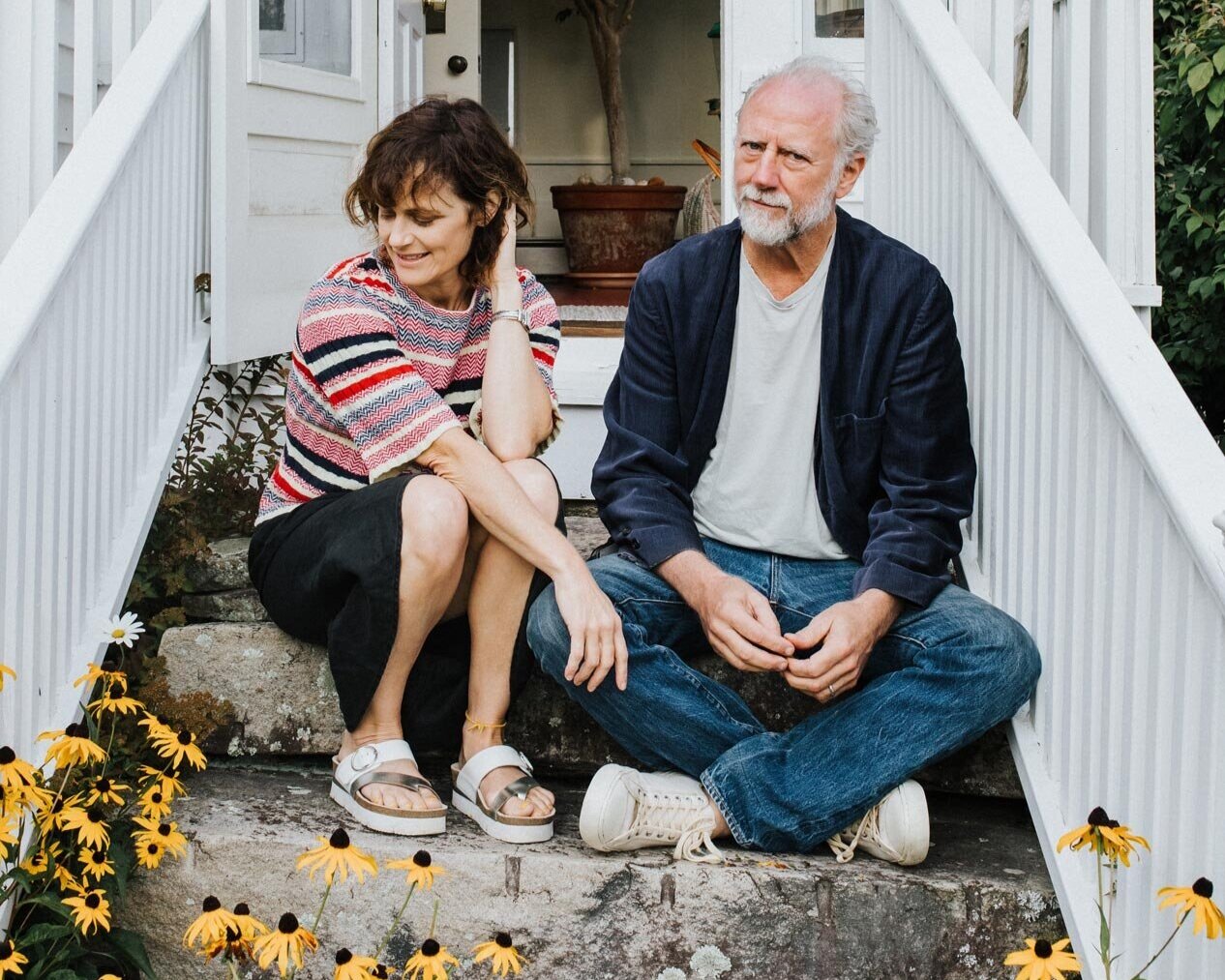 The partnership started when their eyes met in a dressing room mirror in the makeup trailer of the Fox Television show 24. He was playing George Mason, a big shot in counterterrorism, and she portrayed Nina Myers, a federal agent soon to be outed as a corrupt information broker. It was a merging of talents, not just for acting but also in painting, writing, producing, and, overall, a dedication to a creative life. Fifteen years, a slew of Hollywood credits, and two babies later, they decided that Los Angeles wasn’t the place to foster the bigger picture they envisioned for their lives—and they chose Maine.

Sarah Clarke and Xander Berkeley approached the state like many “from away-ers.”  They dipped their toes into its most popular seasons. But then chose the full-body splash-in and over-the-head immersion.

The question always posed is: Why Maine?

The starting point of most films is the screenplay, and in its special language, screenwriters call for close-ups, medium shots, and wide shots to help tell the story. The WIDE SHOT (that’s how you’d see it in a screenplay) sets time, place, and mood. So let’s start there: A small town in Cumberland County, not far from the banks of the Royal River. CAMERA moves down a country road hugging the coastline and reveals a cozy, rambling, centuries-old inn that, in years past, had welcomed political and entertainment luminaries and is now a single-family home. The property exudes Yankee ingenuity and an appetite for quiet community. MEDIUM SHOT: Children racing across a vast lawn to burst through the doors that once led to the inn’s reception area. Once inside, their movements introduce us to wide-planked floors from the 1700s. There are paintings on easels, half-completed sculptures, newly edited script pages on a desk, costume sketches, a fragrant soup on the massive gas range, and a long, welcoming dining table. The children grab their books, curl into reading chairs while their parents finish arranging the antique treasures found stuffed between joists (discovered when adding insulation) on the mantelpiece. The setting takes shape. And then the familiar question: “Why here? Why Maine?”

Sarah sinks into a comfy couch and we’re now in CLOSE-UP. “Romantic memories from our childhoods. Xander spent a couple years living on a communal farm as a child in New Jersey, and I had two aunts who lived on farms. We even got married on one of those farms.”

Xander, sitting under one of his large-scale paintings of a Maine farm-scape, picks up the story. “But our careers led us to living in the congested Hollywood Hills, and though LA was mostly agricultural until the late 1800s, there was no sense of ‘farm’ left in the area.”

“I was out of town working on a television show in 2012,” Sarah says. “And our oldest daughter—7 at the time—woke Xander up one morning and asked when we were moving to the farm so we could have animals and grow things.”

“FIFTEEN YEARS, A SLEW OF HOLLYWOOD CREDITS, AND TWO BABIES LATER, THEY DECIDED THAT LOS ANGELES WASN’T THE PLACE TO FOSTER THE BIGGER PICTURE THEY ENVISIONED FOR THEIR LIVES—AND THEY CHOSE MAINE.”

Xander picks up the backstory. “She sounded like it was a given, that it was just a matter of time before we would sell our California home to make it happen. I figured she was fresh out of a dream. I told her it was a ‘big’ idea, but I needed some coffee to think it over. Later the same day, a friend from childhood e-mailed me out of the blue and included a real estate listing of a farm in Maine with a subject line, ‘What are your thoughts on becoming a gentleman farmer?’ I called Sarah to ask if she’d talked to our daughter about our romantic notions, but Sarah said the last time she remembered us mentioning a farm was when she was pregnant. We couldn’t get the coincidence out of our heads, and when we visited my mother on the East Coast for Christmas, we checked out the property. We loved it; it even had a Berkeley stove from the 1800s, so it felt there was already a family name attached to it. Then I got an offer to do a movie shooting in Maine. Seemed like everything was pointing to here.” They bought the farm, thinking it would be a summer escape.

Sarah gets up to make tea. “But we found it harder and harder to leave each fall.” 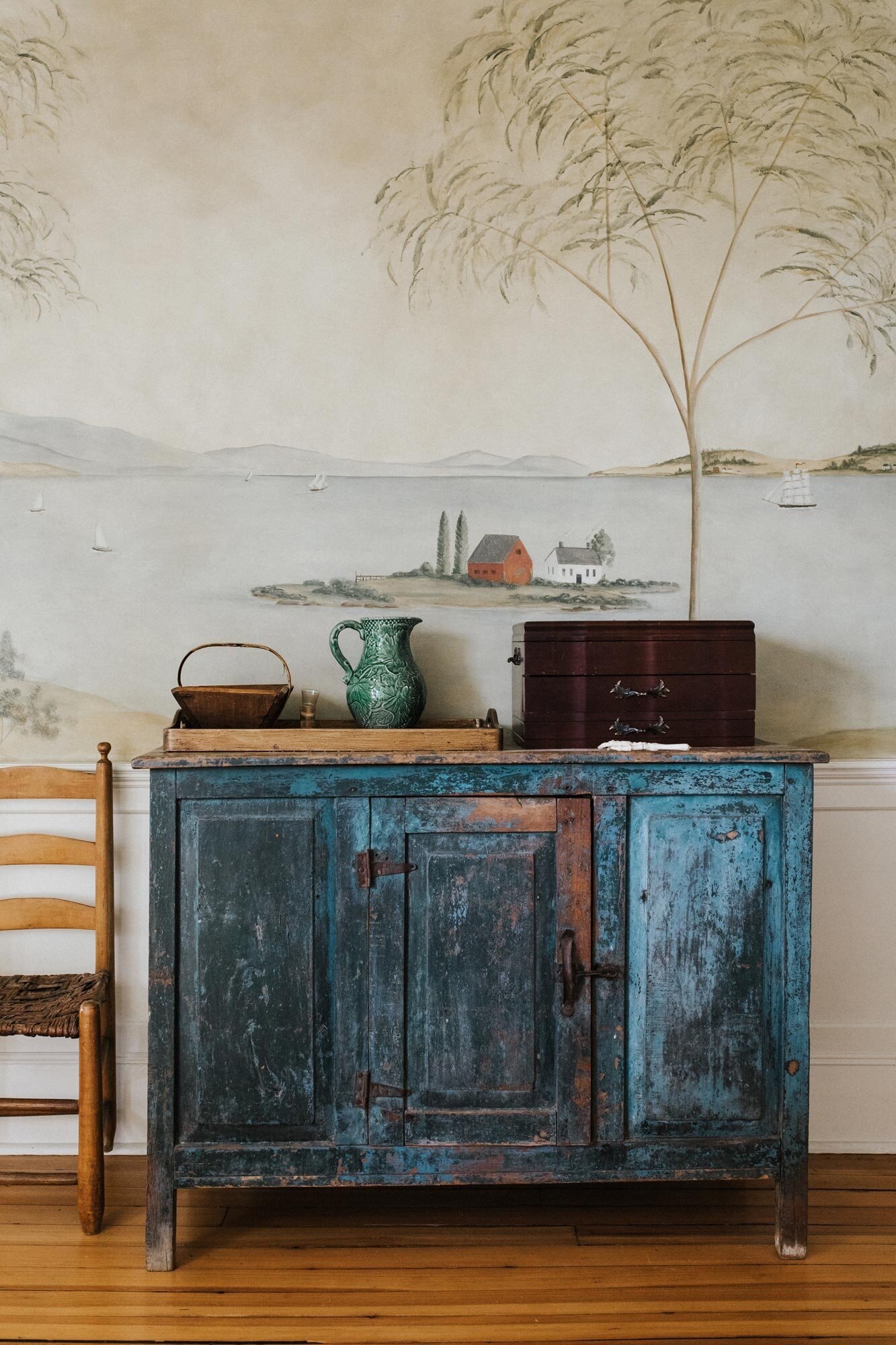 A primitive cabinet that the couple brought from California. 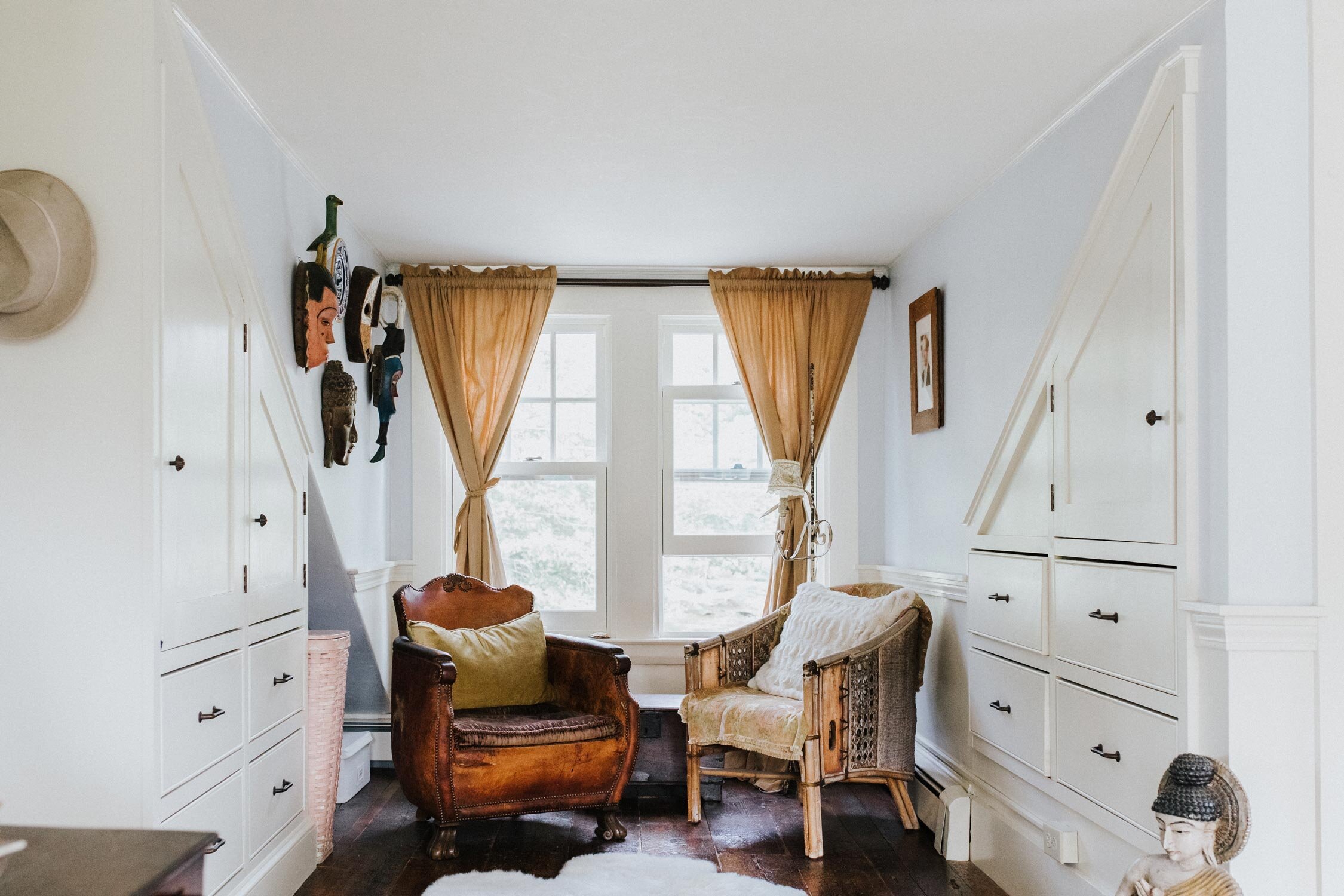 His and hers reading chairs in the owner’s bedroom suite. On either side, white built-in cabinets and drawers provide additional storage without taking up unnecessary space. 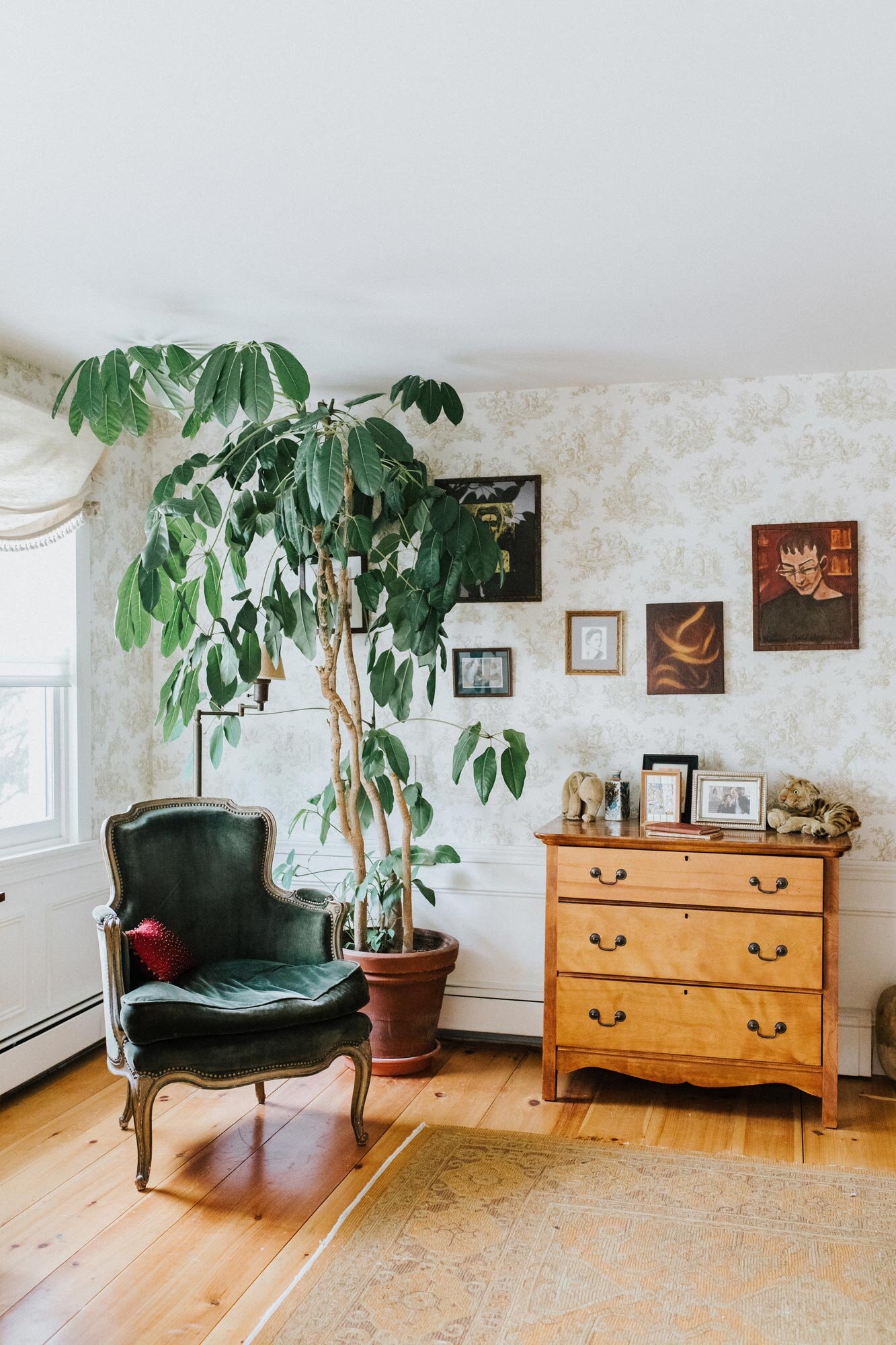 A California plant thrives in the guest bedroom alongside a green velvet chair and wooden dresser. 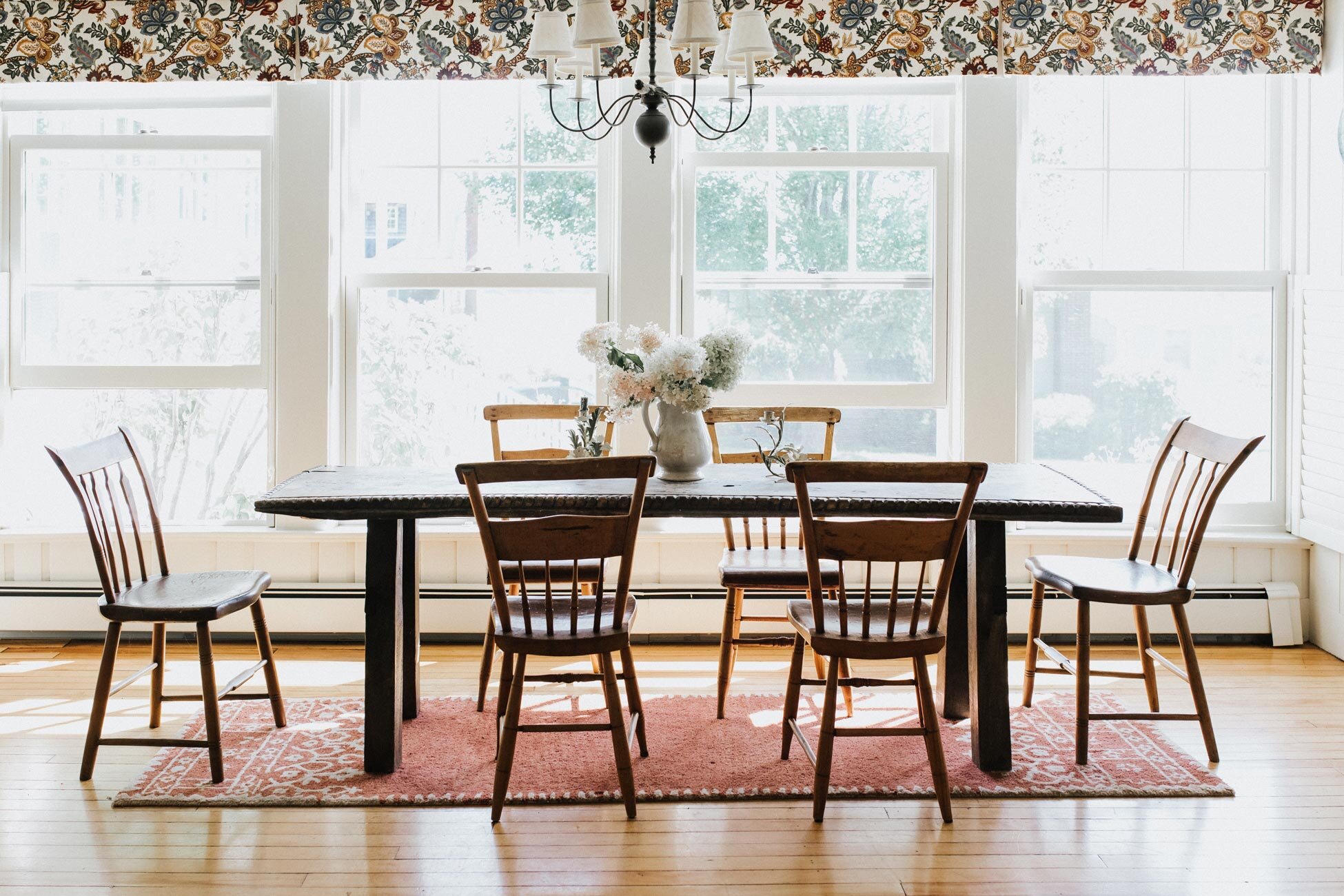 The dining area is open to the kitchen. 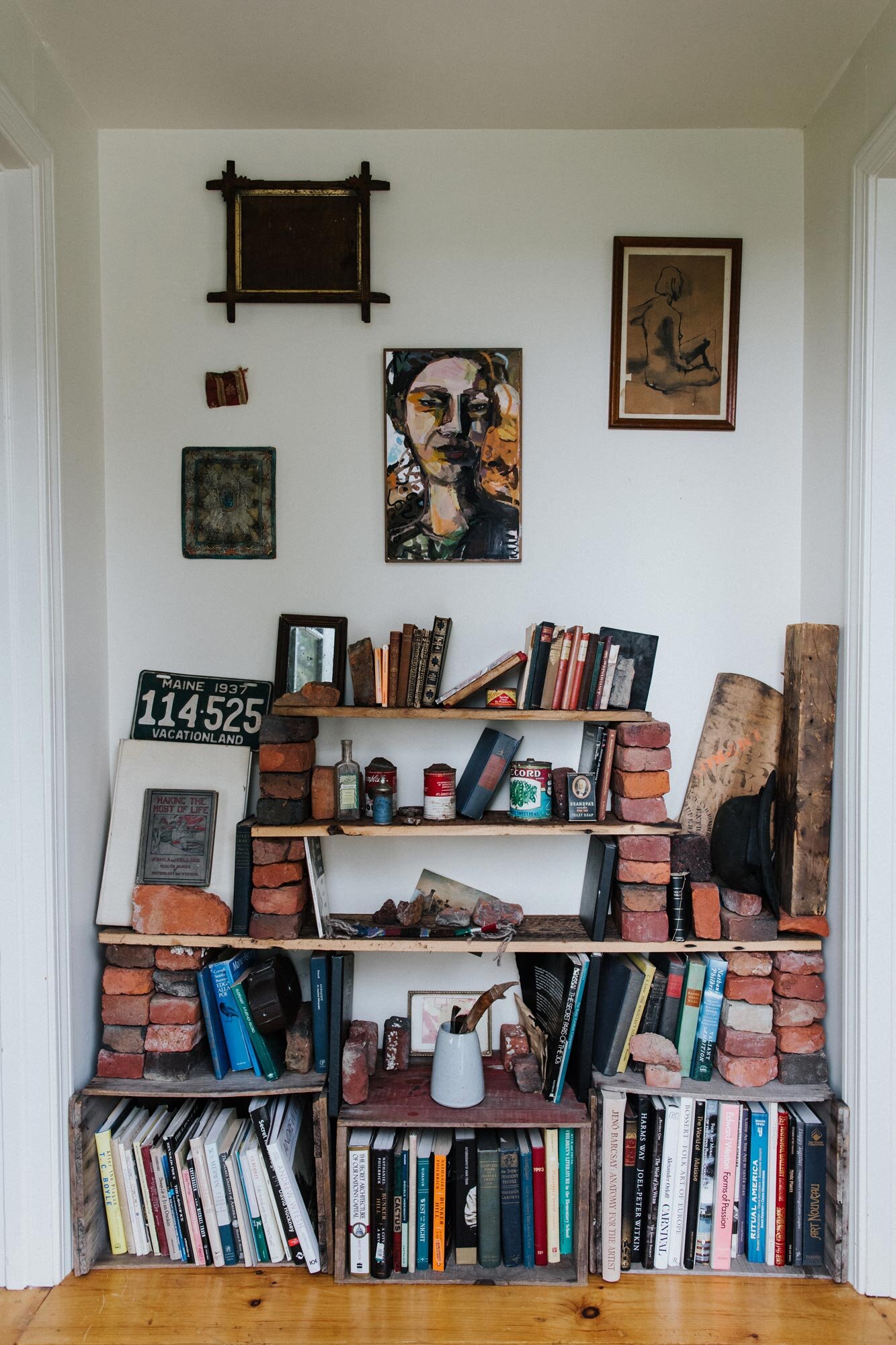 Many of the items on the brick and board shelves were found in the cubbies, closets, and in the walls of the house. 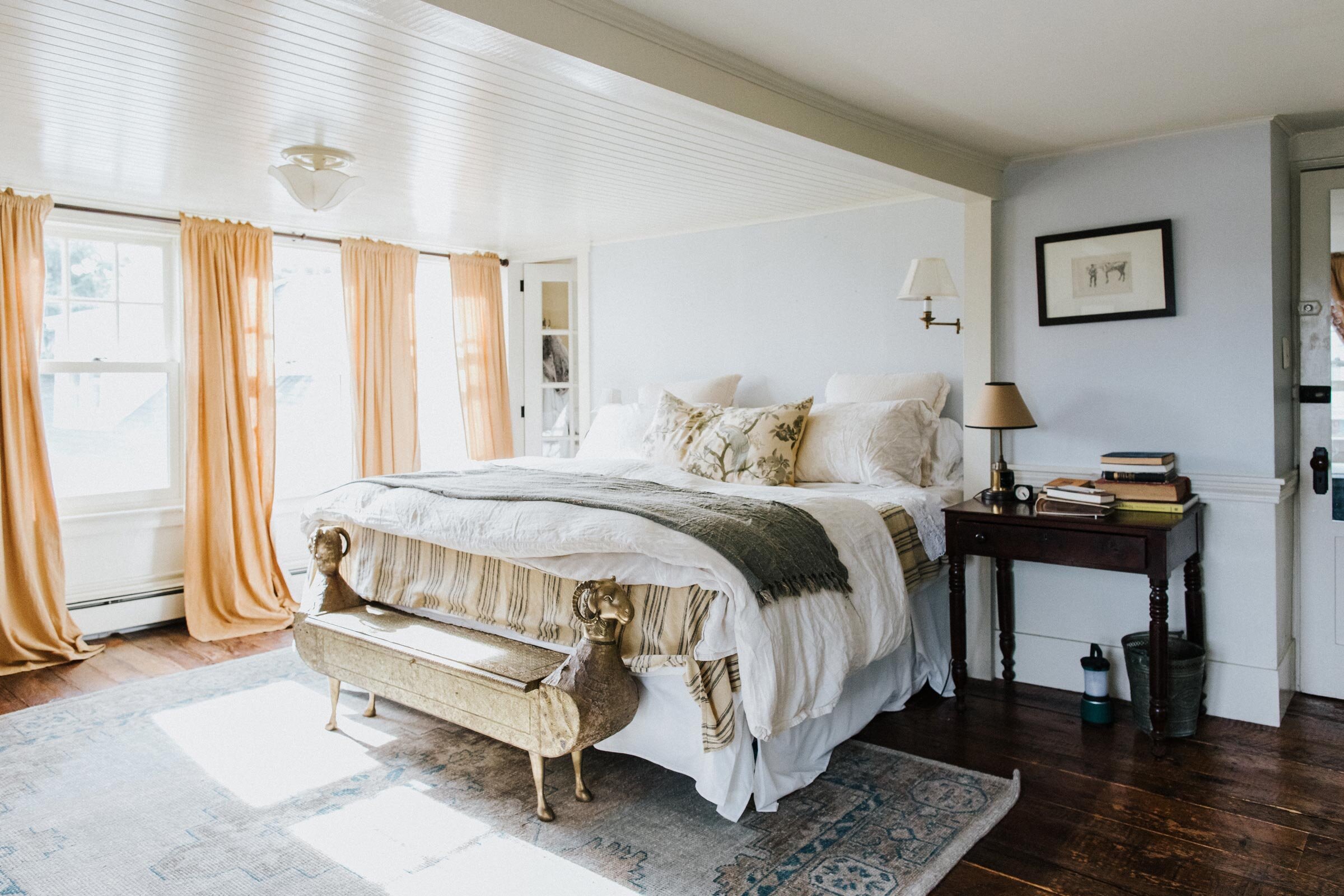 The couple’s light-filled bedroom has views out to the water. Wide-planked floors from the 1700s bring to mind the original purpose of their beloved home as a historic inn. 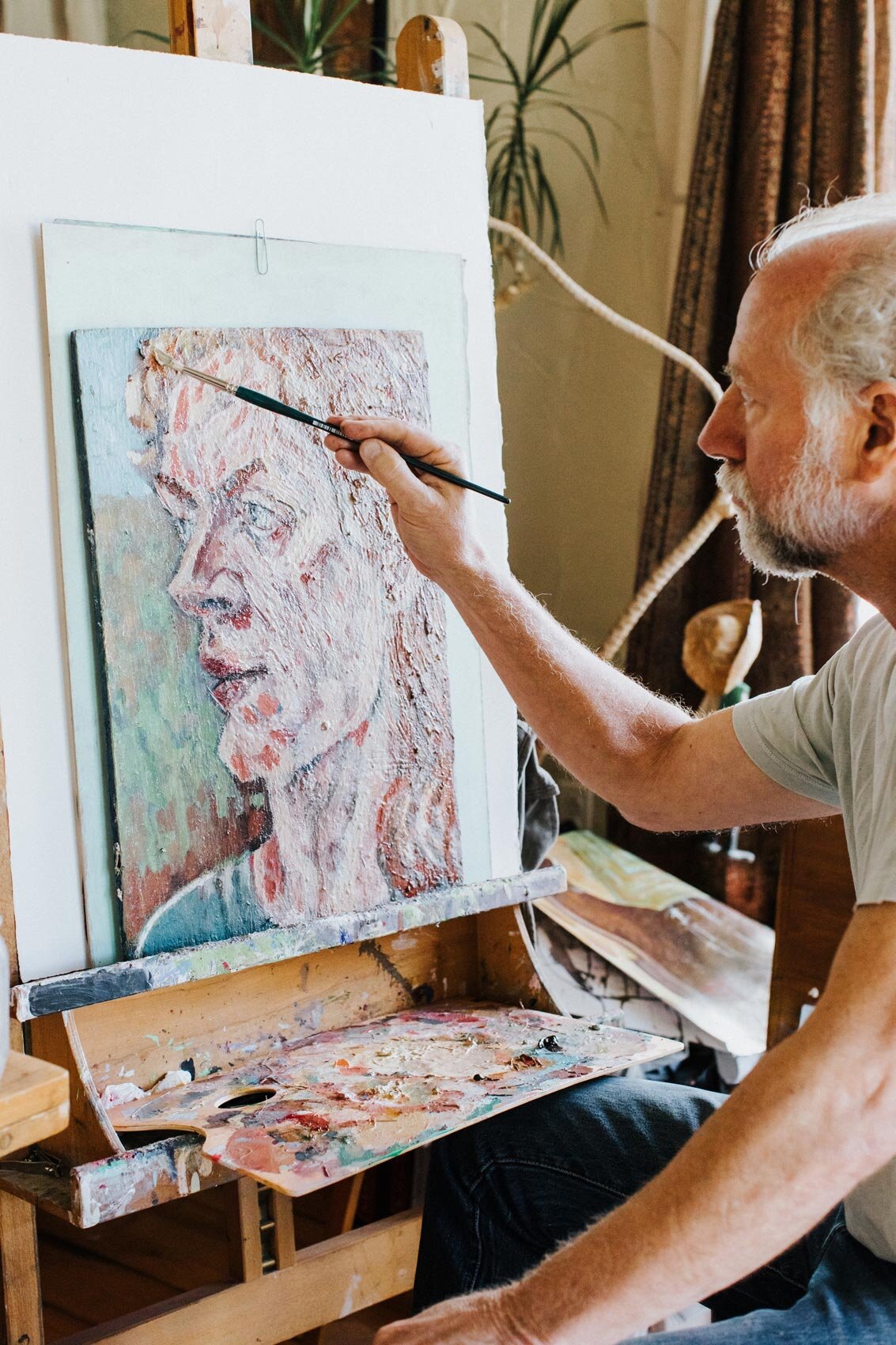 The idea of living in Maine full-time, building the “bigger picture” of their lives, took hold. They’d come to realize that Maine is crawling with talent—musicians, painters, filmmakers, writers, and more. That Mainers have an inspirational “let’s make it happen” attitude. A long-range goal—making the farm’s large barn into an oasis where artists could share their talents—began to take form, but living year-round in Maine took precedence.

Thus, in 2018, the renovated inn, close to Maine’s largest urban community, fit the new plan. Old trees. Good schools. An airport nearby when work calls. Close to groups they’ve become involved in like The Telling Room, SPACE Gallery, play readings, music festivals, and more. And, serendipitously, close to the locations of three of their latest films—all shot in Maine.

Sarah sips her tea. “Every morning, the first thing I happily notice is the sky and water. And the air.”

“Not only cleaner air, but deeper breaths,” Xander agrees.  “This is a place to create the bigger picture.” The CAMERA follows his gaze out the window, to Casco Bay.