Hunkering Down in Georgetown 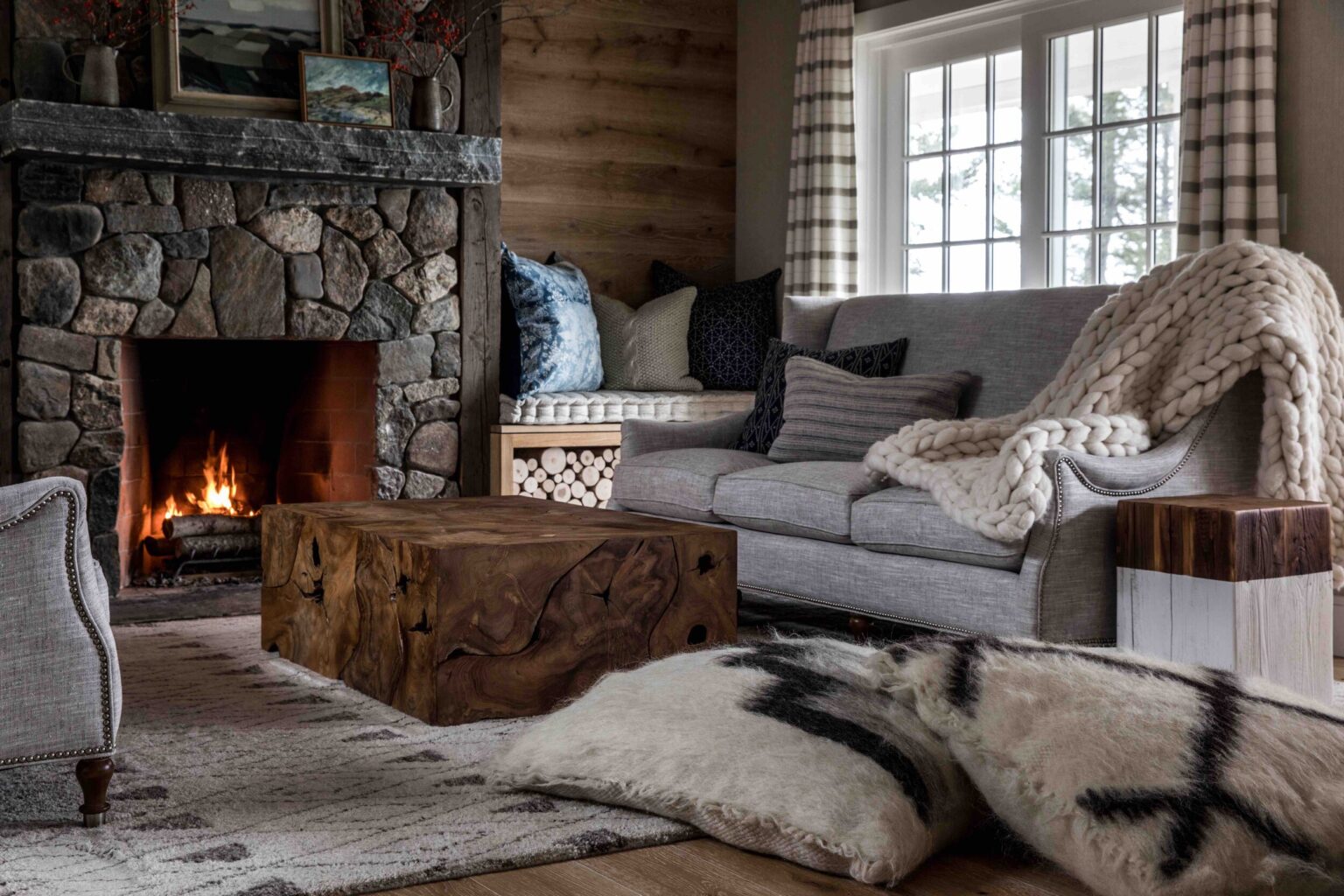 Come July, the throngs are drawn north for Maine’s crystalline waters, rocky beaches, and salt air—then pack their bags and drive back over the Piscataqua Bridge come Labor Day. But those who stay in winter know a different Maine: one that’s quieter, hushed; where Mother Nature—deep snow, silent pines, and a dark, cold sea—takes over and looms large outside the windows. In a Maine winter, the indoors becomes a place especially for hunkering down and riding out the season, a warm reward after venturing out into the cold.

Take this house in the wild woods in Georgetown. When the homeowners—Julie and Chris Ackerman, their teenage daughters, Sydney and Olivia, and Henry, their 9-year-old goldendoodle—first discovered the island, they were visitors, staying with friends. “They have a peaceful and beautiful home in Georgetown,” Julie says, “and we realized that we were spending way too much time in their guesthouse.” So the Ackermans found a place of their own nearby: a fairly newly built house that, they found out, stood on the same ground as Marycliff, a Greek Revival–style mansion built in 1912 that burned down in the nineties. “It’s listed as a landmark on nautical maps,” Julie points out. Mariners traveling the Sheepscot River were once guided by its lights.

The circa-2006 house that replaced it was somewhat less grand (“Even though it was not that old, the interior felt dated and out of place in Maine,” Julie recalls), but the setting was no less majestic. “It’s amazing to look out over the water and see the wildlife and lobster boats,” says Julie. “It’s obviously beautiful on clear, sunny days, but it is also breathtaking on gray, foggy, and snowy days.”

The Ackermans are based in Chicago, but they set about renovating the interiors—long distance—with the help of designer Nicola Manganello, of Nicola’s Home, and Maguire Construction, both in Yarmouth. And though they wanted a place to spend summer vacations on the island, their design focus also included creating a winter weekend escape. “We told them we wanted warm, inviting spaces with furniture that is comfortable,” says Julie. “We wanted lots of pillows and cozy blankets. They basically did the rest.”

The rest included some shifts to make the layout of the house work better for the family, who needed to work remotely as well as have guests up for holidays and getaways. “The designs for this house were puzzled together so this family could coexist comfortably,” says Nicola.

Woven pendant lights and barstools from Nicola’s Home add to what Nicola calls the “elegant, yet rustic look” of the interiors.
Wooden wallboard, Duralee window fabric, and a lounge chair from Nicola’s Home make this sitting area feel extra snug. A chunky throw blanket from Etsy compliments the cozy ambiance.
Plays with texture continue in the indoor/outdoor spaces, where sheepskins and lights by Artesia add warmth for dinners on the porch.
“In the home, color and texture welcome you,” says Nicola. Here, baskets huddle atop a detailed wooden sideboard.
Previous
Next

The main problem was the oddly arranged kitchen. “The original layout did not use the space well, nor did it take advantage of the amazing views,” remembers Julie. The team made two simple but major swaps: one, removing the soffit above the cabinets and stretching them to the ceiling, which “really opened up the space and allowed more movement and storage throughout the kitchen,” Nicola says, and two, swapping an in-the-way section of counter for a generous-sized island custom-made by Nicola’s Home, creating a sense of openness. The result was a transformed kitchen—all while cleverly reusing the original cabinets, which got a fresh coat of paint and new hardware.

Then it was on to the master bath, basement (“Completely unfinished,” Julie recalls), and the home office (“Just an open space,” she says). The finished lower level now features a dark, hangout-ready bar designed by Nicola and Maguire and built with distressed wood. And the light-filled office—fronted by metal-and-glass sliding doors—is now the family’s favorite room (and sure to get lots of use, particularly if the family is able to come to Maine in the midst of the pandemic). Elsewhere, the team added new floors and shiplap wallboard, a nod to the seaworthy cladding used to seal houses tight against the elements.

It’s in the living areas, though, where the design is particularly snug. Rough-hewn beams, newly added across the ceilings, add coziness, and sumptuous textures cover nearly every surface—from impossibly thick knit blankets and fur-fronted pillows laid on the floor to a stone mantel and wood-clad walls. “There is not a single piece of furniture in the house that is not incredibly comfortable,” Julie reports. Nicola and team swapped the bookcases beside the original stone fireplace for low, comfortable benches with logs stacked under them. “Chris travels a lot for business, and the idea for the logs came from the lobby of a hotel in Seattle that he often stays at,” notes Julie. “That is probably the only design element that we contributed!” Together with the hardy stone fireplace, the log stacks feel like an homage to the Maine forest outside.

A branch and light from Arteriors add unexpected texture, even in the bath.
Nicola and team designed a hardworking foyer for the family, with simple black hardware and a bench for changing shoes.
A bath is tiled in marble for a luxe feel.
“Our girls love the porch swing,” Julie says—set for winter with an area rug from Surya and boldly checked blanket from Brimfield Antique Flea Market.
Previous
Next

In fact, much of the house does. While the renovation made the house more usable for a family of four’s needs, the design also does something else: It “captures all of Maine’s outdoor natural beauty by bringing it inside,” Nicola says. “All of the stonework, wood, and natural materials were just some aspects we kept in mind when designing this home. It is so important to work with your surroundings.” Especially when creating a space to revel in the quiet and ferocity of winter in Maine.