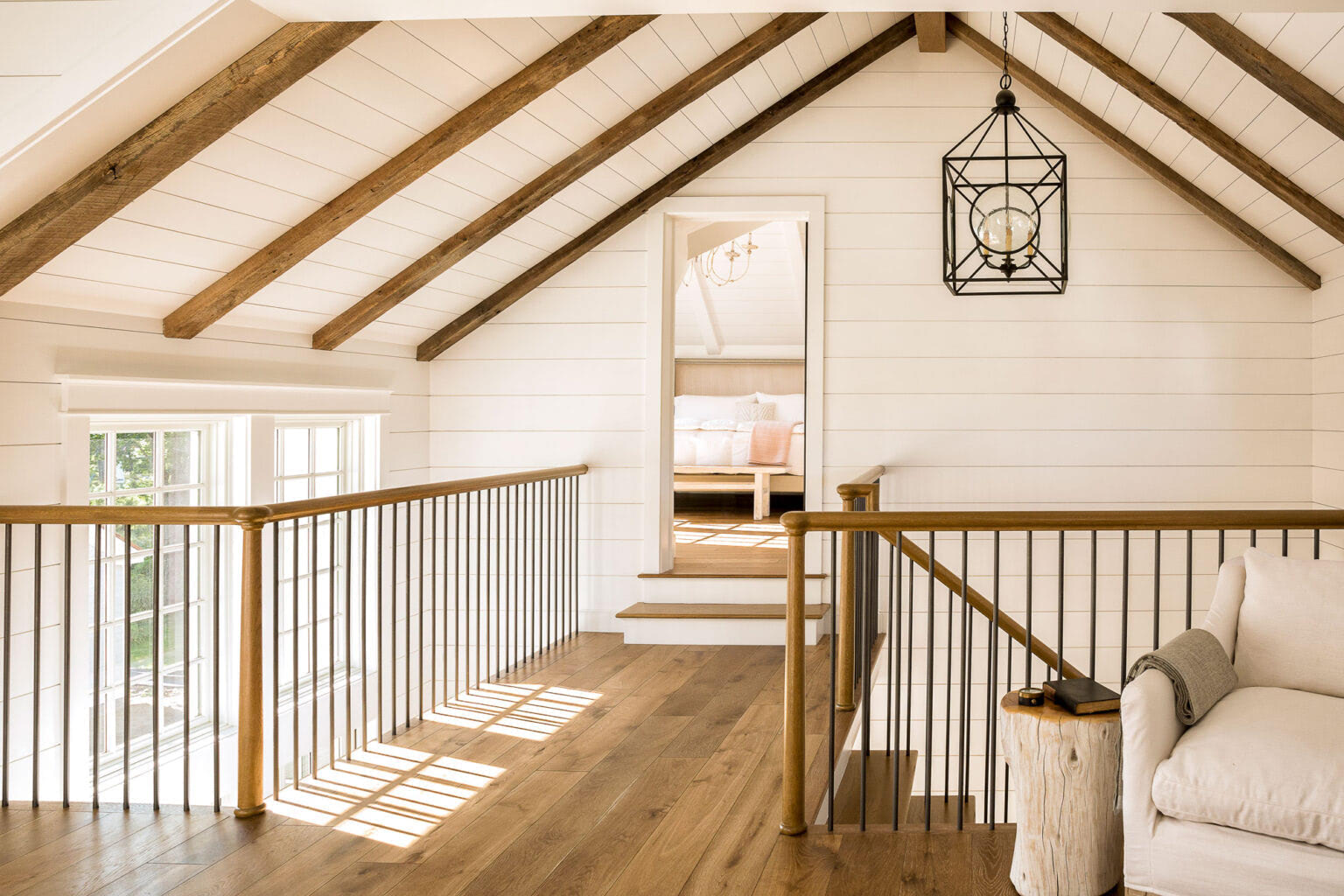 When one’s home base is a 100-acre farm north of Toronto—a place where, until recently, couples got married in the rolling fields and toasted their new life in the renovated barn—the Maine harbor town of Cape Porpoise, nine hours south, almost feels bustling in comparison.

“It’s a very private setting, with not a person in sight,” says Lesley (who asked that only her first name be used) of the Canadian farm she shares with her husband. But from their house in the center of Cape Porpoise village, where the couple spend summers, she notes,

“We can walk to everything: several restaurants, the grocery store, Langsford Lobster, and my favorite store, Farm + Table.”

Not that Cape Porpoise is a busy place by any means. You can count the shops and restaurants on two hands; follow the curve of Pier Road to its end, and there are a handful of favorite restaurants tucked beside the pier along with views of the harbor—the gently turning lobster boats and, farther out, Goat Island Light. Only a few minutes’ drive from the clamor of Kennebunkport, Cape Porpoise is still quiet. But building by building, it’s been shifting these last years from off-the-map lobstering village to a town made to walk around, with picturesque curb appeal and old-barns-turned-housewares-shops. And Lesley’s remodeled home, a stately Colonial that stands out amid the town’s coastal architecture, is smack at the heart of it.

But before they found their own place, the couple actually fell for the house next door—formerly The Captain’s Restaurant, across from the one-room town library. One summer, Lesley, stopping in the area en route to a family vacation in Nova Scotia, pulled up Realtor.com and saw the restaurant-turned-cottage, and the one behind it, for sale, both transformed into quaint holiday cottages by Kennebunk entrepreneur Tim Harrington, with immaculate finishings and seaside hues. A rainy drive-by later and Lesley was sold; the couple put in an offer and planned to set the cottages up as rental properties. “They were just so pretty,” Lesley says, “and the landscaping with the white picket fencing was the cherry on top.”

On the next lot over, set back slightly from Pier Road under tall trees, was the three-story Colonial, traditional and tall where the two cottages were petite and charming. “We asked our agent a few months after we took ownership of the Rose Cottage and the Captain’s Cottage who owned the old Colonial house,” Lesley explains. The house was built around 1800 for Samuel Grant, a ship captain and lighthouse keeper; as it turned out, the property was also owned by Harrington. The couple decided this could be their own place in Cape Porpoise, not for rent. And, Lesley says, “since the little cottages came completely furnished and beautifully decorated by Hurlbutt Designs, I was really looking forward to renovating this stately old home and making it my own.”

Rather than a coastal cottage aesthetic, Lesley envisioned getting rid of the dark interiors in favor of something different and more rustic. “I wanted more of a casual Swedish farmhouse feel inside,” she says. The house had already been redesigned by a local architect, and Harrington’s plan was to have local builders Thomas & Lord do the rest. “Instead, we made a deal that if we purchased it, we would be able to choose the interior and exterior finishings, as nothing had been started yet,” Lesley says.

So the couple worked with Thomas & Lord as well as Louise Hurlbutt of Hurlbutt Designs to majorly rework the old house’s structure—no small undertaking, especially since all of it was done with the homeowners at a distance. Among the impressive changes made to the bones of the place: a new kitchen and pantry, new bathrooms, and a new laundry space; new windows, doors, and shiplap cladding on the interior walls; a brand-new fieldstone fireplace (and a gas fireplace, too); not one but two new staircases; and the addition of reclaimed beams from an old factory to echo the original beams in the living room and dining room. The team deliberated over the original wide-plank pine flooring, which was charming but warped, and eventually settled on replacing it.

Lesley has always felt pulled toward design (“I started a drapery business making the oh-so-popular balloon curtains back in the eighties,” she says; the couple also have house projects underway in Longboat Key, Florida, Canada, and right down the road in Biddeford), and she worked closely with Louise Hurlbutt on the interiors. The finished rooms feel as if they’re part of a rambling country farmhouse, with exposed beams and black barn doors, an unlikely juxtaposition for this tall house in a small town.

A curved chandelier with delicate lines from Visual Comfort adds lightness to an airy upstairs bedroom.
In another bath, a double wall-mounted sink, dual hanging pendants, and graphic floor tiles are all in a high-contrast black-and-white palette.
A black-painted bed frame, purchased through Hurlbutt Designs, looks striking in an otherwise shades-of-white bedroom.
In another bedroom, twin beds are tucked under the eaves. White-painted molding and clean-lined furniture keep the small room feeling bright and open.
A farmhouse touch: Sliding barn doors, found through Thomas & Lord and painted in Onyx by Benjamin Moore, lead to a bath.
A vintage mirror leans casually in the dining area. Note also the original ceiling beams.
Previous
Next

Perhaps most striking about the interiors is the way the light slants through them. “My favorite is the master bedroom,” says Lesley. “I love waking up in the morning, opening the French doors off the bedroom, and looking out at the misty harbor.”

Any day-tripper to Cape Porpoise center can admire the redone exterior, with a manicured driveway, two levels of decks, and landscaping by Ted Carter. Remarkably, there was even enough space for a small pool for the couple’s five—soon to be seven—grandchildren.

It’s an almost uncannily ideal sliver of real estate for such a large family. There’s space to spread out, even in the thick of things; they can walk to the market or a lobster dinner or the town pier and still slow down to the quieter pace that takes over in Cape Porpoise. “I love the smell of the ocean close by and going for walks around the lively little village,” says Lesley. “My husband loves to walk over and just grab a coffee and a pastry across the street. He finds Cape Porpoise very relaxing.”