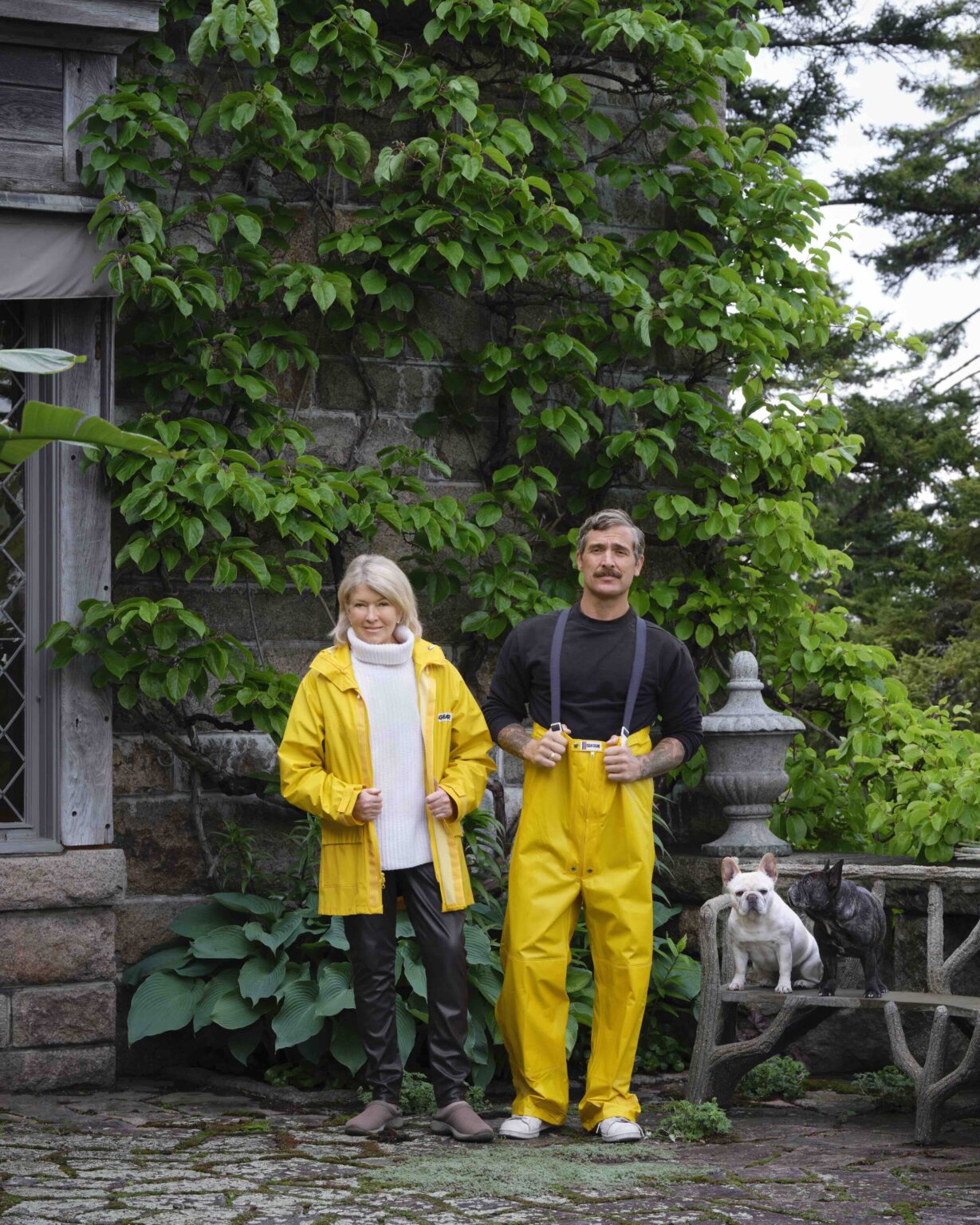 On Mount Desert Island, Martha Stewart’s elegant summer estate, Skylands, reigns supreme. Set near the crest of Ox Hill, with a massive facade hewn from the region’s renowned pink granite, it overlooks Seal Harbor with a sort of heavenly beneficence—the perfect perch for a domestic goddess.

Skylands was built as a summer cottage for Edsel Ford (then the president of Ford Motor Company) and his wife, Eleanor. The Fords enlisted Duncan Candler, star architect and toast of New York, for the job. With its primal beauty and vast, unspoiled wilderness of Acadia, Mount Desert Island first attracted “rusticators,” well-to-do urban families fleeing to rural idylls, then the country’s titans of industry followed suit. By the early 20th century, John D. Rockefeller Jr. and Edsel Ford were summer neighbors. In 1997, Martha purchased the grand Skylands and the adjacent shingle-sided Ox Ledge in 2015. 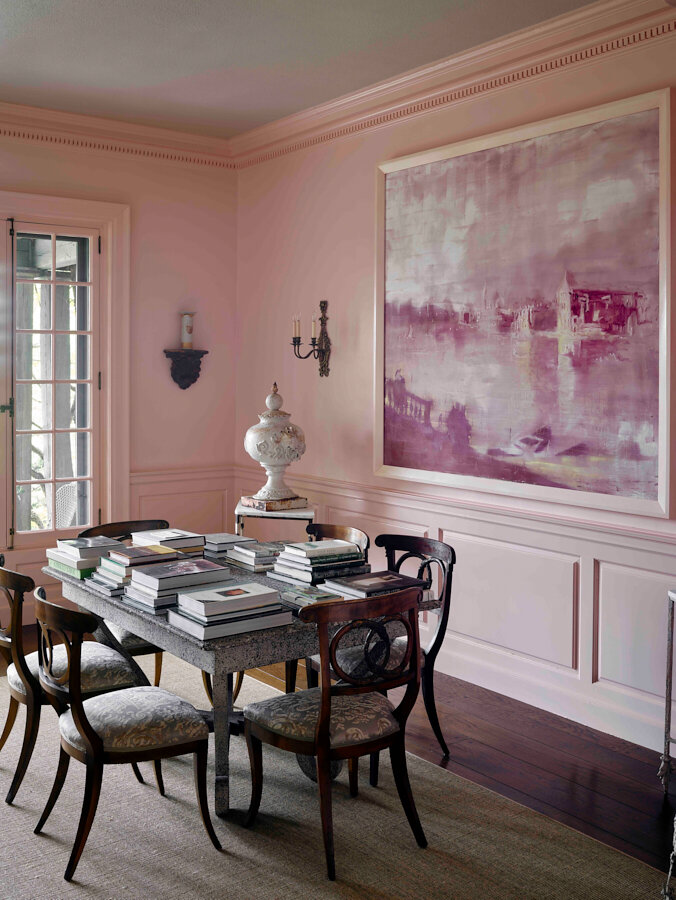 The blush pink dining room in the guest house. Painting by Kevin Burger. 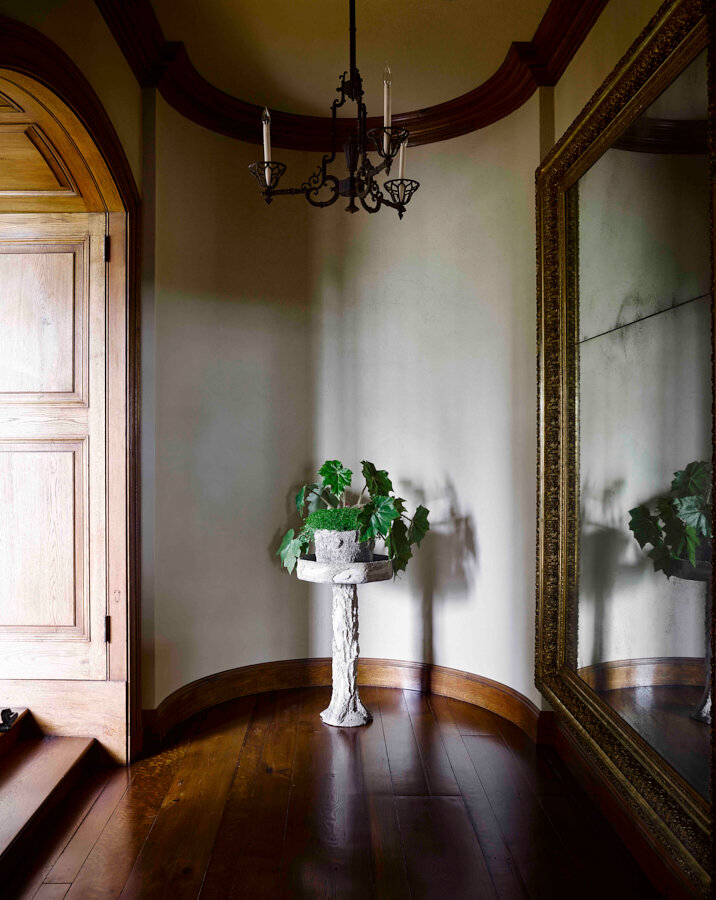 Beauty abounds around every corner.

“I bought Skylands because it was so unique, so well-made, and so beautifully designed, there wasn’t much to change,” says Martha. “And you don’t buy a house like that and then disregard the artistry that went into it. It’s really a story of the past and the people who built it and who took care of it. I consider myself the third caretaker of this property, and my daughter will be the fourth.”

Remarkably, the interim owners of the home sold it to her fully furnished, down to the exquisite cutwork table linens and silver, much of which dates to the Fords’ tenure. Her late friend, art dealer Allan Stone, praised her good fortune. “Allan kept saying to me all the time, ‘Martha, you got the best purchase, besides the Louisiana Purchase.’ Her banker had another reaction, she shares, with a laugh. “She said, ‘Martha, people go to Maine and go to L.L. Bean and buy a pair of boots. What the heck are you buying a house for?’ But it was buying a legacy of a family home, a vacation place that is not commonplace; it’s a very uncommon place. I consider it my piece of art, a major piece, and yet, for the price that I paid, I could have bought one good painting. One! But I got a world, a world that everyone enjoys.” 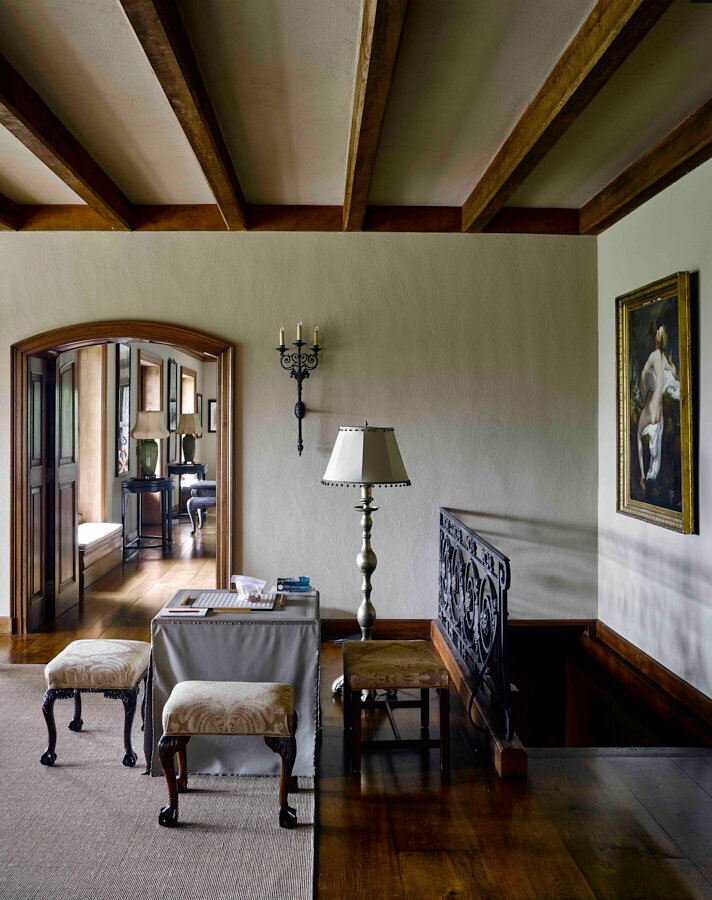 A leather skirt designed by Martha graces the game table. 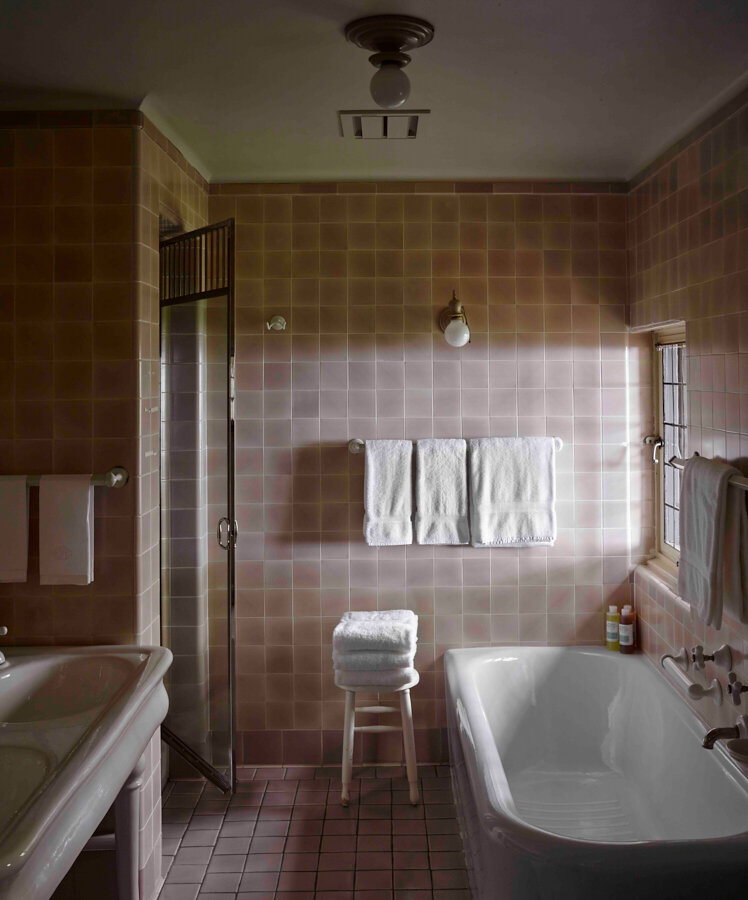 All of Skylands’ bathrooms feature original fixtures and Pewabic tiles.

At the home’s entrance, the “cracked ice” granite terrace extends into the great hall, where guests are welcomed by a dramatic arrangement of flowers and a leather-skirted table set for a game of Scrabble— a mix of glamour and playfulness that feels quintessentially Martha. Respectful of Skylands’ aesthetic, Martha added personalized touches that imbue a classic yet contemporary mien, painting the interior with custom colors from Fine Paints of Europe, reupholstering most of the furniture, and adding silk lamp shades lined in gold fabric to reflect the light. Crucially, she removed white wall-to-wall carpet, put down sisal rugs, and dispensed with the drapes, which she dislikes in general, to showcase the leaded windows.

Sunlight filters through their diamond pattern with a softness that gives the austere rooms a certain poetry, and it is easy to imagine the soirees held by the Fords nearly a hundred years ago. The muted colorway of gold, gray, and creamy ivory enhances the effect, lending Skylands’ oak-paneled rooms the sepia-tone glow of an antique photograph.

Photographer Douglas Friedman, a friend and frequent summer guest, notes, “It’s very peaceful. It’s not vibrant; it’s not explosive. Everything there is very subtle. I think it allows you to experience what’s outside as well. It’s definitely not calling too much attention to itself.” But for all its honeyed tones, the home is not suspended in amber. It is a lively, bustling place.

Douglas describes a typical visit. “Six in the morning, the intercom goes off, you know: ‘Wake up, everybody, we’re going hiking!’ and so you go down and Martha’s pulling the most incredible espressos out of the espresso machine. She’s whipping up brioche French toast. And then all of a sudden, we’re in the 12-passenger cab van and Martha’s driving us to some mountain to climb.”

In the 60-foot-long living hall, a place for relaxation and entertaining, a faux-bois concrete pedestal dining table (part of Martha’s extensive collection) adds a rustic touch to the elegant room. This balance of rusticity and refinement is measured both within and without, even in the gardens, where Martha indulges her passion for both delicate dahlias and hearty agaves. On the east terrace, enormous troughs of succulents nestle in the region’s pink gravel. “It looks like the South of France,” she says.

In the main home’s 12 bedrooms, antique four-poster canopy beds are sumptuously appointed with Bellora and SFERRA linens, while the 11 bathrooms retain their original Detroit Pewabic tiles and nickel finishings.

Her sensibility is particularly felt in the kitchen, from which so much of her creative acumen springs. While the Fords employed a chef and took their meals in the formal dining room, Martha loves to cook and renovated the kitchen with that in mind. It now includes a tall worktable that seats 18, surrounded by stools of various heights to accommodate guests of every stature. Family and friends often gather there while Martha cooks and serves informal meals, a habit that would surely have appalled the Fords, Martha notes with amusement. Surprisingly, the enormous original Frigidaires of their era are still humming.

Douglas recalls arriving with Martha for a visit to find a 90-pound halibut in the kitchen, a gift of a local fisherman. He describes how, without missing a beat, she dropped her bags, rolled up her sleeves and began filleting the enormous specimen.

“It’s really interesting, Skylands,” muses Douglas. “It was built as a very grand home that was run by a staff. There’s a warren, a maze of rooms, in the basement of Skylands, it’s so incredible what’s going on, just on the underside of it. But when you’re there, it’s not populated by a massive amount of people caring for things. It’s Martha and a couple of women that had been there for a few years. We make breakfast, we do the dishes, we take the laundry down. It’s that type of place. It’s a home.” 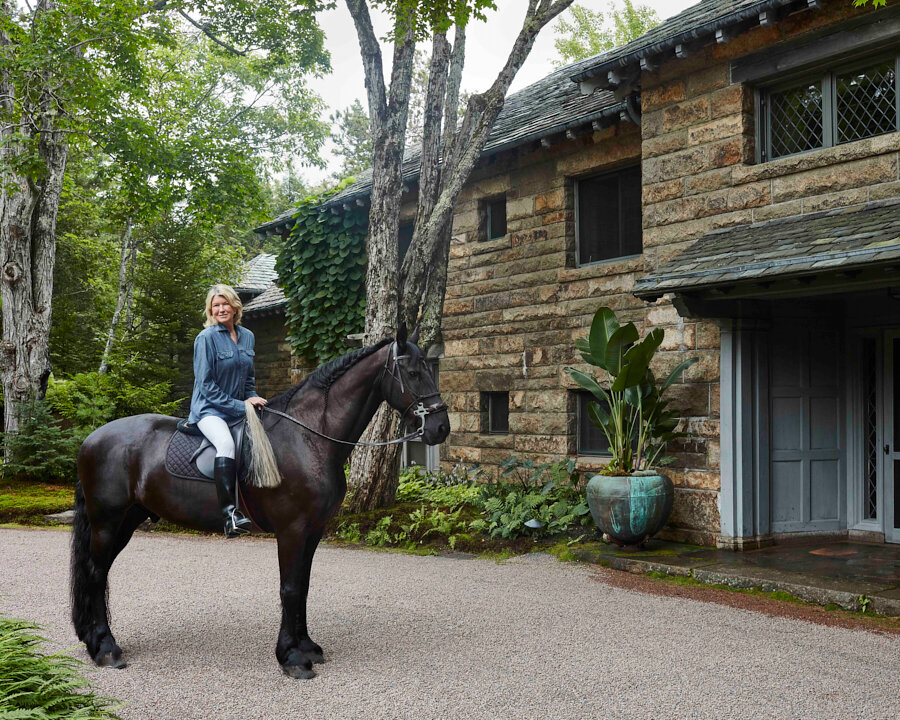 Martha and Ritze, one of her prized Friesian horses. 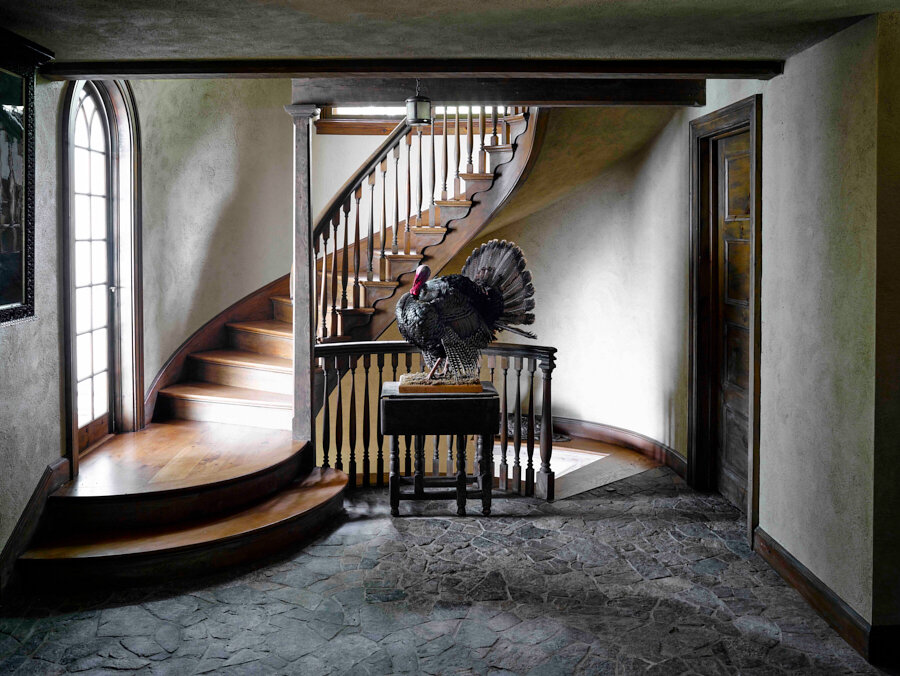 The sinuous playhouse stairway leading to the squash court.

The estate’s many traditions continue. Martha explains how the pink gravel drive is taken up every fall and respread in spring after snowmelt, and the property’s footpaths are lined with golden pine needles gathered and dried for that purpose. The obvious pride and pleasure Martha takes in her stewardship (Stewartship?) is evident in every aspect of Skylands’ meticulous maintenance. And while she has intrinsically made it her own, the Fords’ influence can still be felt in myriad details, from the cutwork table linens, Baccarat crystal, and orange Fitzhugh china marked “S” for Skylands (“Now Stewart,” Martha notes impishly) to the home’s many furnishings. Perhaps most especially in Edsel’s telescope, which still stands in the living room, ever ready to offer a close-up view of the sailboat-dotted harbor where the sea and sky meet on the horizon in one fine blue line.