Of Stone and Savannas 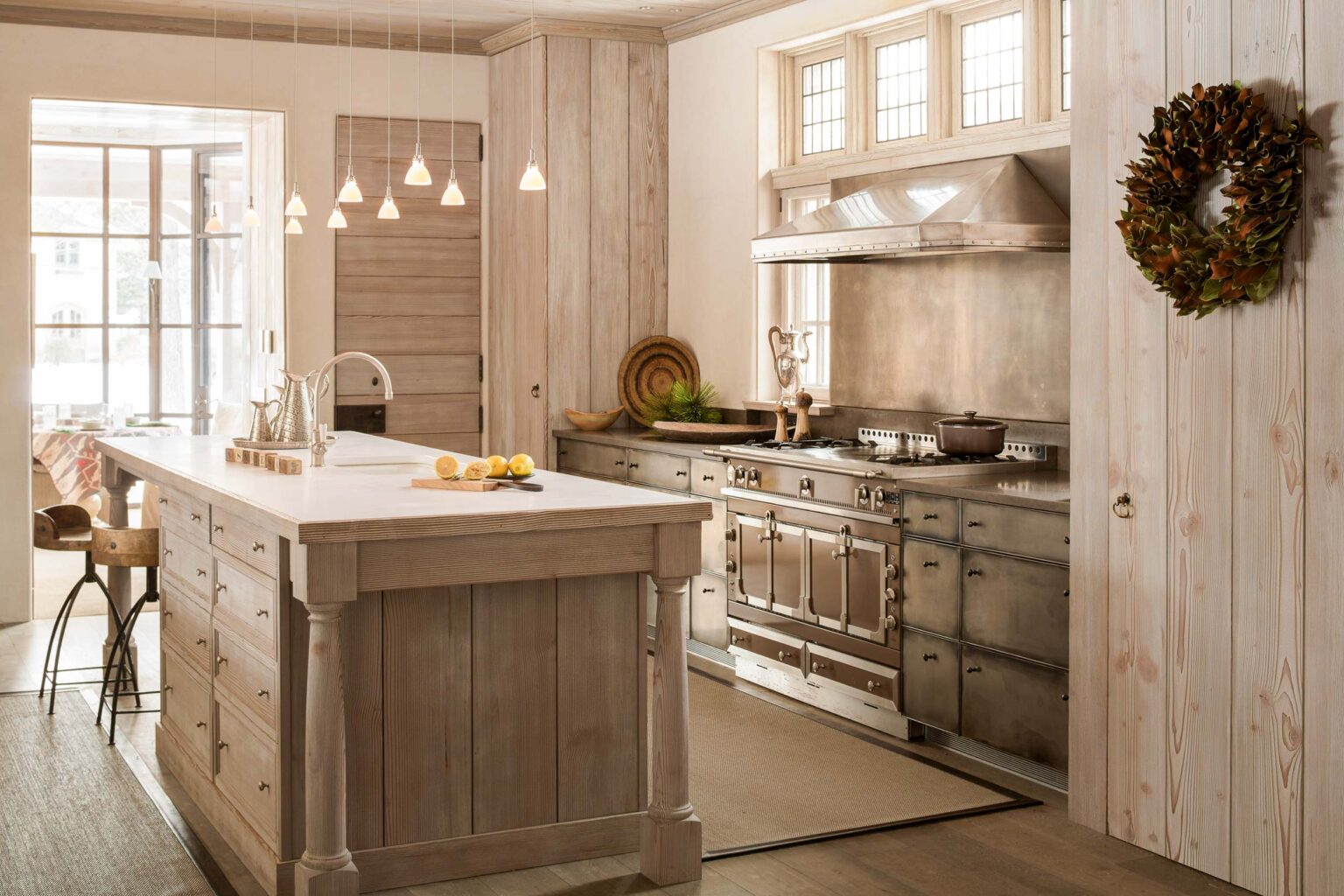 Most of the materials used in the home of Jennifer King and Tim Fredel are custom, even proprietary. “You aren’t buying this stuff off the shelf,” says lead builder Geoff Bowley. “The kitchen cabinets are a great example. Each one was hand rubbed to exact specifications.”

This place shouldn’t exist. It cannot be real. But it does—it is. In the Goose Rocks Beach neighborhood of Kennebunkport, Jennifer King and Tim Fredel—a pair of serial entrepreneurs and philanthropists, most currently of Kudos Trading Co., The Retreat: SF, and the Rugged Elegance Foundation—have created an enigmatic destination, a home that lives in a dream space, knocked loose from orienting time. Raw nature conjoins with domestication. Rock and smoke and steel and earth commingle. We are somewhere elemental.

Rising from a spread of broad fieldstones (placed by landscape architect Todd Richardson of Saco, a recipient of a Merit Award from the Boston Society of Landscape Architects), the villa suggests not so much a part-time summer retreat butted against a marsh on six acres in the Maine woods but a tectonic phenomenon, something awesome pushed up from the depths.

The effect intensifies the longer you stay. Soon, anything reliably “present” slips off, subsumed by more primordial forces. In the master bath rests a Papillon tub by Stone Forest, weighing beyond a ton and carved from a single piece of silver travertine. One imagines the palliative warmth of a mineral spring, the sweet punch of sulfur. Outside, a hot tub and cold plunge, a pebbled stream and waterfall—formed and concealed in crags of Heritage Valley stone, pulled from a quarry in Washington, and cut by David Eaton of Maine Stone and Landscape in Rockport—mimic tidal pools one could believe gently hissing steam in some remote volcanic foothills. And obviously the Will Winkelman-designed staircase out in the barn (make that: barn/film screening room/yoga studio). The jaw-dropping piece spirals to an elevated loft where little ones, Jennifer says, “lie on their tummies for movies.” The handcrafted modern piece was blunt-carved with chainsaws and is impossible not to describe as spinal. But in this intoxicating, temporally altered plane, one has to ask: The spine of what? What massive and long-extinct creature?

The nuance and texture of this chimeric world force many of these questions. The most recurrent: How is this mirage so real? Like even the slenderest of illusions—a coin vanish, say—the perfection of this numinous home demanded immense effort, dedication, patience, imaginative force, obsession.

“We broke ground in the blizzard of December 2010,” Jennifer says. From there, “Almost 200 people from over a hundred different trades, subcontractors, and suppliers worked on the project.” A crack squad helps—especially one led by John Saladino, who brought with him lead interior designer Ivan Chatman and lead architectural designer Stephen Barlow. From New York, the Saladino design team paired with an incredible local crew of architects, builders, artisans, and craftspeople to complete a design-build in just under two years. On the ground in Maine was lead builder Geoff Bowley of Bowley Builders in Kennebunk, whose father, Steve, built Jennifer’s parents’ home on the same plot in 1994. The King family has been on the land since the Great Fires of 1947 destroyed Jennifer’s grandparents’ original cottage and consumed much of Kennebunkport, after which they purchased the modest swath of (now burned clear) pine forest behind their former home, the land on which Jennifer and Tim’s home now presides, together with Jennifer’s siblings’ and parents’ homes.

“A lot of the design elements were evolving as we were building the home,” Bowley remembers. He speaks of the house as if it were coming alive. “Plus, we worked with largely custom materials and processes.” Reclaimed Douglas Fir panels on the ceiling and wall coverings required a seven-step treatment that involved blasting the boards with BBs to skip off the surface of the wood. Each stainless steel kitchen cabinet was rubbed individually to achieve its oily patina. Three different plasters came from multiple regions of Italy; stair railings arrived from Ecuador, artwork from Africa. “Everything here—lots of hands touched.”

Not all was so cosmopolitan. And intentionally so! Painstaking efforts have been made to ensure that “this is a barefoot home,” as Jennifer puts it. Having traveled back frequently from San Francisco, and having held weekly calls with the team during construction, Jennifer recalls a discussion between Saladino and a hired mason, a disparity regarding the shade of a particular grout. “Get a coffee can,” Saladino said, “add rusty nails and beer to the grounds. Mix it up. That’s the color.”

It’s the same brand of magic at work throughout the home—organic, unexpected, tactile, and mystical at once. What’s strange is that, unlike a palmed silver dollar, the effect remains potent even after the method is revealed. “With anything custom,” Bowley says, “you’re striving for something exceedingly unique, to achieve a look that has never existed before.” Check. And check.

Financing helps, too, of course. And Jennifer is well aware. “We were very, very, very blessed,” she says, “to be at the right place at the right time to give us the resources to build this place.” She and Tim invested early in Baidu, a massive Chinese internet firm, a tie that perhaps augments their wish for a home far removed from the “fast-paced, nonstop life” tech has wrought. “The cost of this house will never match the value of this house,” Jennifer says, “and if I’m prideful, it’s only because of the extended family and friends willing to travel thousands of miles to come to this magical place.” Since its completion in May 2012, the home has hosted many guests via its rental offerings on Airbnb, VRBO, and TheRetreat-ME.com. With each stay, a portion of the fee is donated to local and international nonprofits like Last Mile Health, Share Our Strength’s No Kid Hungry, and the Barbara Bush Literacy Foundation. It’s easy to believe these visitors come to enjoy the atavistic quiet, to bathe in hidden pools amid the wildlife, the arcane forest. It’s a chance to let one’s mind reach back—even briefly—to a hazy, impossible time when absolutely nothing beeped.