Raising the Roof in Freeport

A family’s soaring entertainment barn in Freeport has the heart of an old New England barn—and all the modern amenities
Words By Annie P. Quigley
Photos By Michael D. Wilson 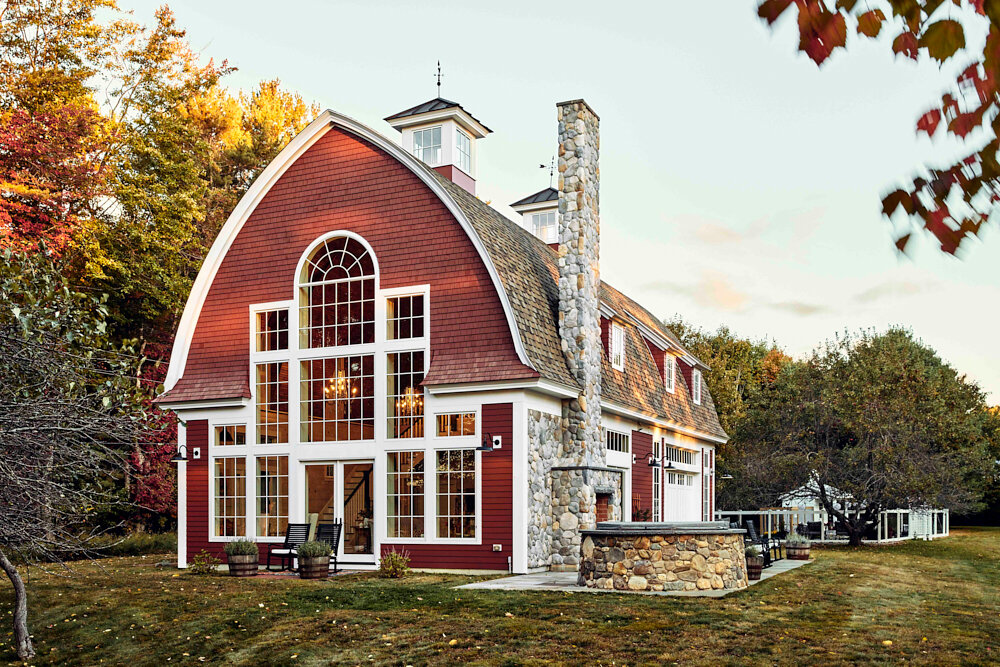 The wish list that the Lighter family had for their dream “entertainment barn” was 11 items long: “kitchen; big wood-burning stone fireplace (both indoor and outdoor); an outdoor patio/hot tub with views out to Casco Bay; a custom bar; a pool table and air hockey table; a big-screen TV for games and movies; a workout space; a reading/chill area; a full bath with large walk-in shower; and a two-car garage tall enough for a lift in case they wanted to add two more,” recalls Matt Wogan of Wogan Bros., the Freeport-based builder who took on the task.

Now that the project started in 2016 is done and built, though, the showstopper, as it turns out, isn’t the home gym or the cottage-y kitchen, but high above it: the soaring wood ceiling, 30 feet tall. This is not, in other words, your average family rec space.

The idea for the space started with the stand of apple trees on the property in Freeport that Jay and Nancy Lighter and their three grown children and ever-expanding flock of grandchildren use as a family retreat. “The apples bring deer and turkey with a variety of other cute critters all day and into the evening. It’s really magical,” says Nancy. One holiday season, though, they realized they needed more room to spread out. “I felt a calling for something beautiful, with great large windows to view all those things we love, all year-round. So, Matt and I walked over to the apple orchard area and staked out what would be the barn, nestled in between all my beloved apple trees. The space needed to be big enough to entertain our current and growing family,” she adds. “We love to be together, but we all need space, and that became very clear in the winter months when we are inside most of the time.”

But while the wish list for the barn was entirely modern (no doubt the barns of yore were not fitted with air hockey tables), its bones are straight out of heritage New England. “Inspiration came from a barn I pass almost every day in Brunswick: Granite Dairy Farm along Pleasant Hill off of Casco Road,” says Matt. “Once Jay and Nancy saw that barreled roofline, they were sold.”

Matt and the Lighters enlisted Joe Waltman of Waltman Architectural Design in Yarmouth to envision what was possible with the design. “We were tasked with designing a barn on a grand scale, yet intimate and comfortable for all seasons,” says Matt. 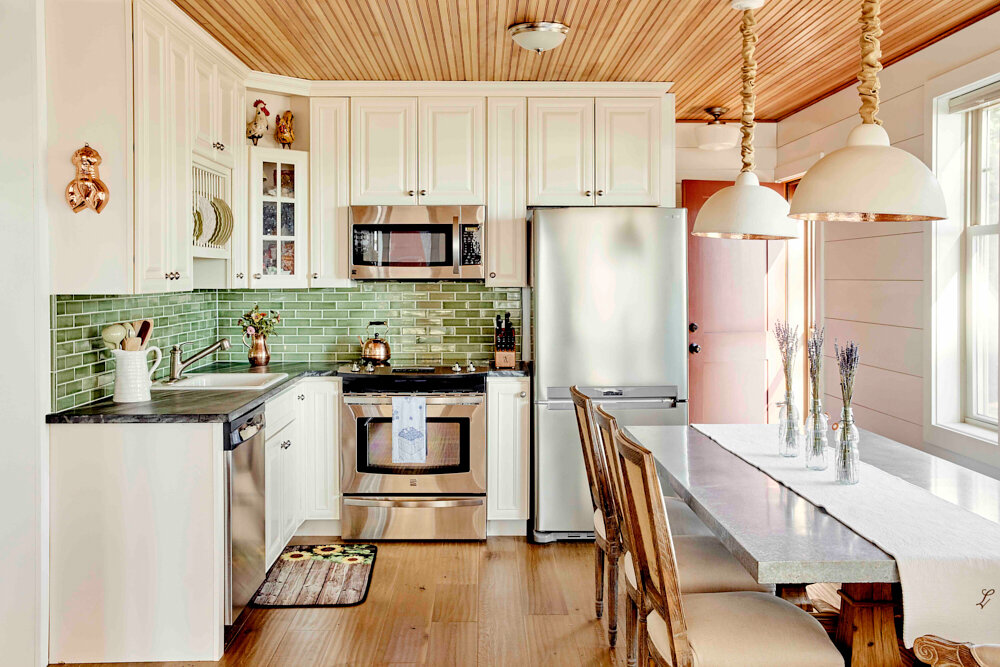 A glimpse at the green-and-cream kitchen in the carriage house, the family’s main living space, also by Matt. 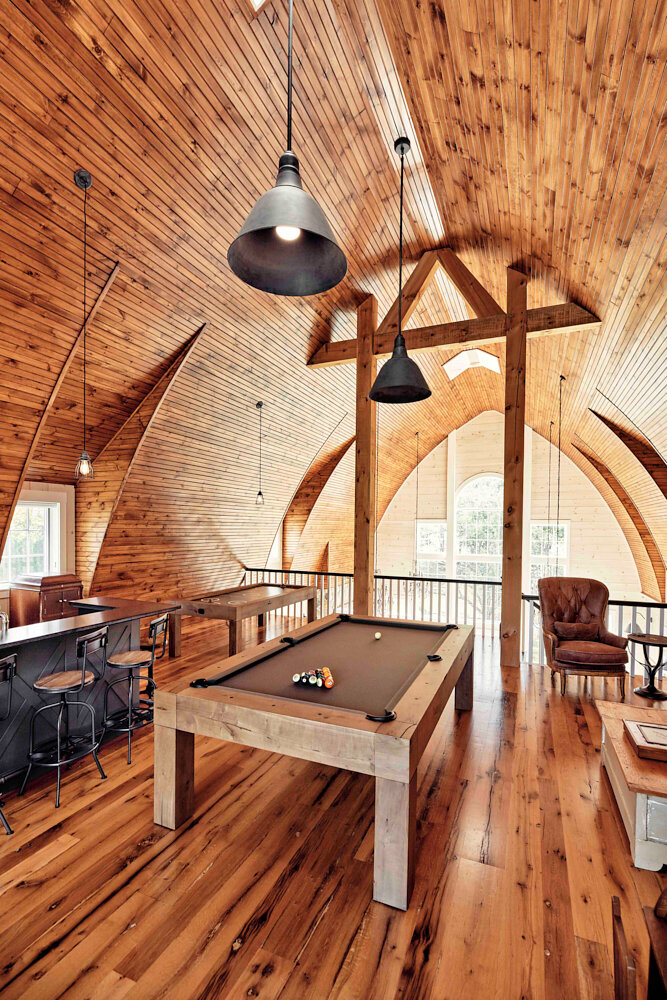 A peek at the elegant supports holding up the impossibly high ceiling. 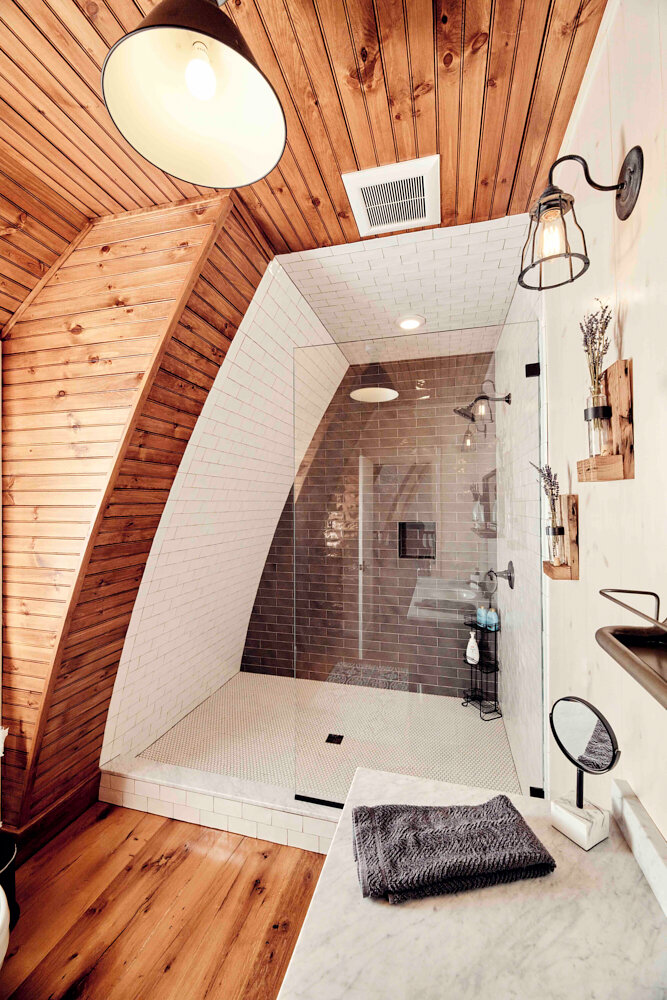 A spacious shower is built directly into the curved wall. Tile by Distinctive Tile Design and Stonework. 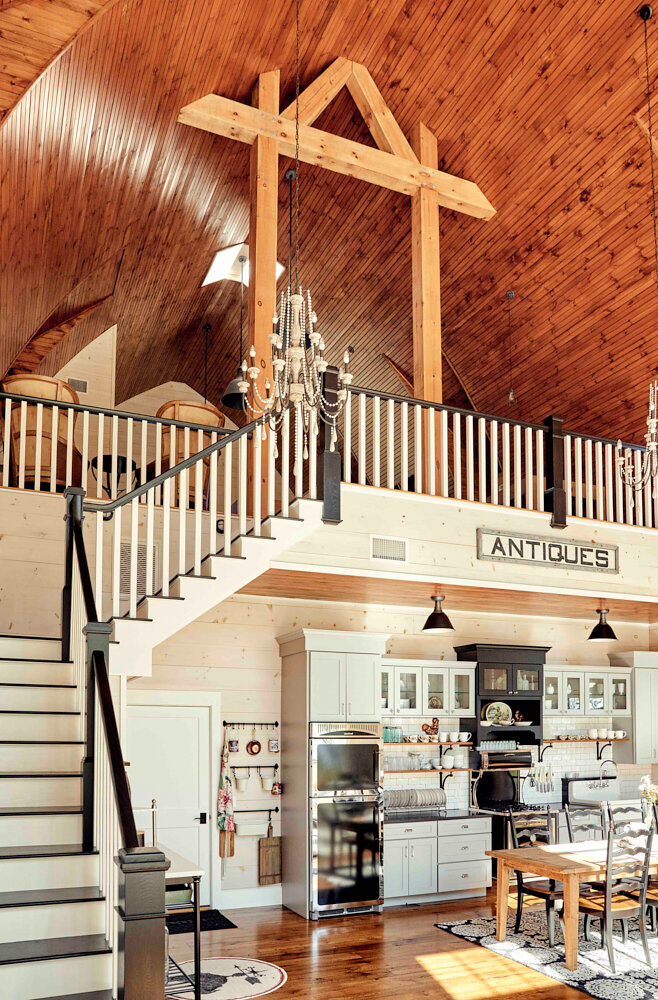 “I absolutely love the staircase,” says Nancy. “It has great presence in that space.” Tucked below is a charming kitchen with an antique feel. Cabinetry: Hancock Lumber. Countertops: Blue Rock Industries.

And it’s a grand scale indeed. The soaring ceiling looks like the inverted hull of a grand ship or the vaulted ceiling of a cathedral. Part of its drama is that it’s uninterrupted by beams or buttresses—it appears suspended, impossibly tall, over the dwarfed couches and armchairs below.

To support it, the team devised an elegant solution: curved trusses (“made locally by Mainely Trusses,” Matt says) and what Matt calls a “very large ridge beam running front to back,” supported by a pine post that goes through the second-floor loft. “The result,” he says, “is a pretty dramatic ceiling without any collar ties or barn-framing structure impeding the view from the loft out to the apple orchard and Casco Bay.” The pinewood for the ceiling and walls was sourced in Maine from Hancock Lumber.

The reclaimed white oak floors were sourced from Woodwrights Wide Plank Flooring & Architectural Doors in New York. Nursing them back to the condition the team had in mind was a painstaking process: “Each imperfection, large knotholes, splits, etc., all had to be filled with pigmented putty, sanded, stained, and finished,” says Matt.

With the impressive shell built, the tricky part came in building out fully functional modern entertainment areas within an impossibly lofty space and unusual architecture. Take where to fit the bar. The curved walls, where they arch upward into the ceiling, posed a challenge; adding to the puzzle was the fact that, as Matt says, “the walls were already sheathed, subfloors in, plumbing done.” The solution turned out to be carving into the barn’s very structure. “I knew that we had close to 16 inches of depth to the outside roof sheathing, as the trusses were substantial, so we came up with the idea to cut into the outside wall—between trusses—to carve out the open shelving for a back bar display and inventory storage,” says Matt. In the bath, a large shower was built right underneath the upward curve of the ceiling. To be in the space is to constantly be reminded of the grandness and unusualness of the architecture. 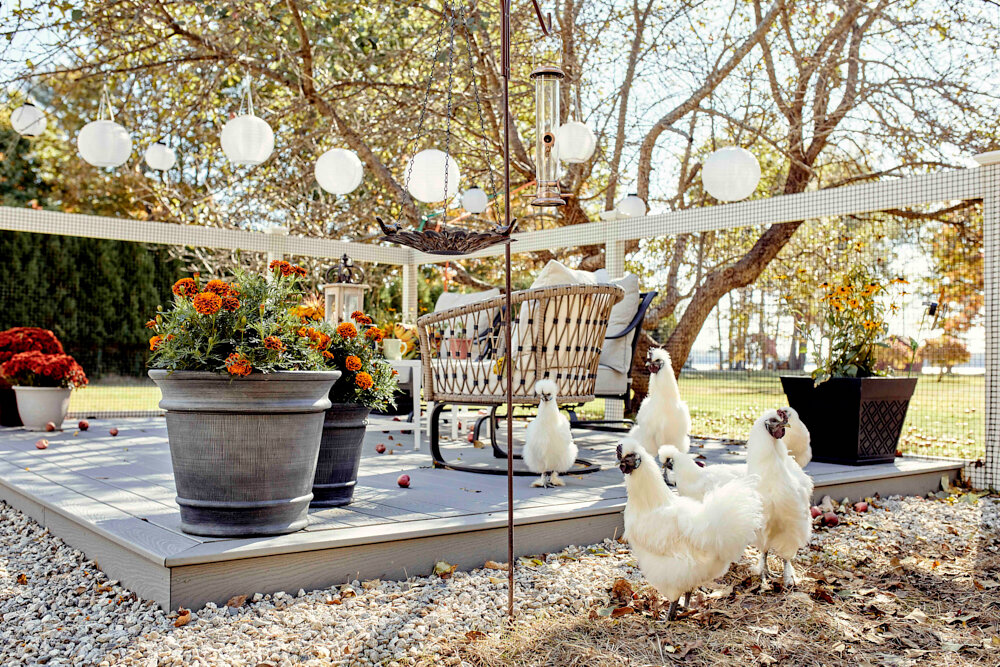 Adding to the old-time feel: a brood of white chickens pecking around the outdoor living spaces. 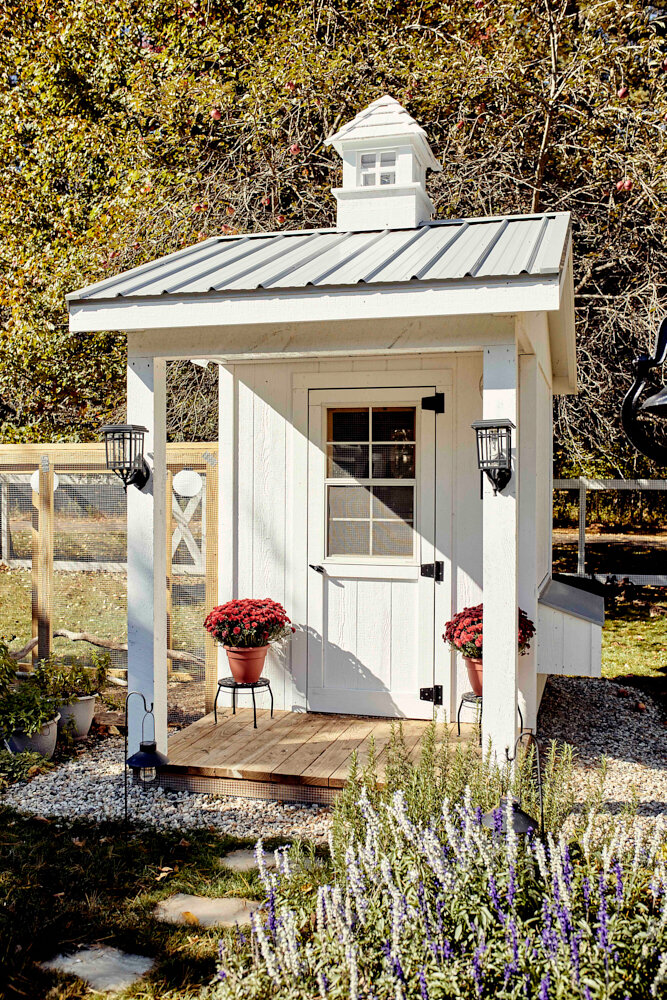 One of the smaller, but no less well-appointed, buildings on the property: a chicken coop (with cupola, lanterns, and front porch). 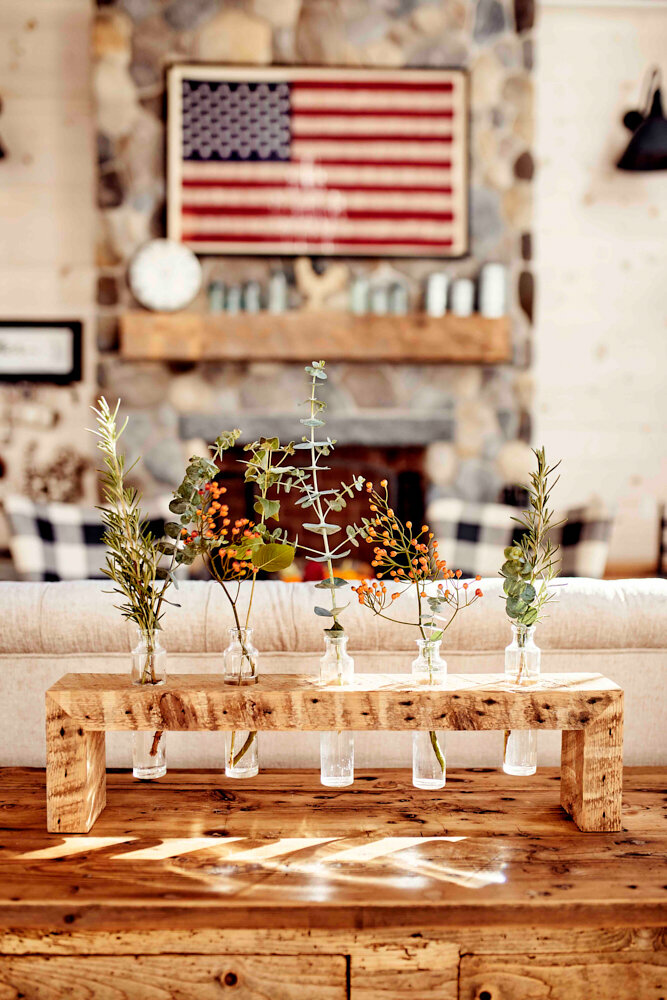 For decor, Nancy tended toward “vintage with a French feel—something I, at times have to keep under control,” she jokes.

The massive windows match the mammoth scale. “The span and size of them were so dramatic that it required two significant engineered beams to support the load and carry all of that glass,” says Matt.

Atop the barn are two cupolas with standing-seam copper roofs. “These were hoisted up in January—it was 19 degrees outside!” recalls Matt. Outdoors, the grounds are complete with a tall outdoor fireplace and chickens pecking around their coop.

“The barn space has been used exactly as we envisioned it would be,” reports Nancy, some time in. “It’s a great space to cook big family meals and watch football on a cold winter’s day. That being said,” she adds, “it would make a great wedding venue, don’t you think?” Cathedral-like indeed.