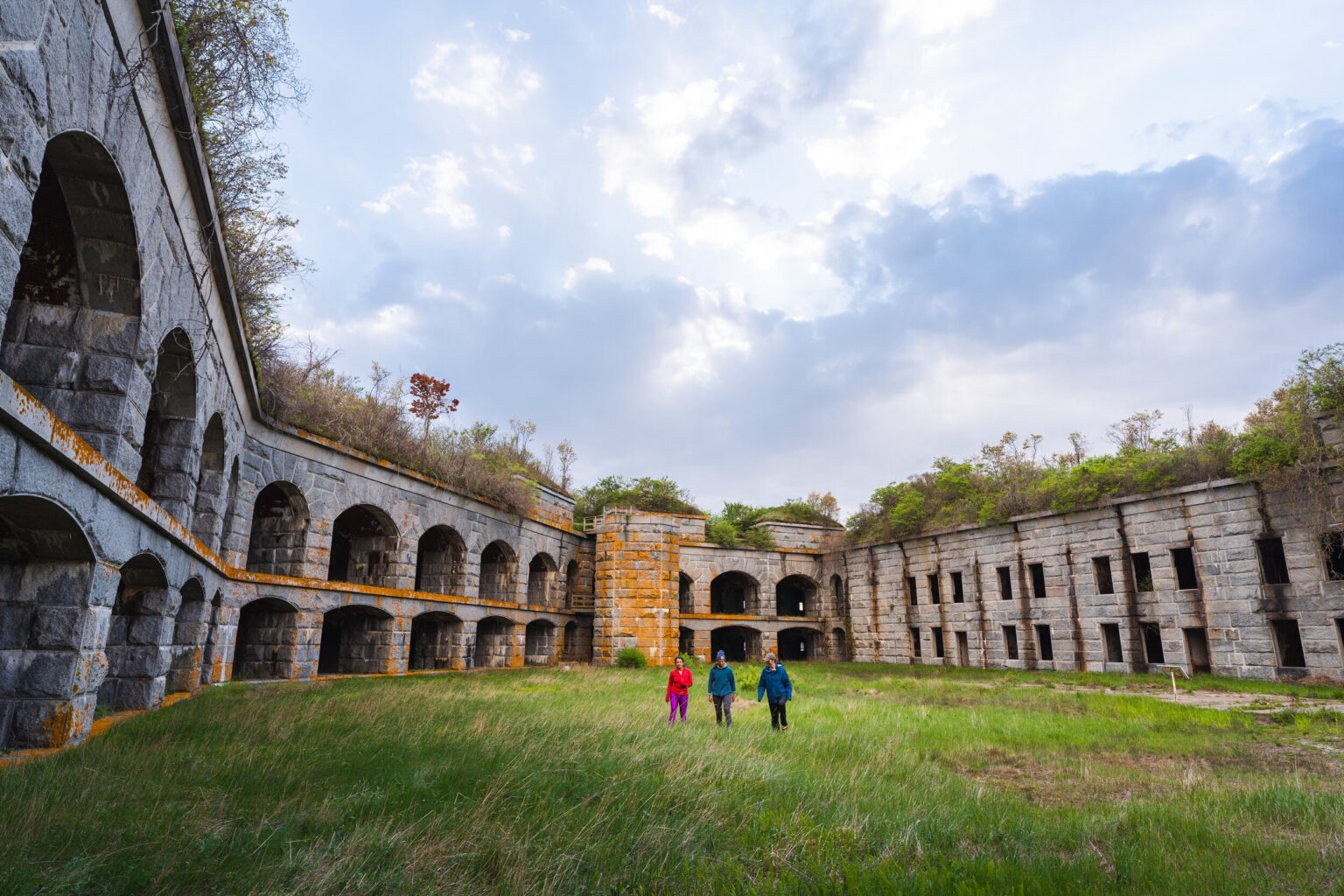 The first thing you notice about Fort Gorges it how it feels. From across the channel, a 19th-century military battery rises straight out of the sea: Massive granite blocks cutting clean lines against the sky, topped with a tangle of vines. For a moment, you forget you’re in the largest city in Maine. It’s just you, the wind and tide, and the looming slab of rock you’re bound for. You feel the crunch of beach beneath your boat, find your footing. Then you step inside the fort, and it’s silent.

“It’s like stepping back in time,” says Paul Drinan, executive director of Friends of Fort Gorges, the nonprofit organization working to restore the fort and preserve it as a historical, educational, and cultural resource for future generations. “When you walk through the space, just keep in mind, everything you see, except for the new metal [railings and gates]—everything is original.”

Fort Gorges was built on Portland Harbor’s Hog Island Ledge in the 1860s in reaction to the presence of foreign naval powers during the War of 1812, though by the time construction was finished, ironclad ships and their long-range guns had rendered it obsolete, so the fort never saw military action. A “sister fort” to Fort Preble in South Portland and Fort Scammel on House Island—both of which can be seen from the top of Fort Gorges—it was occupied by caretakers after the Civil War and was later used to store mines during both world wars. In 1960, the Navy transferred ownership of the fort to the City of Portland.

It takes a little imagination to understand how the fort may have looked in its heyday. A map of the grounds has been reconstructed with the help of the late Lida Dahl, who lived at Fort Gorges from 1904 to 1914 with her grandfather, caretaker Charles Rust. (The Friends of Fort Gorges’ workboat is named Lida in her honor.) “I remember her saying there were roses that came, and it was really pretty then. War was on the back burner,” says Lida’s granddaughter, Beverly Pickrell Dow. Although all that remains inside the many rooms are pigeons and the occasional bat, Fort Gorges once housed 56 cannon emplacements, a stone wharf that has since crumbled into the ocean, two outlooks, a magazine for storing ammunition, housing for enlisted men, and officers’ quarters with hardwood floors, grand fireplaces, brass doors—even a bowling alley. One can still find wild asparagus growing on the parade ground where a garden used to be.

“She would take a boat every day to school and back,” says Beverly. Indeed, the only way to get to Fort Gorges is by small craft: kayak, dinghy, sailboat, outboard motorboat. If you don’t have your own, Portland Paddle runs daily kayak tours from East End Beach. “She said it was quite a different way to live,” Beverly says. “When [the water] went out, they could walk around the outside a bit, but when they were in, they were in.”

“For a building that’s sitting in the middle of the ocean, it’s doing really well after 150 years. But it needs some TLC now,” says Ethan Hipple, director of Portland’s Parks, Recreation, and Facilities Department. A 2017 engineering survey determined restoration needed to begin by 2022—and time is running out. The fort is protected as one of Portland’s 67 parks, but resources are tight and the city’s responsibility to higher-use areas such as playgrounds, athletic facilities, and sidewalks means partnerships with organizations like Friends of Fort Gorges are essential. A $500,000 fundraising campaign is under way to fund preservation efforts, with the city poised to match the goal. “We don’t want to set off alarm bells,” Paul says, “But the fort needs the community.”

If this structural work can be done, the future of the fort is bright. With infrastructure like bathrooms, water, and a restored wharf, Fort Gorges could function as a concert and event venue and a more accessible destination for school groups and the general public. “If we just do a few simple things, we’ll be able to maintain it for future generations to come,” Paul says.

The fate of the fort has attracted wide local interest, from developers to community stakeholders. But there’s another voice here, too, though it’s harder to hear. Restoration in its truest form is the act of listening to place.

“The thing that I love most about it is that sense of wonder you get when you go there,” Ethan says. “One of my favorite memories is bringing my family out there, and my kids—they were teenagers at the time—just seeing their eyes just open wide. And them saying, ‘Oh, we can’t wait to come back here.’ That’s the magic of parks, right there.”

t’s not just Fort Gorges that needs preserving—it’s also the sum of its parts. The sense of wonder. The opportunity for adventure right there in Portland Harbor. And that feeling when you step through the sally port onto the parade grounds and find yourself in a rare moment of silence.

Daily kayak tours of Fort Gorges can be booked through Portland Paddle: portlandpaddle.net. 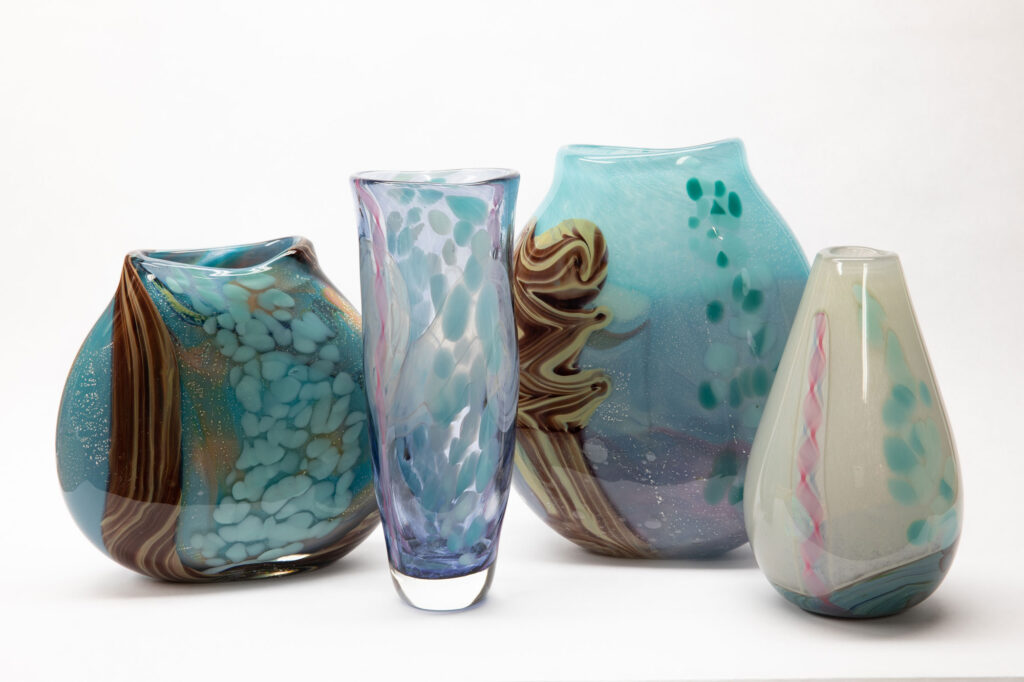