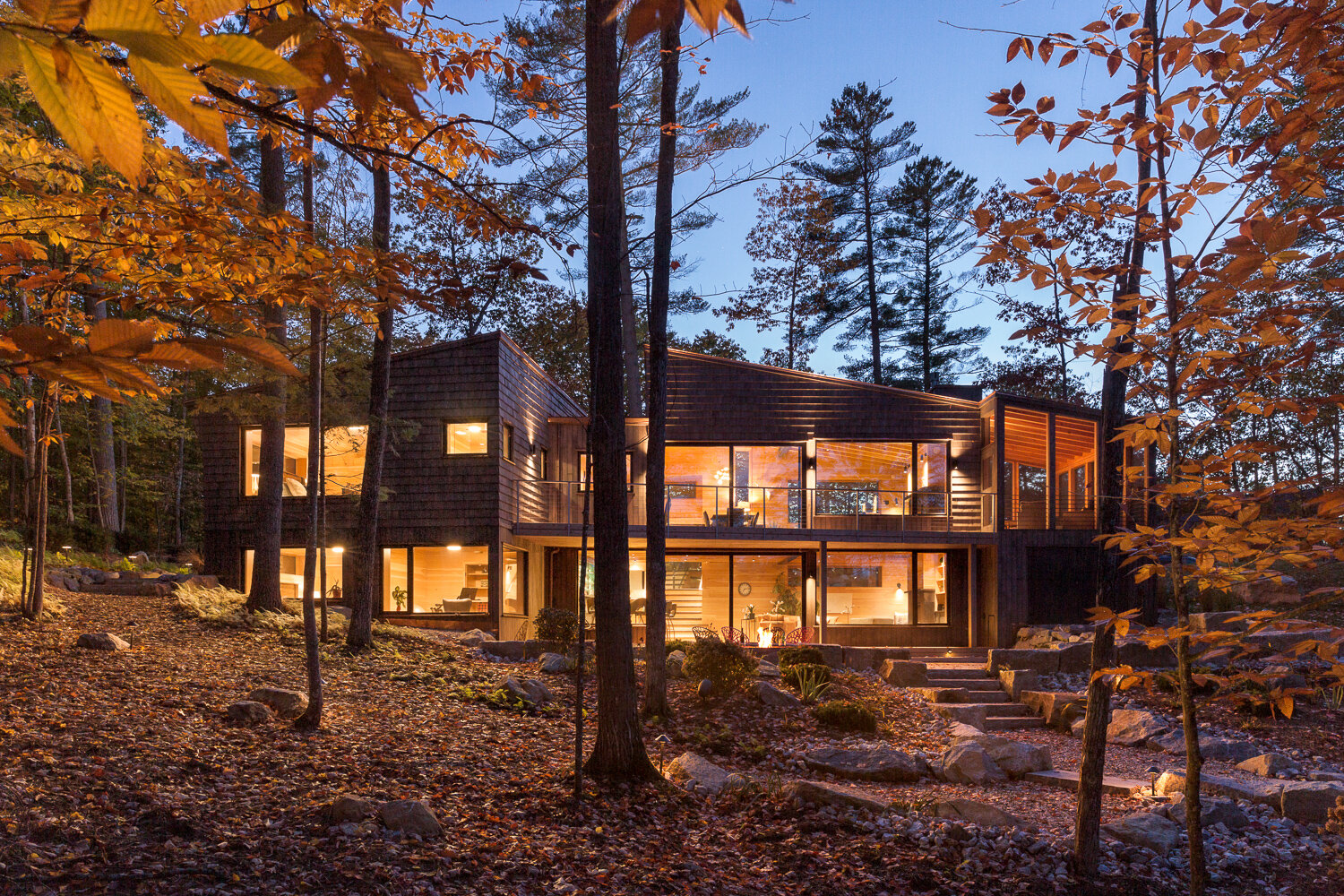 A view of the house showing stacked great rooms on the right and private quarters on the left.

Initially, Vaughn and Christine Clark weren’t even sure they planned to sleep in the house they were hoping to build on Round Pond in Greenwood. They already had a ski house in town, across from one of Mount Abram’s chairlifts. Why another so near? Vaughn, who is president of The Thomas Agency and part owner of Mount Abram Ski Area, admits that there was no “real logic” to the land purchase. The couple simply could not pass up the opportunity for a unique spot on the water and “in the community we treasure,” says Vaughn. The new house would be a place to entertain.

In early 2015, Eric Sokol of Winkelman Architecture and Jesper Kruse of Maine Passive House finished a small addition to the Clarks’ ski house. The Clarks were so delighted with the results, they turned to the pair for the new endeavor.

Beyond sheer beauty, part of what made the new location special was that one could boat to three ponds from its shore. But the forested one-acre parcel had some downsides. It was a sloping piece of land with setback restrictions from the water, the road, and neighbors. The actual buildable area was relatively small.

Sometimes constraints flip into virtues. By puzzling out how to give the Clarks what they wanted in the available footprint, Eric created, and Jesper built, a light-filled, contemporary camp, warmed by the abundant use of wood, and with open spaces and views, inside and out.

For the design, Eric essentially stacked one great room on top of another. The ground floor has a den and bar.  A living room/dining room/kitchen with adjacent screened porch sits above. These public rooms are tucked under an impressive mono-pitched copper roof, which comprises the large slanting volume you see when you approach the house. A smaller slanting roof tops the private spaces—the master bedroom upstairs, guest room and office below. Box forms for the flat-roofed connector and entryway complicate the overall profile, as does the mixed use of cedar shakes for the sloping forms and cedar planks for the box forms. Copper was also employed for the gutters, exterior window trim, and foundation flashing.

One enters the house in its vertical center, almost as if stepping into a split-level, but a split-level whose walls and stair risers have been selectively removed to open views. As a result, one simultaneously sees through the house to the water and into the house for the drama of both great rooms. 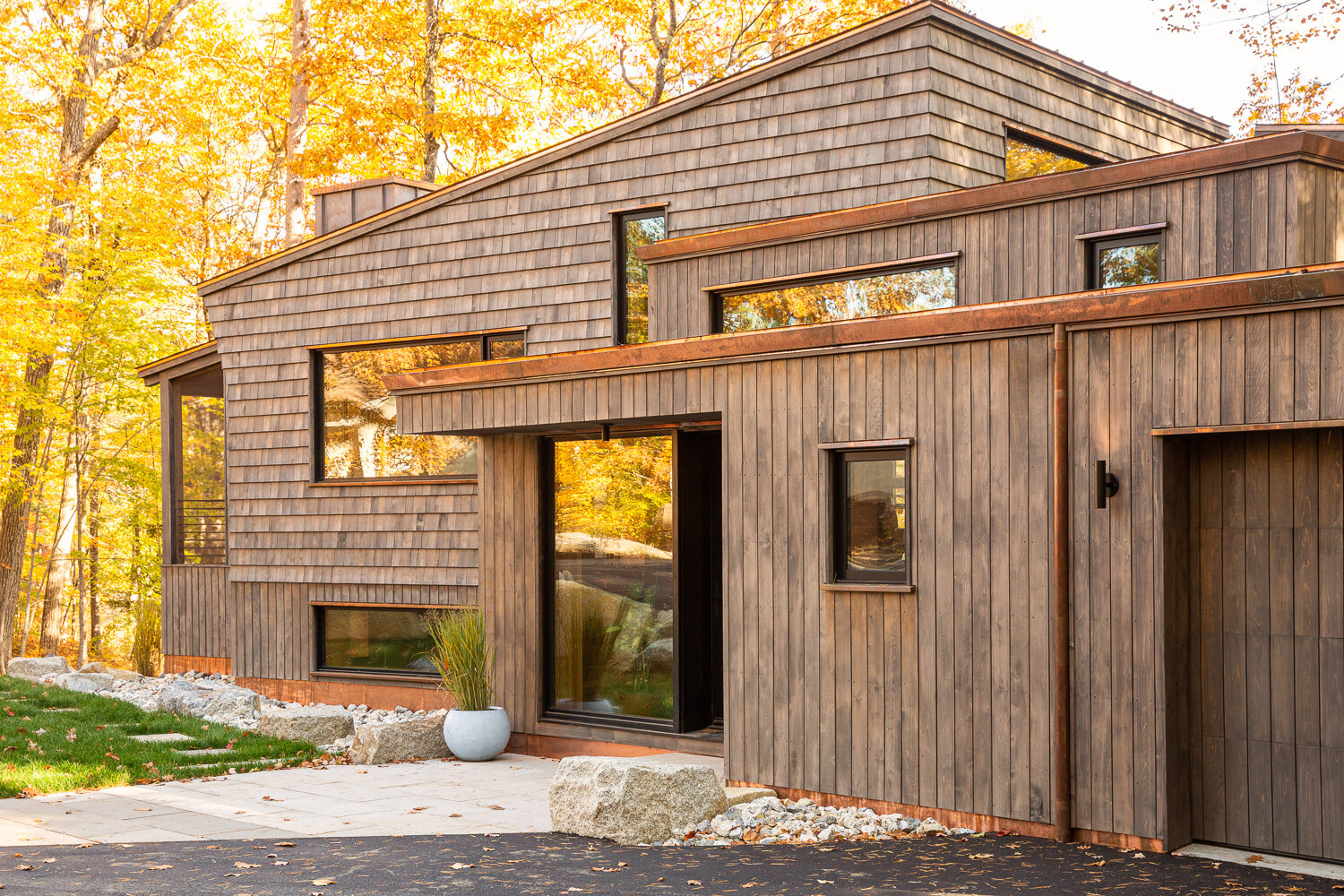 Front entry with copper detailing shows cedar planks on the flat roof forms in the foreground and cedar shakes under the slanting roof behind. 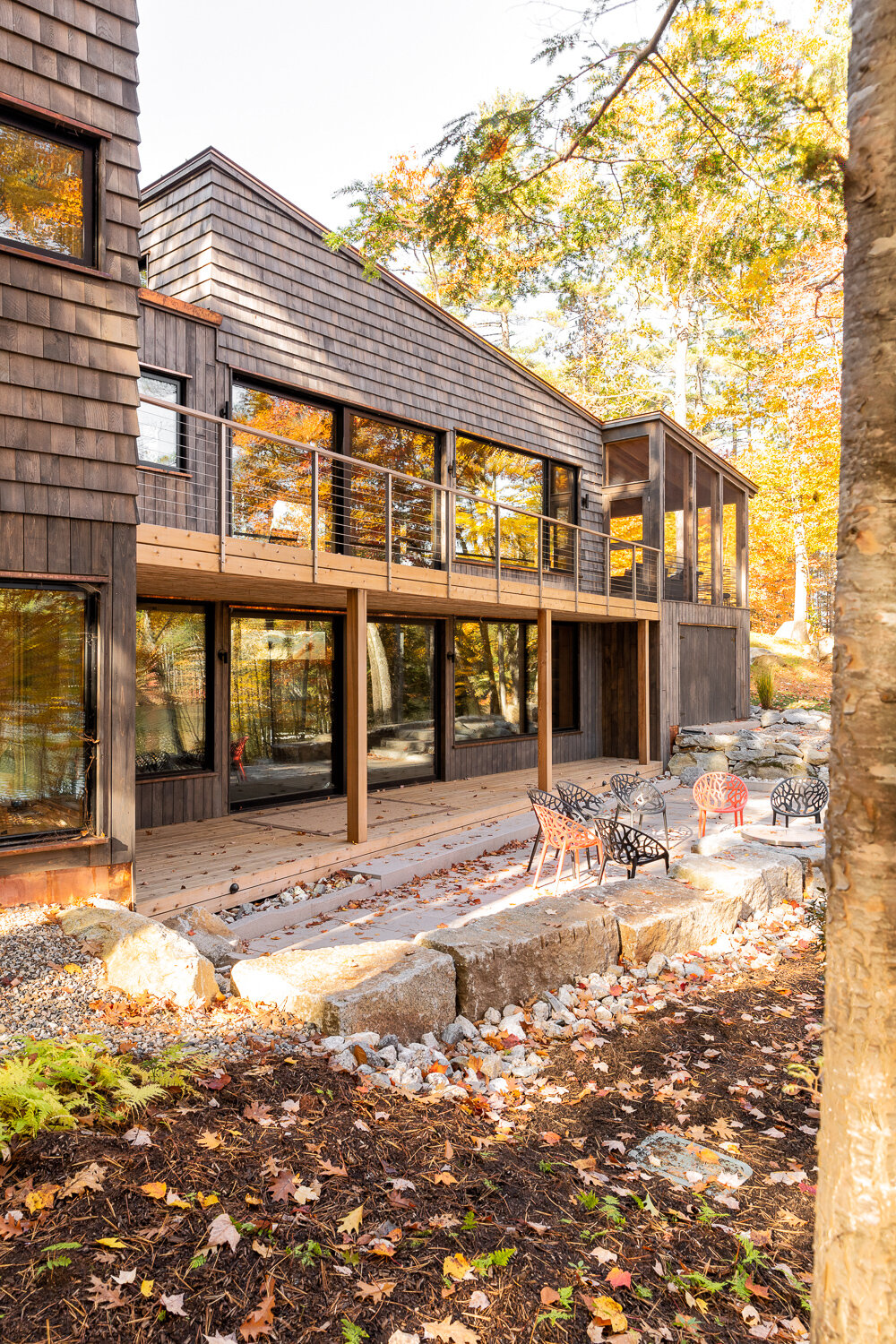 Porches run the length of the great rooms. At the far end of the house, a screened porch sits over a shed for lake gear. The shed was incorporated into the house because permitting allowed only one structure on the property. 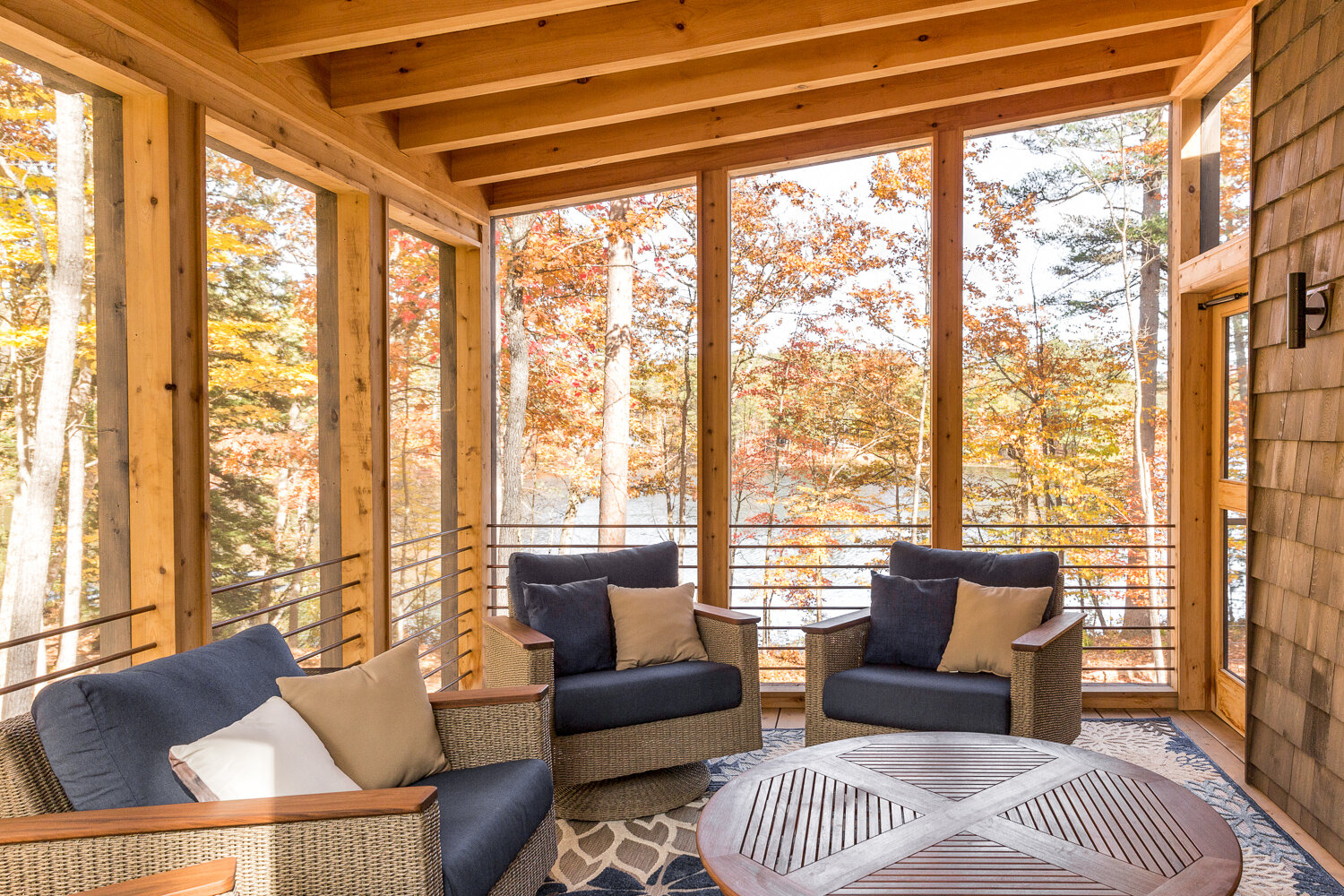 The screened porch with fireplace is the homeowners’ favorite place to be. 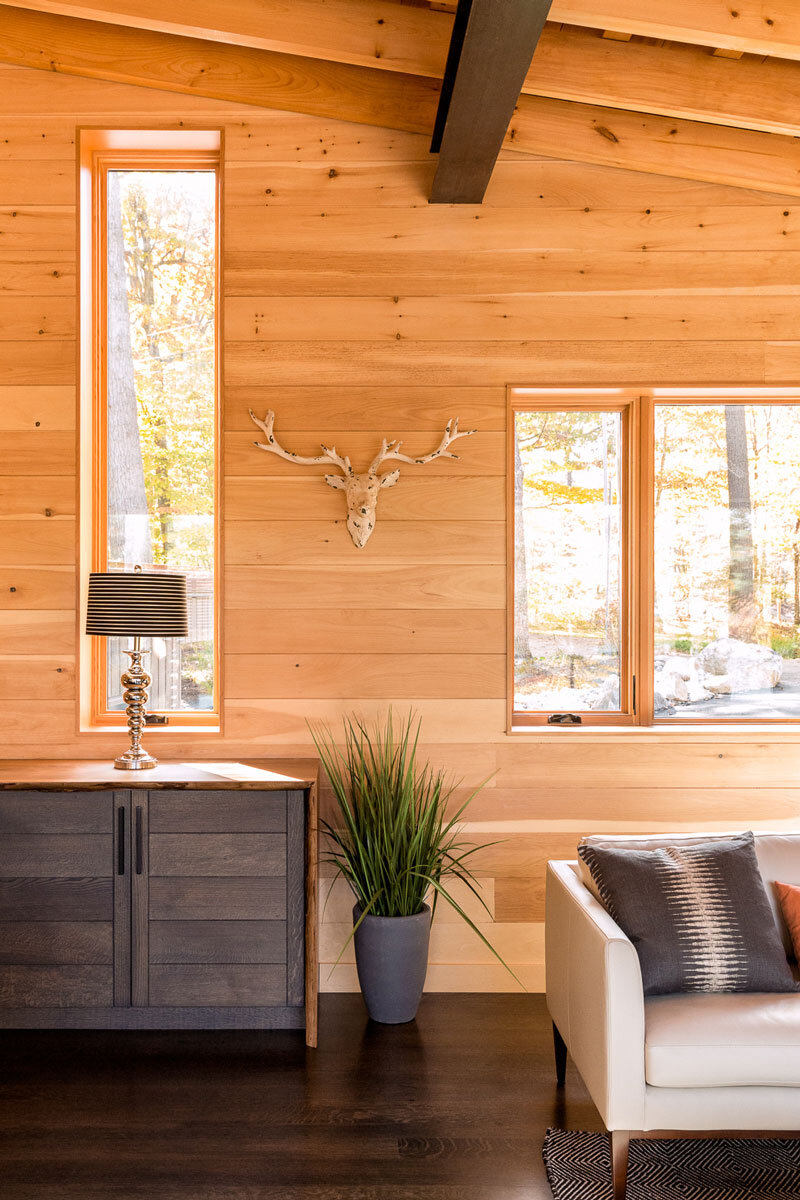 A detail of the living room showing pine walls and the edge of a custom sideboard whose white oak drawers are stained the same custom blue-black used on kitchen cabinetry and elsewhere in the house. 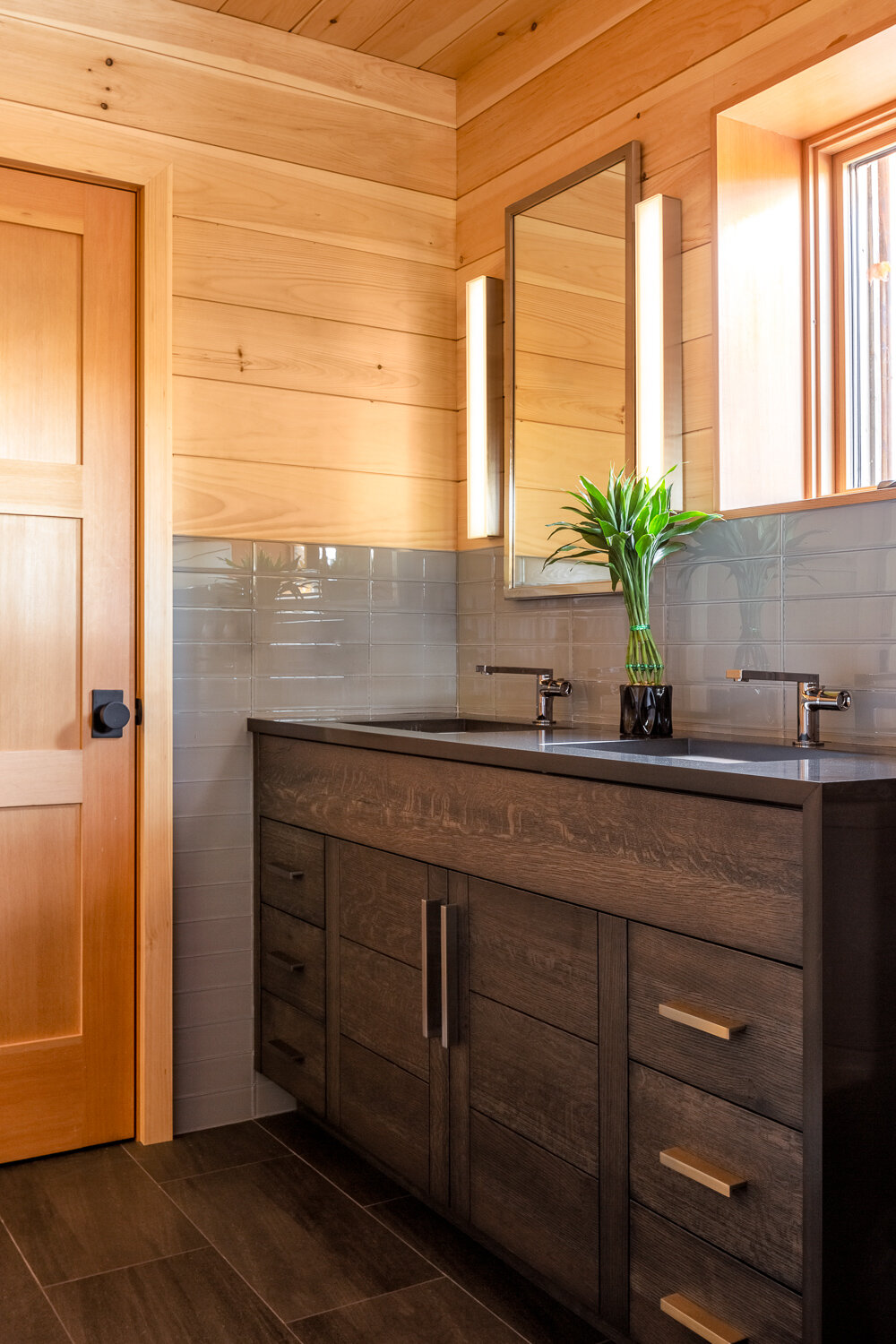 For consistency, the same tiles (from Old Port Specialty Tile) on the bathroom wall and stair on the custom vanity were used in the kitchen.

Because the house was envisioned as a camp—if an upscale one—traditional pine was chosen for the walls and ceiling. A black steel beam in the living room provides structural support and contrasts nicely with the amber of the pine, so black was used as accent color elsewhere. The fireplaces are black steel. The kitchen cabinetry has a blue-black stain, and the white oak floor is stained a dark gray.

A camp might feel gloomy without white walls to reflect light. A passive house could conceivably “feel” heavy, given the thick walls and roof needed to create a supertight, well-insulated, well-sealed envelope. To offset this and create a bright, airy space, Eric and Jesper wrapped the house in (triple-glazed) windows, adding some simply to bring in light, as with a clerestory window above the kitchen. Others facilitate views, as with the glass doors that line the lakeside of the house and make for a seamless transition to the upstairs porch or downstairs deck. 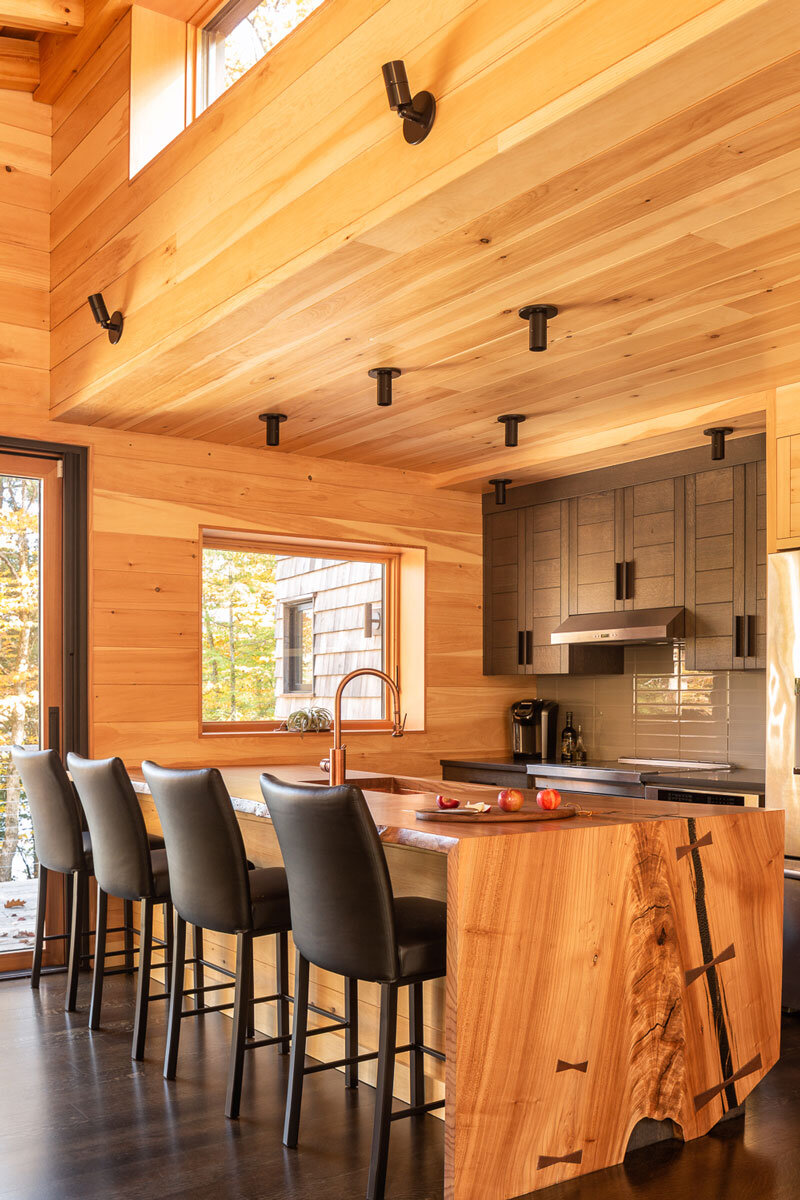 Upstairs kitchen with custom cabinetry and island by Robie Wentworth. 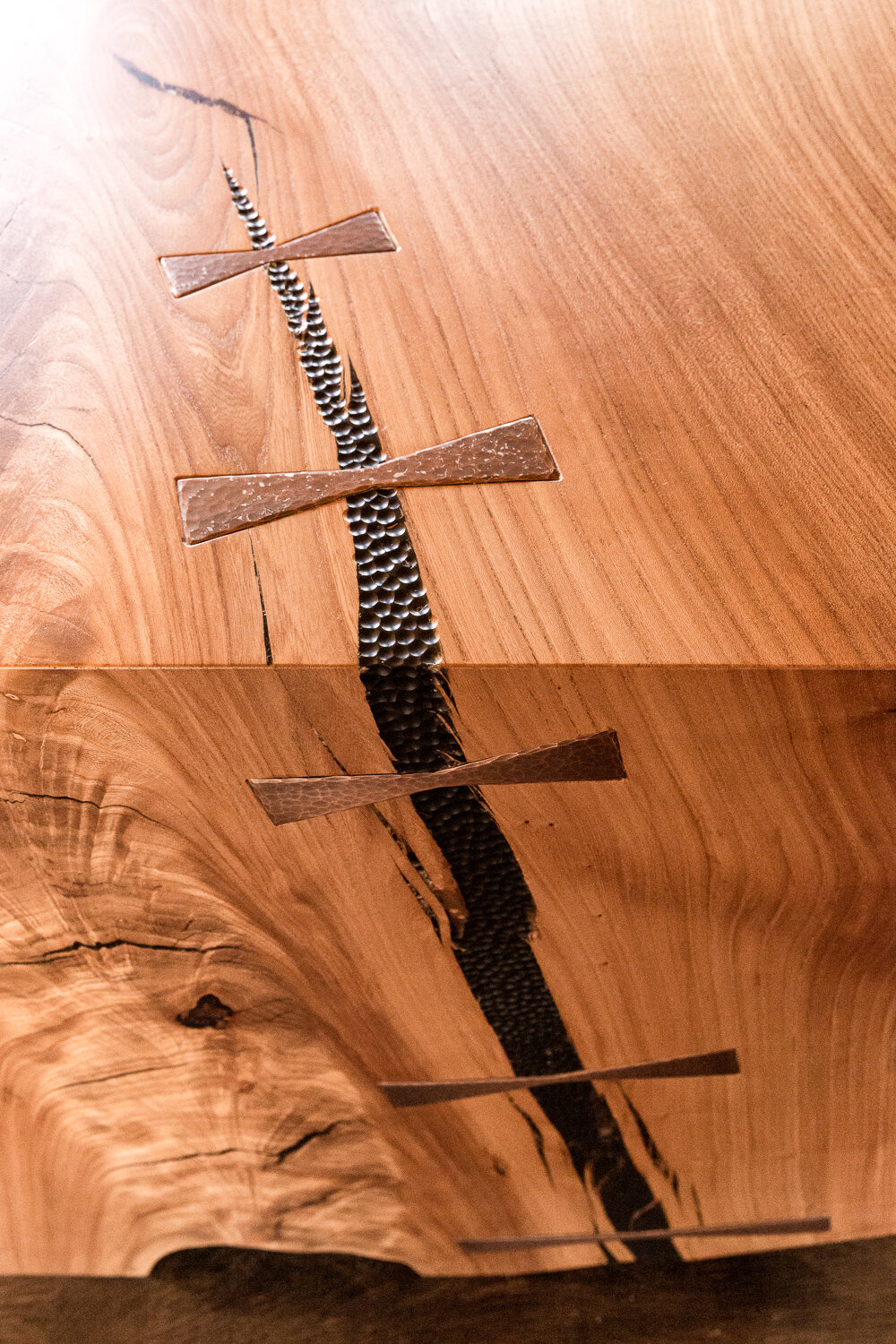 A crack in the kitchen island was filled with black epoxy, which was then hammered and spanned with copper bow ties. 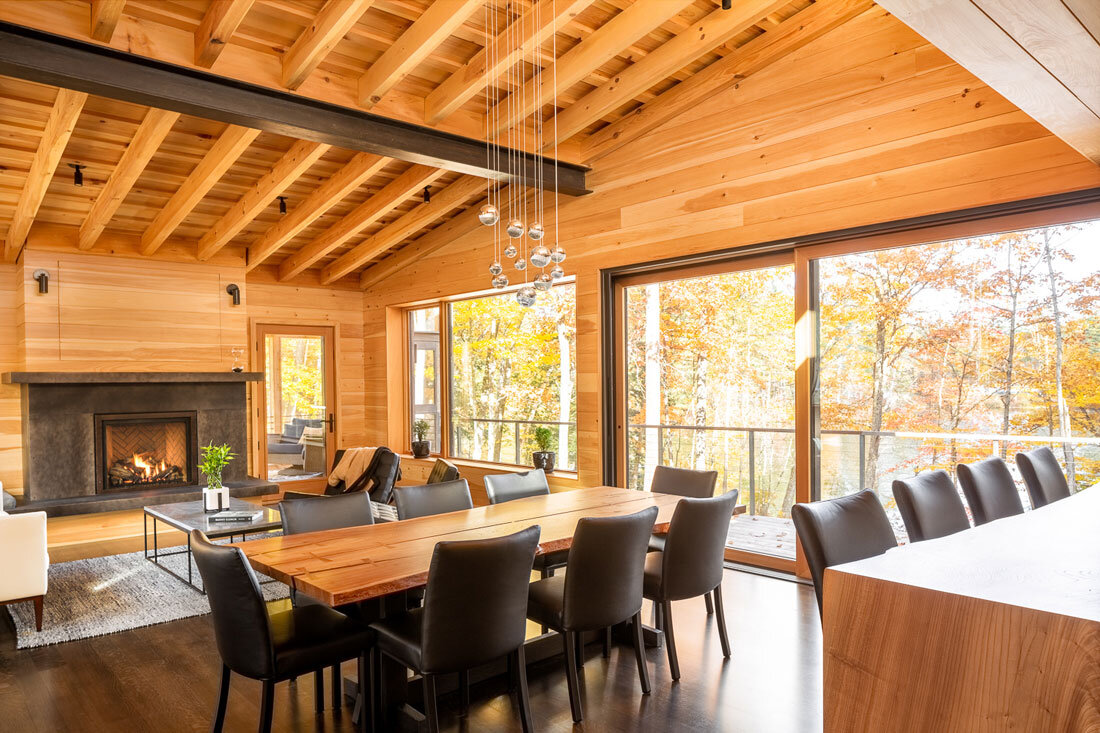 The wood’s warmth made black a natural contrast for the furnishings. Robie Wentworth made the dining room table with a live edge.

Robie Wentworth, a custom woodworker who lives just down the road from the lake house, built furniture for the Clarks, including an English elm kitchen island with custom-stained quartersawn white oak for the cabinetry. Robie filled a crack in the island’s wood with hammered black epoxy, which he then spanned with copper bow ties. Robie also used bow-tie forms (this time in wood) for a live edge dining room table. Another live edge piece—an unusual banquette—marries an English elm slab with drawers of stained white oak and a piece of glass to keep the view to the entryway open.

An advantage of the Clarks’ already being comfortably situated in the area in which they were building—they also live in Portland, because Christine teaches at Old Orchard Beach’s Loranger Memorial School—is that the builders didn’t feel pressured to hurry. As a result, the crew could attend to special details—like remote-controlled wood panels to hide TV screens and adjustable bar shelves with interior lights. 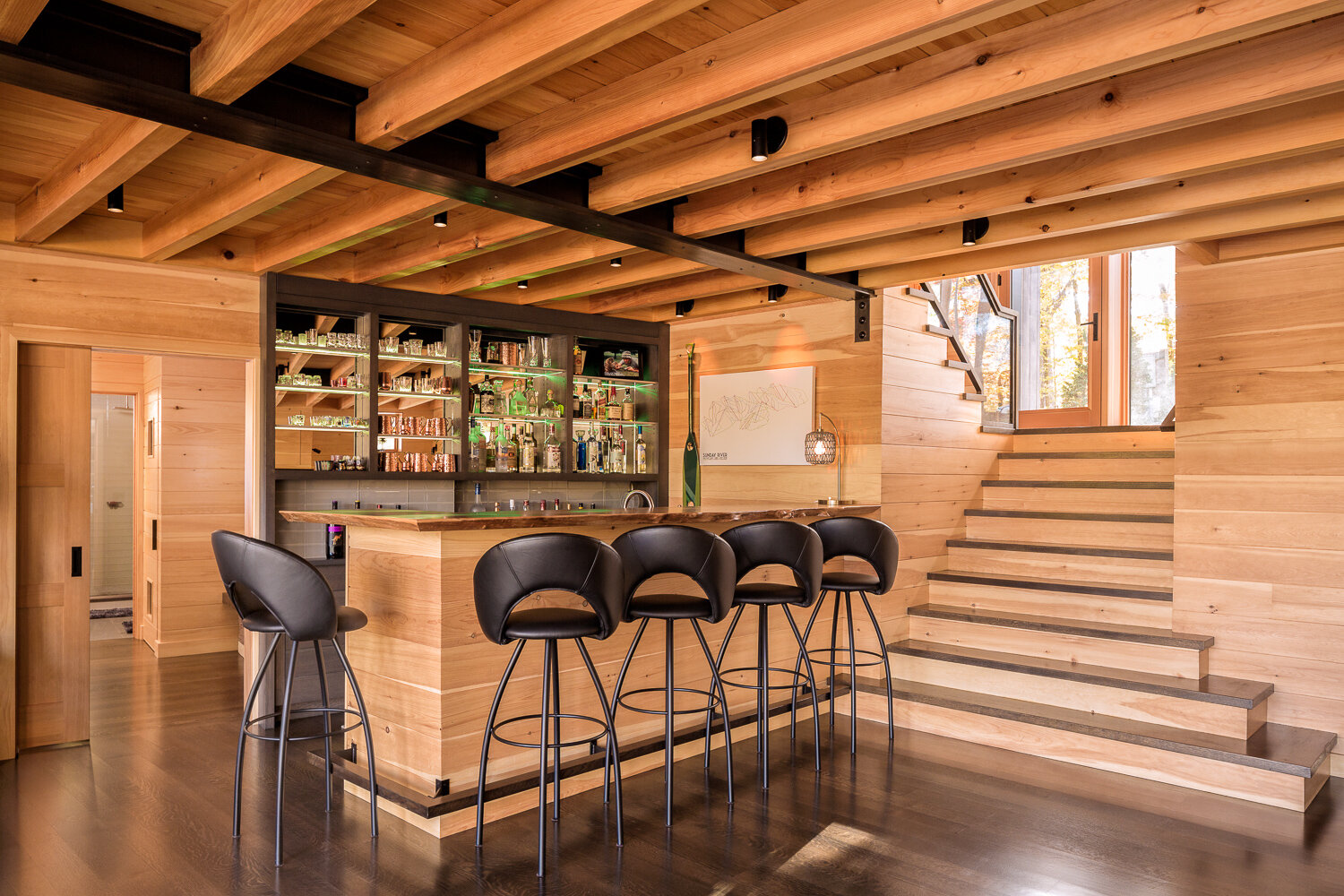 Woodworker Robie Wentworth made the built-ins throughout the house, including the ground-floor bar, which has an English elm countertop and adjustable illuminated glass shelves. 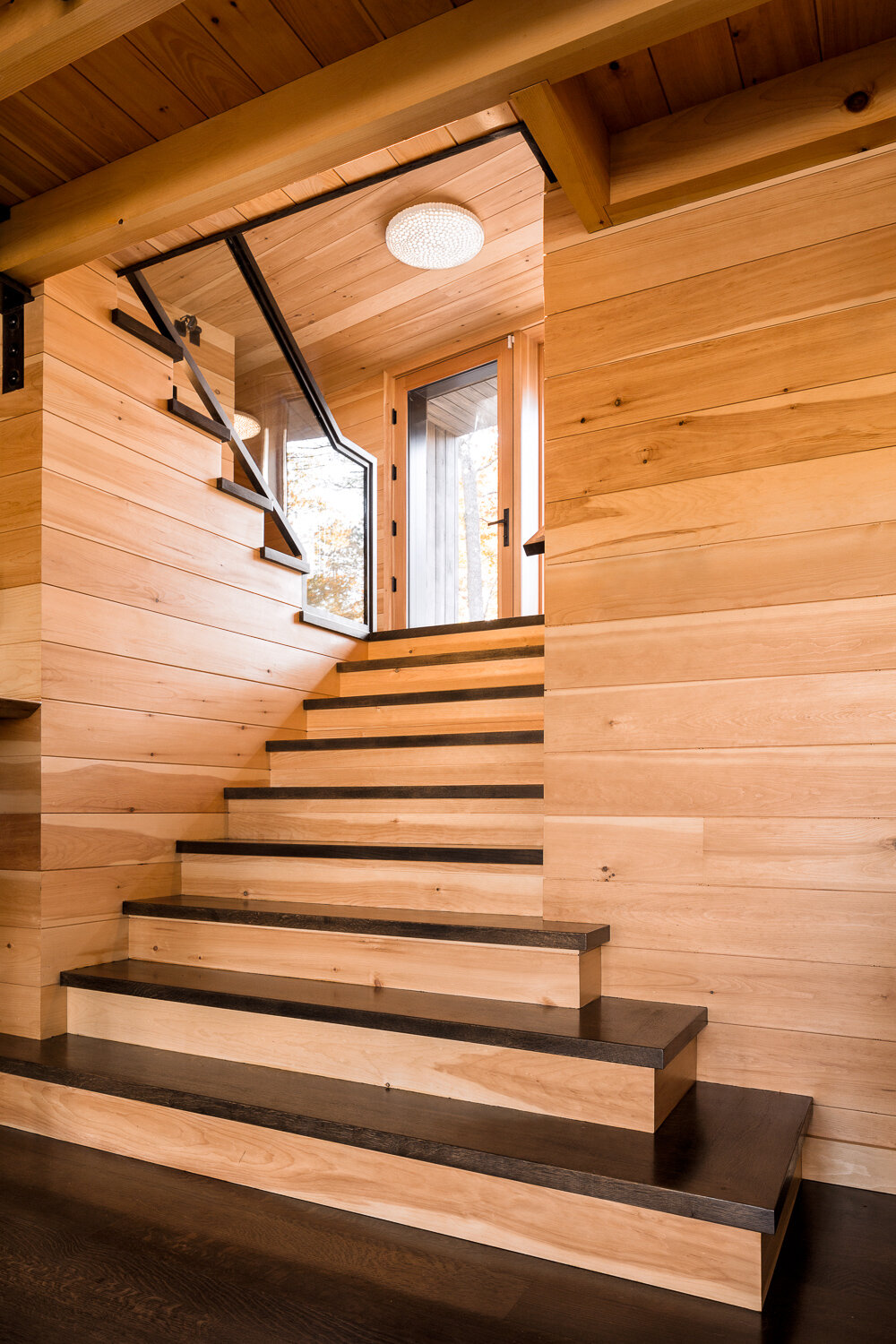 Stairs from the foyer into the ground-floor great room were made to be visually simple and open. The treads are white oak and the risers are pine. 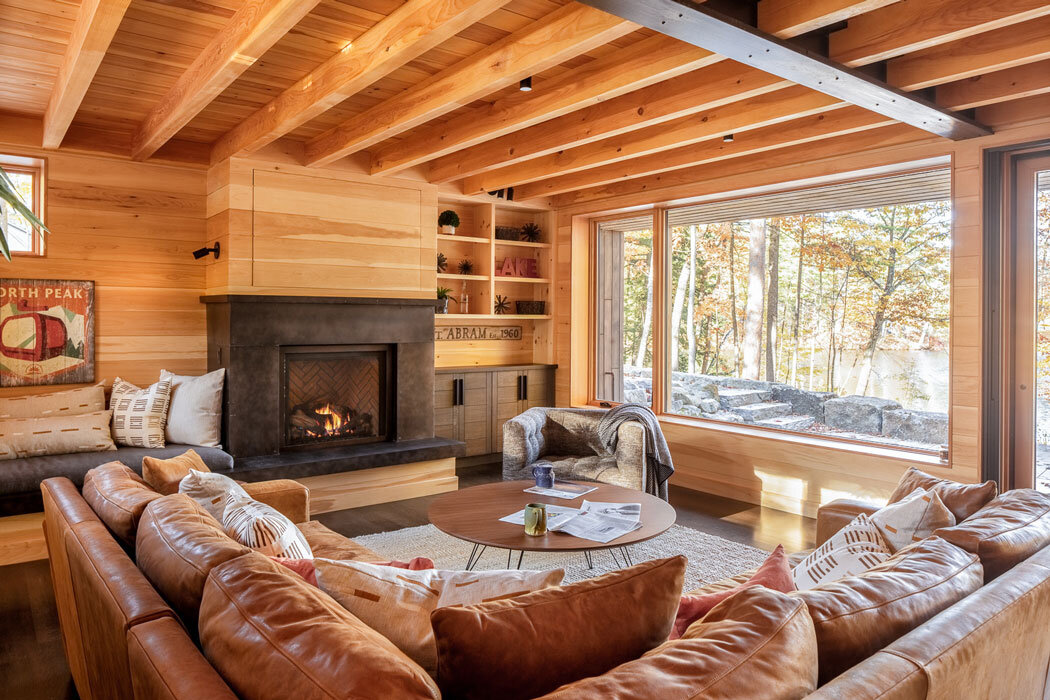 Ground-floor great room. The panel above the Western Maine Steel fireplace slides away to reveal a television.

For the grounds, Jason Shiers of Pleasant Hill Property Services in Norway worked with Ryan Russell of Land Plans in Cumberland to blend the home with its surroundings, designing a landscape that makes abundant use of rock. The entry has autumn-mist granite pavers. The back patio and a walkway to the water are defined using round rock from the property (produced after blasting for the foundation) and rectangular blocks salvaged from the Million Dollar Bridge that once joined Portland and South Portland.

By the time the project was done, the Clarks had not just a place to entertain, but also, Vaughn says, their “dream house.” The ski house will most likely be rented and perhaps one day sold. For the moment, COVID has put a crimp in entertaining plans, but the ever-cheerful Vaughn says, “Someday soon, though. Someday soon.” 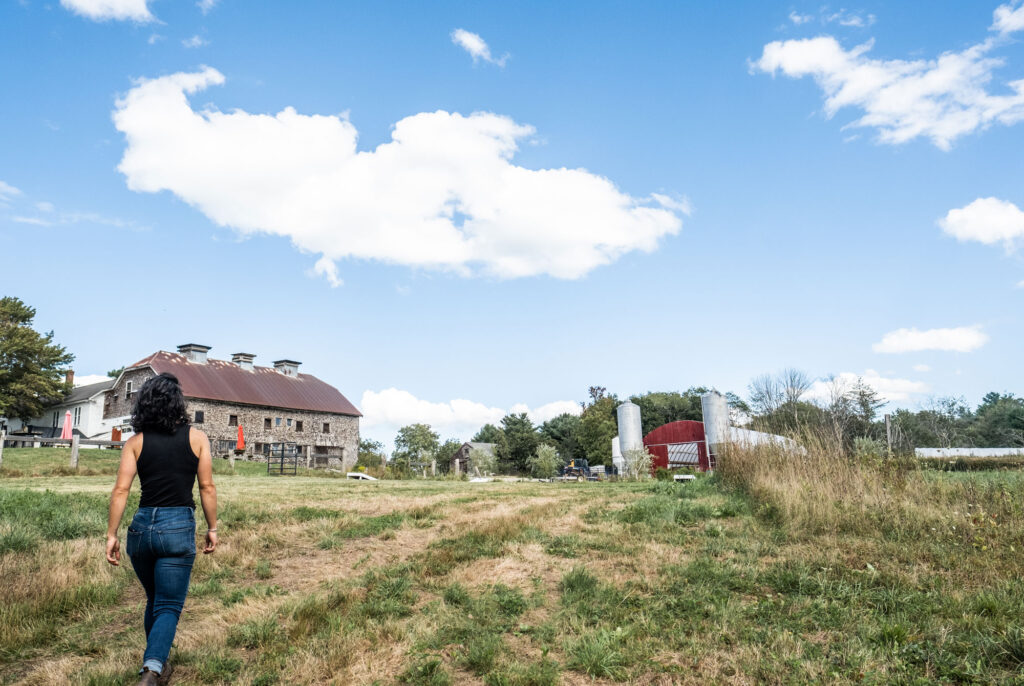