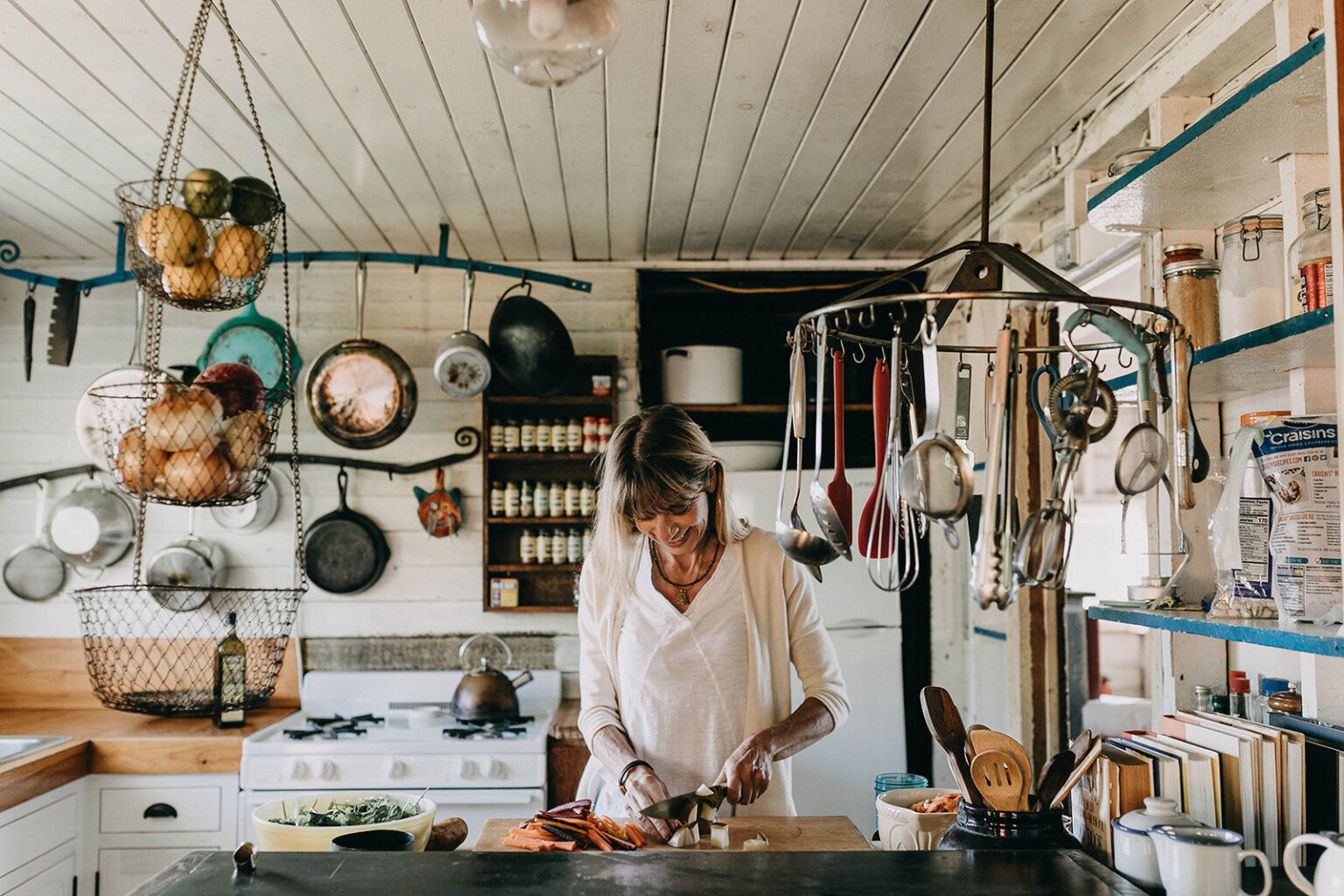 Since the late 19th century, artists have been drawn to Maine, most particularly her rugged isles for their unflinching solitude and unsullied beauty. Monhegan Island (its name means “out to sea island” in Algonquin), floating 12 miles off Maine’s midcoast, is one of the most renowned. Captured on canvas by painters such as Rockwell Kent, Jamie Wyeth, and Edward Hopper, it continues to attract artists and their appreciators to this day.

Sarah E. Webb is one of them. A multidisciplinary artist with a career woven of many threads—writer, independent curator, and yoga instructor—she first encountered the island the summer of 2005. “I knew from the moment I got on the boat that this island spoke to me in a soulful way,” she remembers. “I had barely walked up the dock and there was something inside of me that said, ‘I don’t ever want to leave.’”

She and her now ex-husband rented a home on the island for a week and were so taken by the experience, they returned every year with their children. The home they rented, a three-bedroom, one-and-a-half-bath shingle-sided dwelling, was built in 1953 by Herbie Kallem, a metal sculptor and painter, and his wife, Sally. “Herbie and his wife primarily built the house, just the two of them, with some people coming in and helping,” explains Sarah. “Basically, they built this house by hand, in part from other houses on the island.” A style Sarah calls “Classic Monhegan Rustic.” 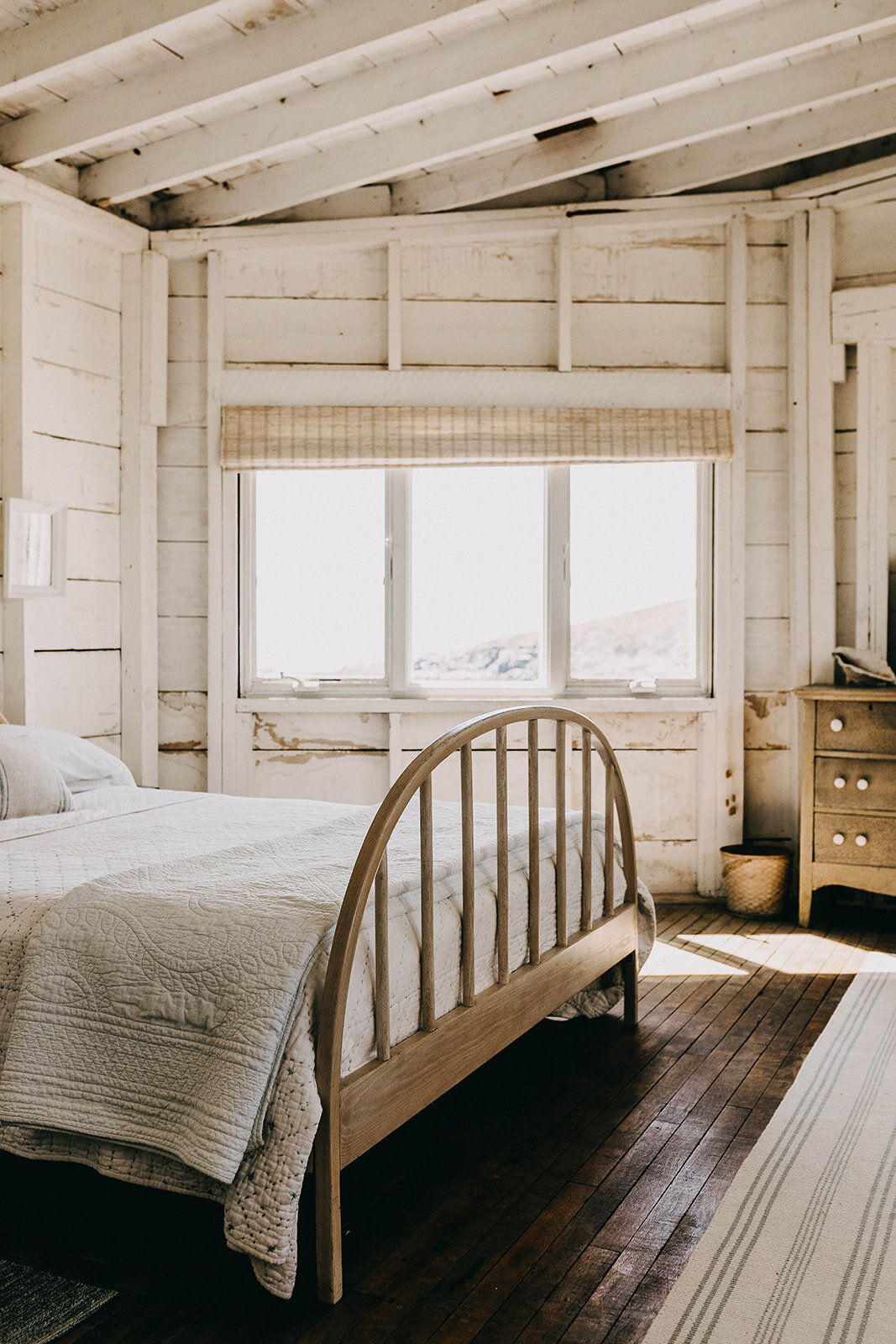 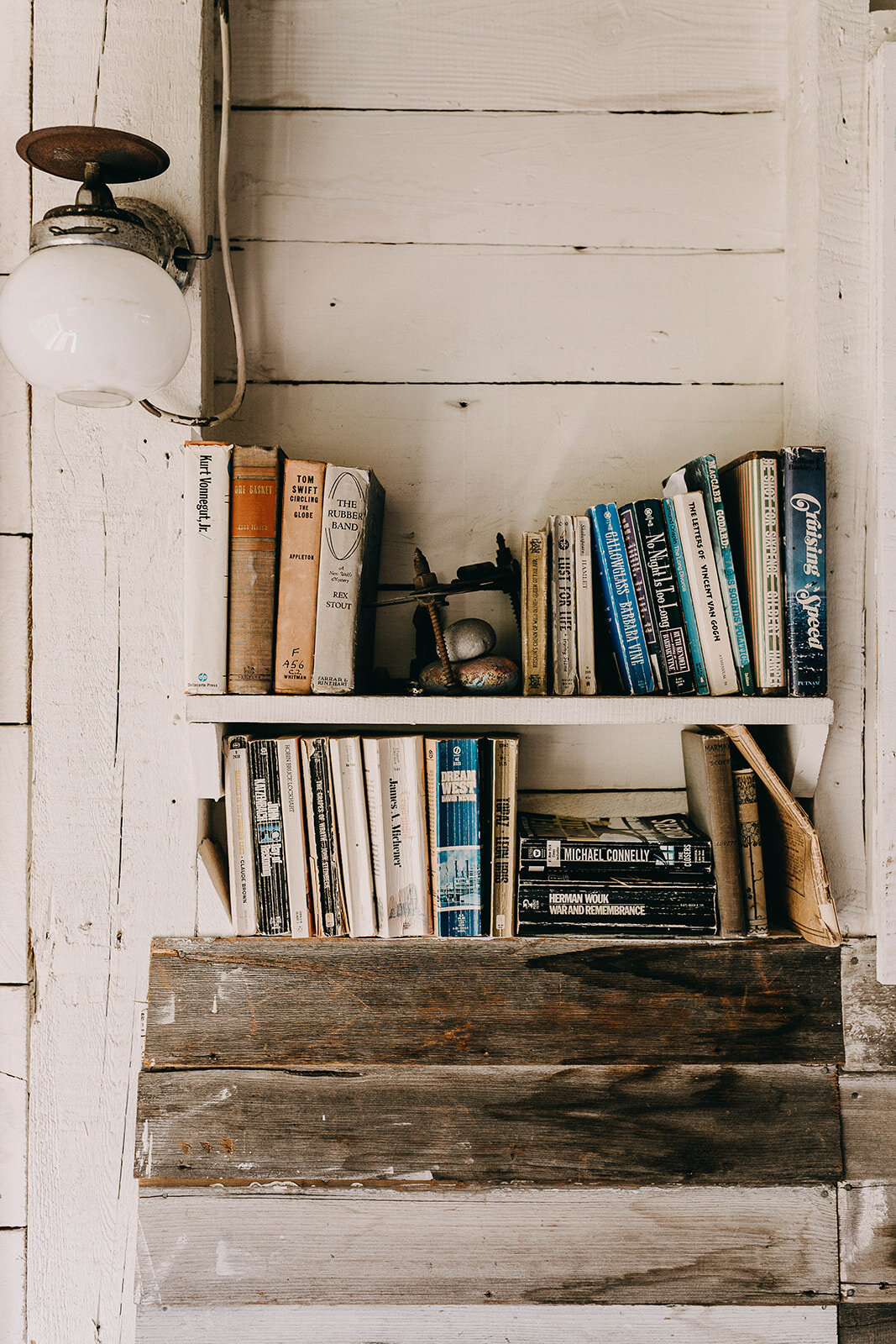 Books aplenty and light to read by.

“That’s the way a lot of things out on the island get built. It’s this very pioneer spirit,” says Sarah, noting that even this midcentury cottage retained a centuries-old simplicity, with a woodstove for heat and propane lamps to light the rooms. It was electrified only in 2019. When the owner, Kim Murdock, decided to sell, she sold it to Sarah, making her only the third owner in nearly 70 years.

When Sarah divorced, she found she relied on her island neighbors more than ever. “I actually ended up working in the grocery store. I baked all summer long and made lunches. And that was a really helpful thing for me to realize, I was going to make it no matter what. I could be alone, but I could also survive because I wasn’t alone, that there would always be a community of people around me.” Sarah also served on the board of trustees at the Monhegan Museum and now holds a women’s writing and meditation retreat in the fall, as a way of sharing the island’s inspiring community.

“I knew from the moment I got on the boat that this island spoke to me in a soulful way,” she remembers. “I had barely walked up the dock and there was something inside of me that said, ‘I don’t ever want to leave.’”

If the sharing economy seems a newish trend on the mainland, it is simply the way of life on the Monhegan and neighboring Manana Island, where year-round residents, particularly, make do by pooling resources. The house is testament to this—built by Herbie, in part, from other island structures. The sitting room walls, stained and striped with time, were salvaged from the island dance hall. Other portions of the house were fashioned from neighboring homes whenever there was a teardown. History seeps out of the boards, varied and various in shades of brown and tan, silver and gray. 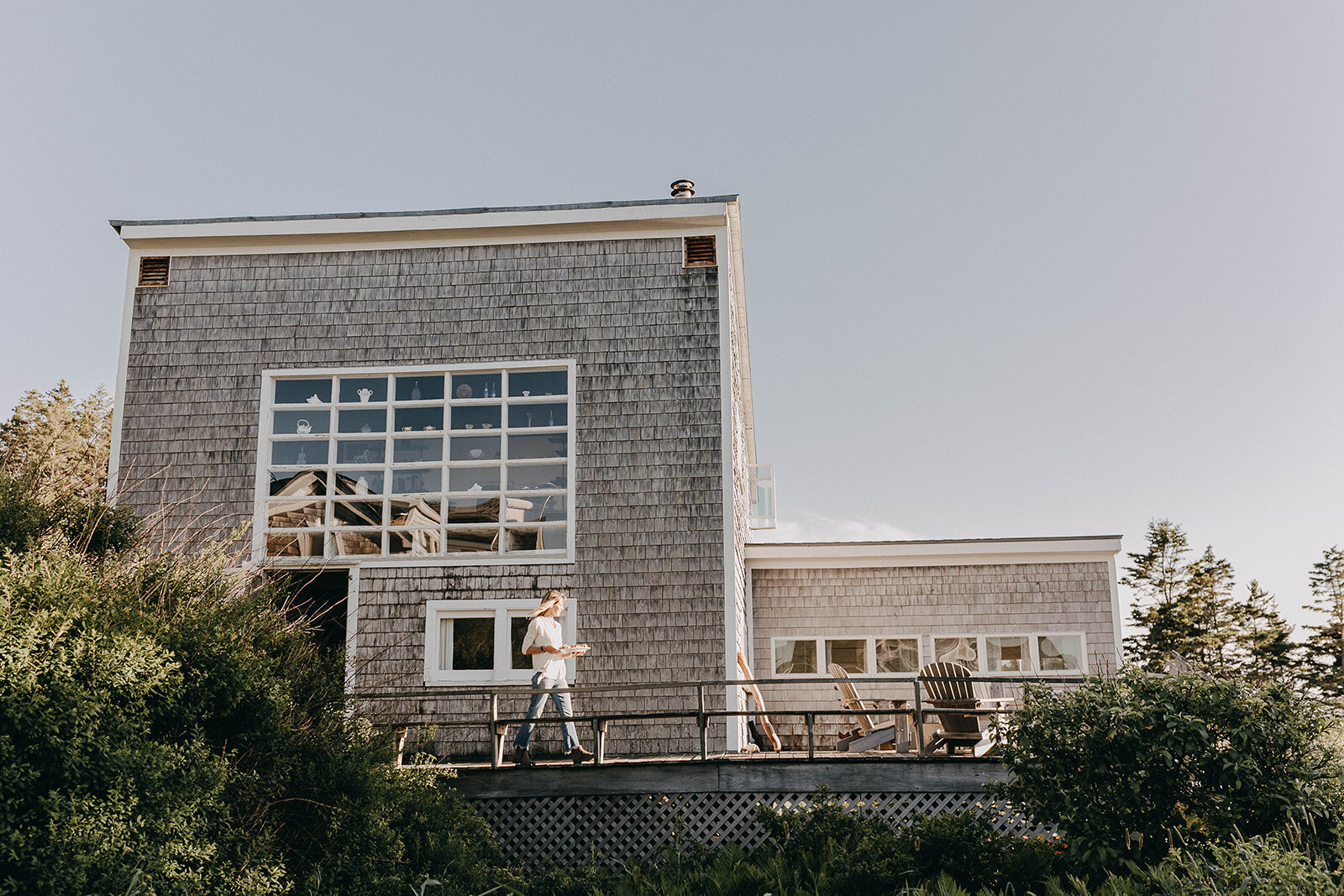 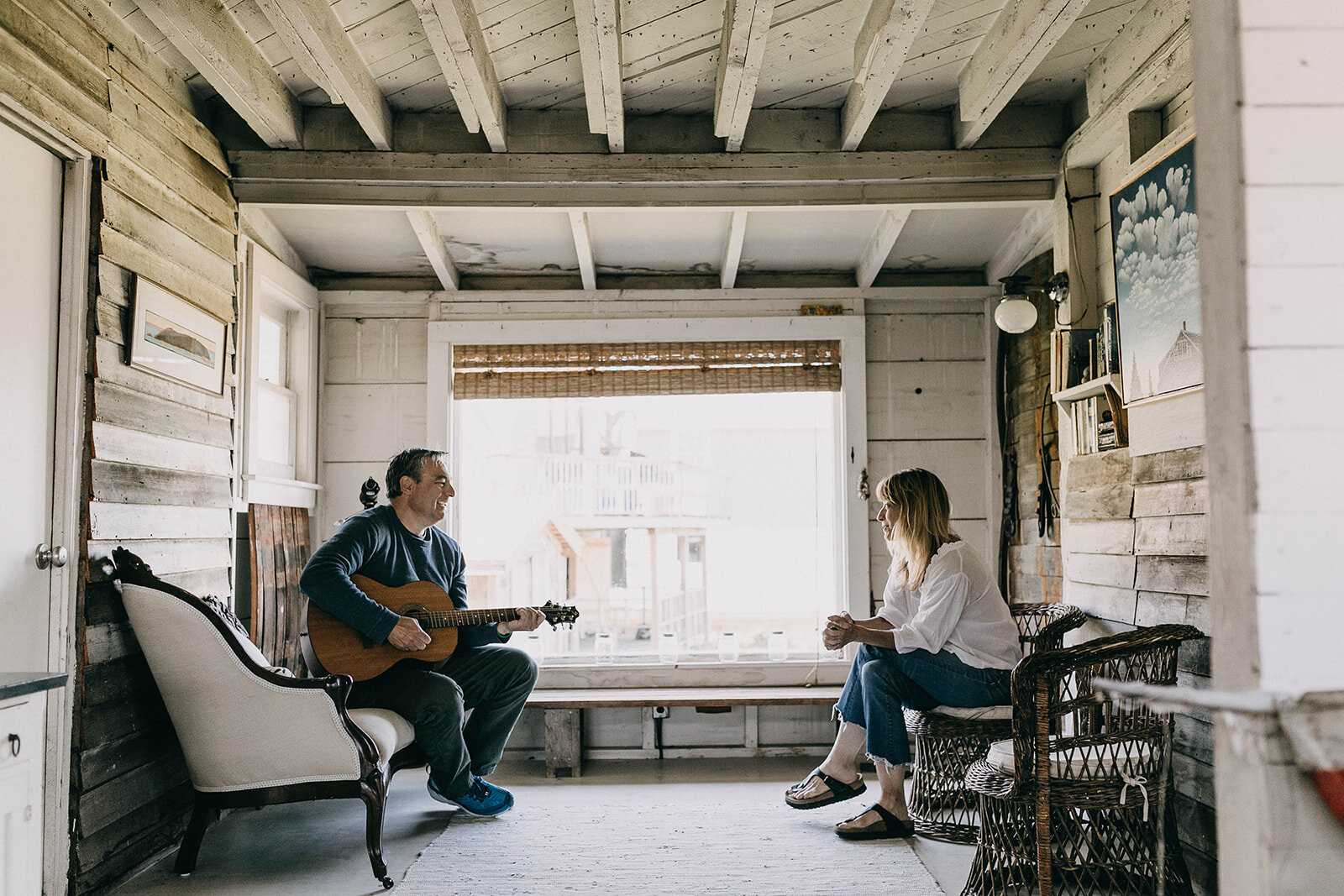 The house was sold furnished, as all island homes are, so Sarah inherited all previous decor from Herbie on down. A self-proclaimed minimalist, Sarah pared it back to its essence, keeping only what resonated. Weather beaten and windswept on the outside, the home’s interior has a sun-washed bare-bones simplicity in keeping with her philosophy.

“There’s nothing in this house that doesn’t speak to me,” she says. Meaningful pieces, like some of Herbie’s sculptures, remained. In the kitchen, metal pot racks by Herbie are hung with a well-loved assortment of pans. Under the stairs, a curtain comprising his hand-carved wooden buoys conceals a closet. An assortment of colorful glass and pottery on the picture window shelves was there when Sarah bought the house. The curator in her simply honed the collection. The house gets its name, “See Vue,” from a sign found in one of the bedrooms. 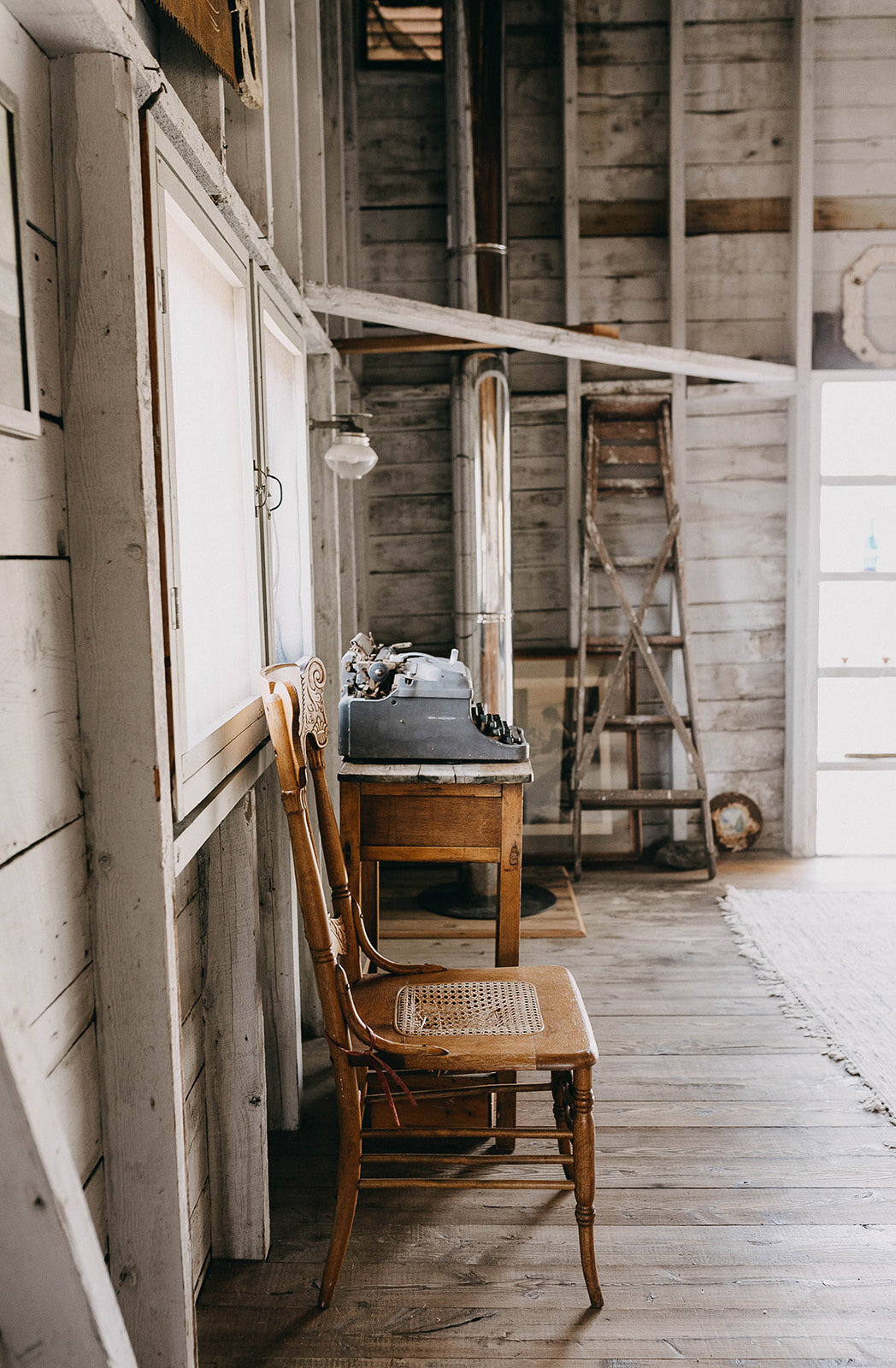 Sarah pared down the home’s inherited furnishings to let its unadorned simplicity shine through. “The bones of this house are extraordinary,” she says. 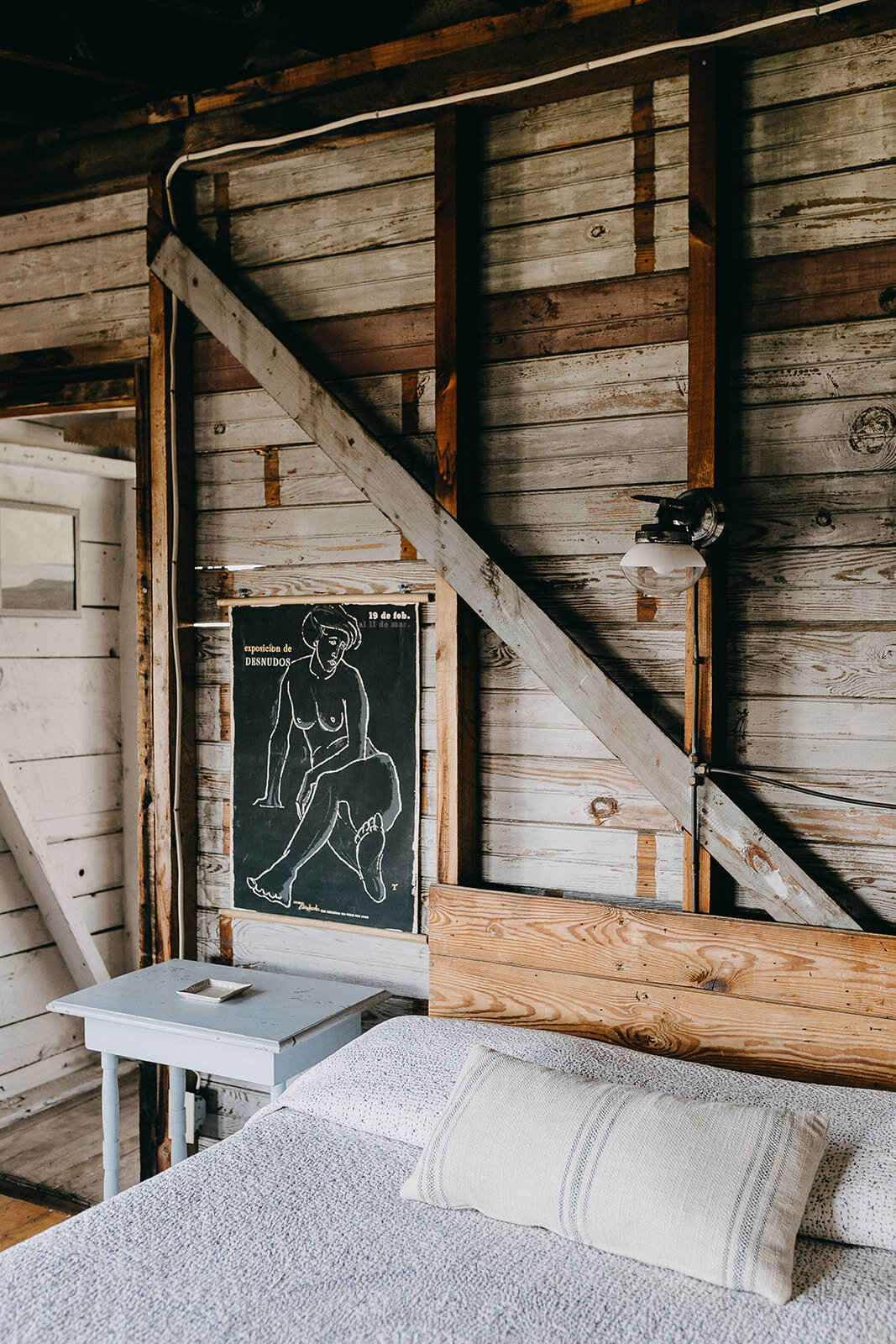 In the spare main bedroom, a handmade headboard is joined by a vintage art poster. The quilt is from Sundance Catalog, topped with a pillow from One Kings Lane. 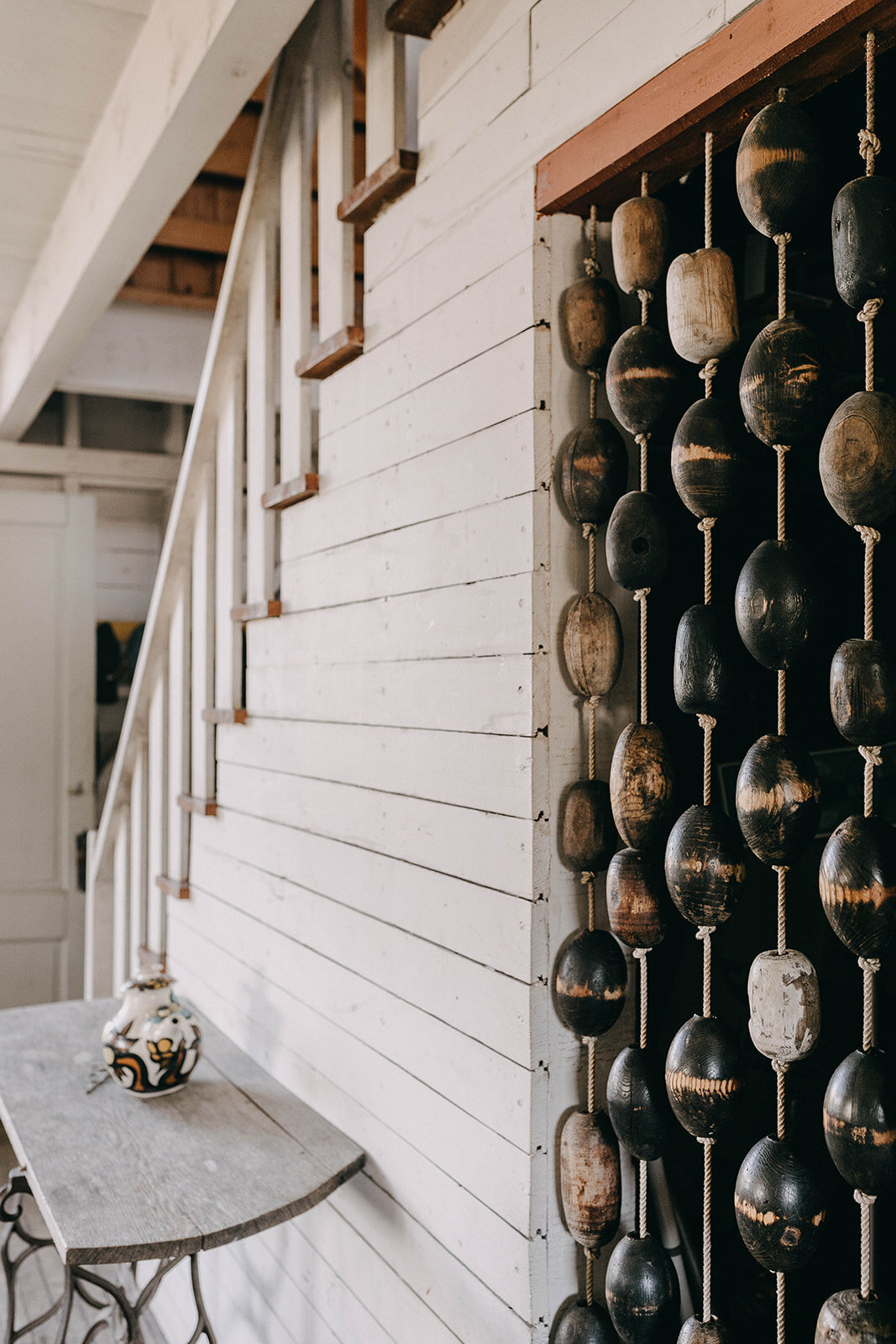 A curtain of buoys sculted by Herbie Kallem conceals a closet. 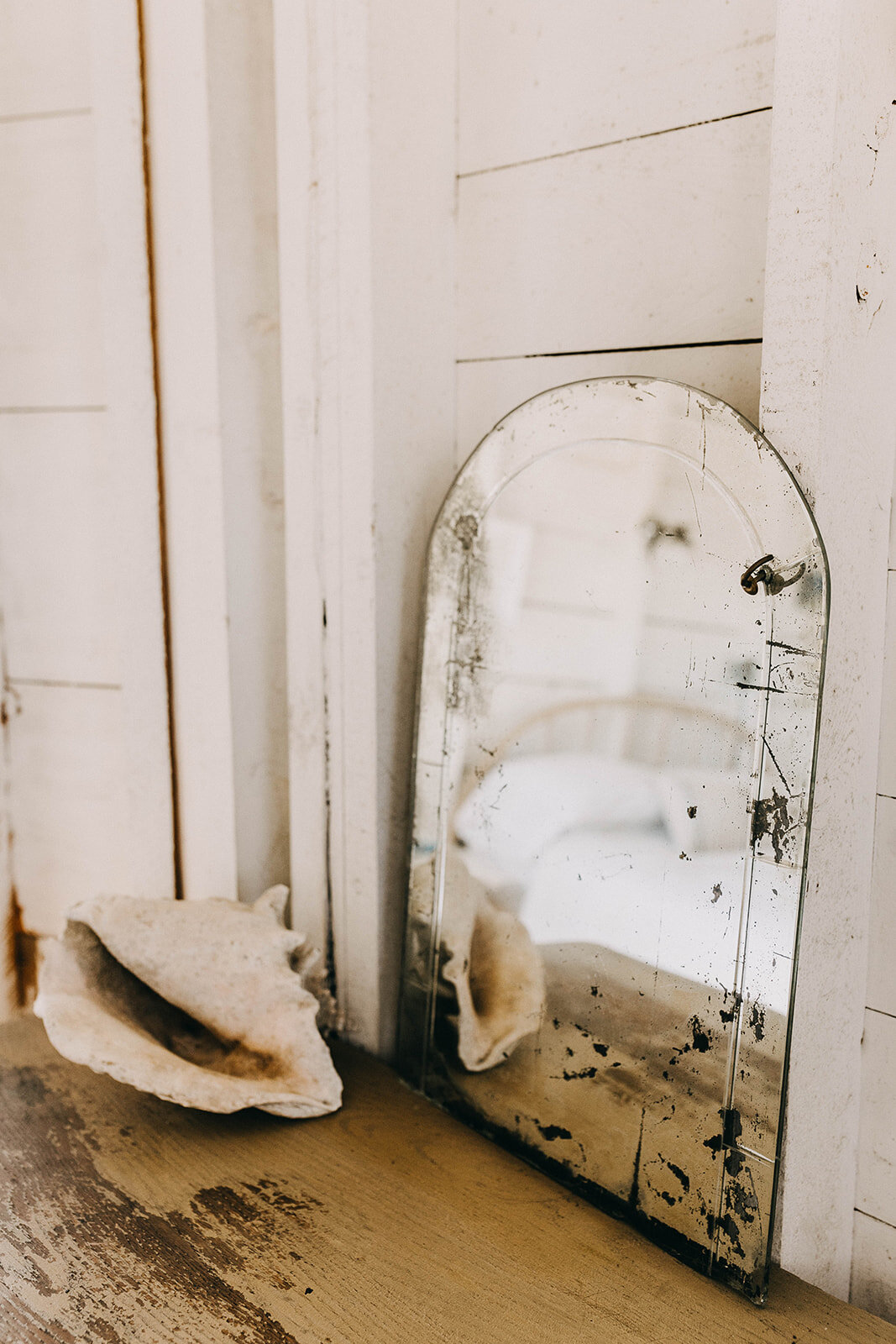 When you live on an island as storied as Monhegan, you inherit tales as well as furniture. As tranquil as it appears now, back in the day, the house was a lively gathering spot, part of the island’s so-called New York Jewish Quarter. Herbie and pal Zero Mostel (a fellow artist as well as actor) were known for their wild parties. They were island neighbors, just two doors apart, and also shared an artists’ studio in Manhattan’s Flower District. “I’ve been told that Herbie was quite a character and often wore lederhosen!” Sarah shares.

Josh Mostel, Zero’s son, recalls Herbie’s DIY spirit. “He was very handy. He was the first guy with a generator. Herbie would build the thing on the ground, prop it up, and 5 million nails in 20 seconds, he’d nail the whole thing together,” he recalls. “He was a great guy. Everybody loved Herbie. Handsome, too!”

In a twist of kismet, Josh married Kim Murdock, the home’s second owner, in 2015. Kim’s family has their own long history on the island, though Kim had never set foot in Herbie’s home before buying it. “I wasn’t a party girl,” she demurs. Her parents once ran the general store, and her three siblings are full-time residents (her brother and sister-in-law run Shining Sails Bed & Breakfast). “I’m the black sheep,” she laughs, referring to her mainlander status. She lives with Josh most of the year in New York City and summers at their Monhegan home, just steps from Sarah’s.

Sarah herself resides in Rochester but centers herself with her annual summer return. She relishes time on the island with her partner, John, and visits from her grown children. Reflecting further on what the island means to her, she says, “While I may not know the lesson, Monhegan never fails to teach me something I need to know about myself, one of the many reasons I return, year after year. I take the wisdom I find on island and carry it with me inshore.”