Will Sears and Tessa O’Brien: Collage as Lifestyle

A couple with a knack for assemblage renovate a home to suit their lifestyle
Words By Debra Spark
Photos By Michael D. Wilson 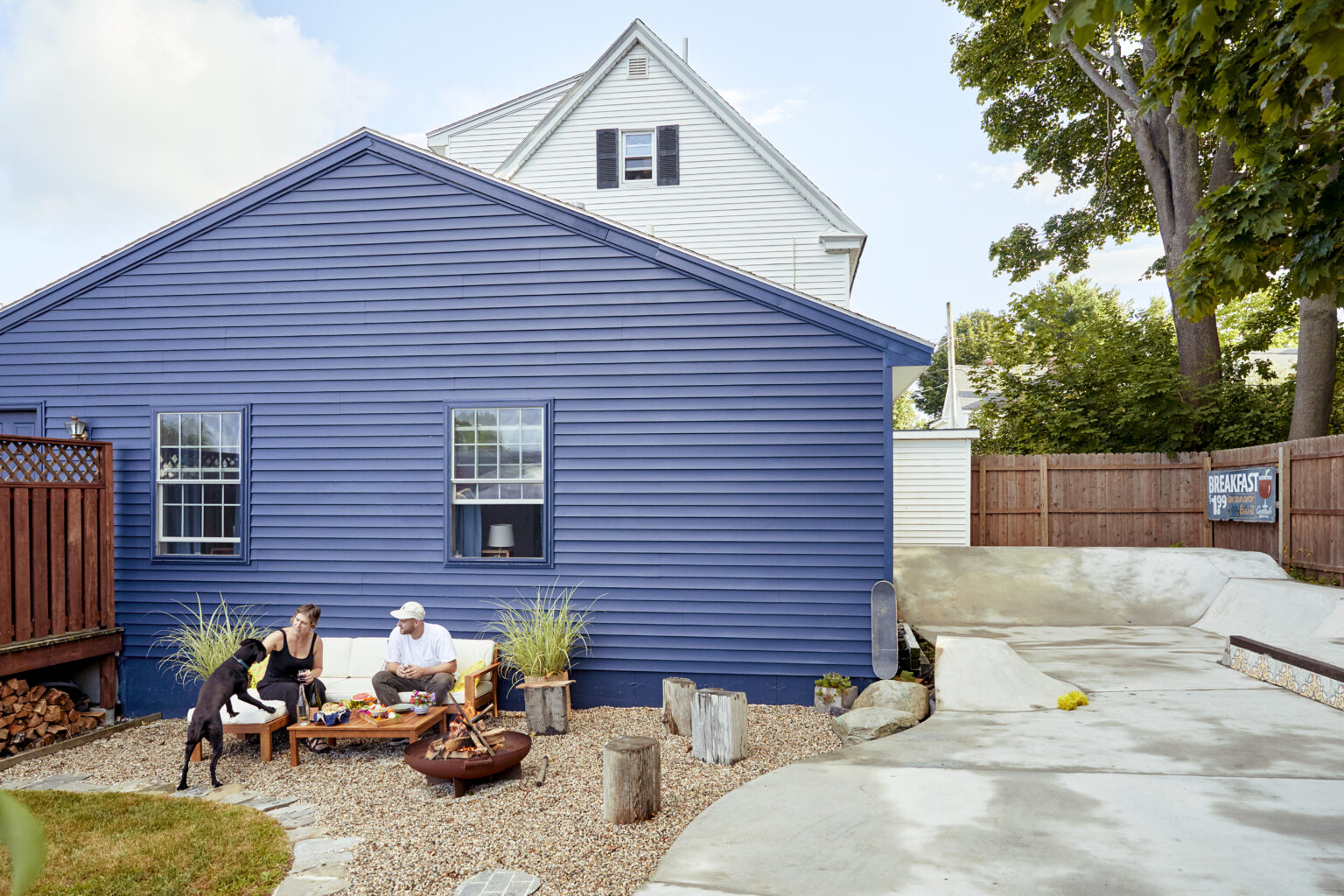 The fire pit patio is filled with pea stone and edged with rocks found on-site.

In 2010, visual artists Will Sears and Tessa O’Brien found themselves doing set design for a Maine music festival. For Tessa, the job came 8 years into the 12 she spent traveling the country doing just such work. Will, however, was new to the art production world and not a Mainer. He just happened to be in state for an art residency when a mutual friend (the sculptor John Bisbee) recommended him for the gig. By the time Will and Tessa had transitioned from friends who met while working to a couple with a house in Portland’s East End, Tessa had tired of the on-the-road lifestyle. She wanted to be engaged with her own community. Although Will took her place on the road for a while, he had the same desire. The two were never going to give up their respective studio practices, but they found a way to settle down by creating their own opportunities, adopting a “collage as lifestyle” approach to earning a living.

You’ve seen the results of their efforts if you’ve ever been to Portland. Their murals and signs can be found throughout the city, including along the East Bayside walking trail, on the side of 80 Exchange Street that faces Tommy’s Park, on the exterior of the West End restaurant Chaval, and in Congress Square Park. Through Better Letter Hand Painted Signs, which they now own with friends Rachel and Ryan Adams, they’ve made wooden signs, hand-lettered glass windows, painted brick facades, decorated vehicles, and provided sandwich boards for businesses like Elsmere BBQ and Wood Grill, Rose Foods, Eventide Oyster Co., Broadturn Farm, Maine Surfers Union, and Home Remedies. Will is also the art director for Oxbow Brewing Company, Tessa is the codirector of Able Baker Contemporary art gallery, and both do occasional stints teaching, jurying, or mentoring.

We are not minimalists. We like to look at cool things. 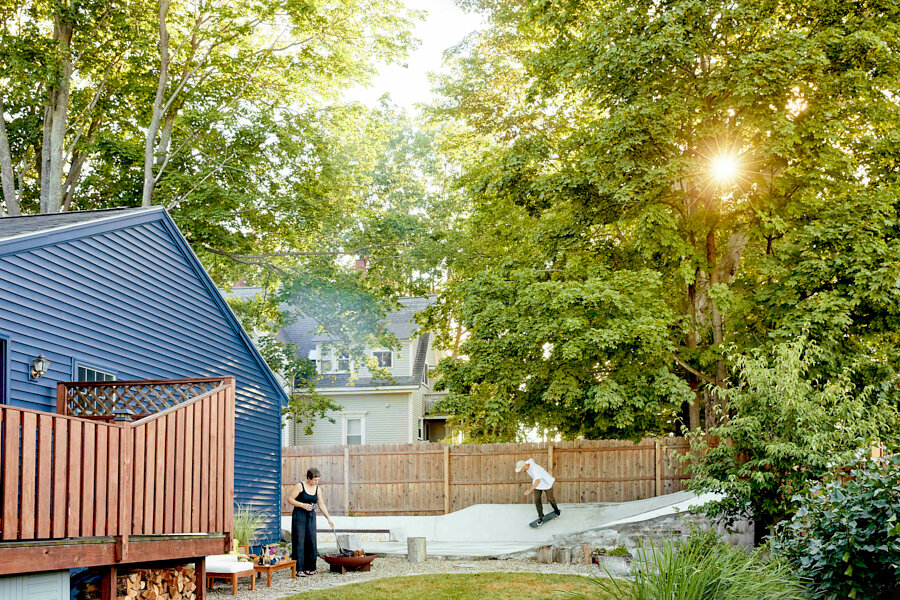 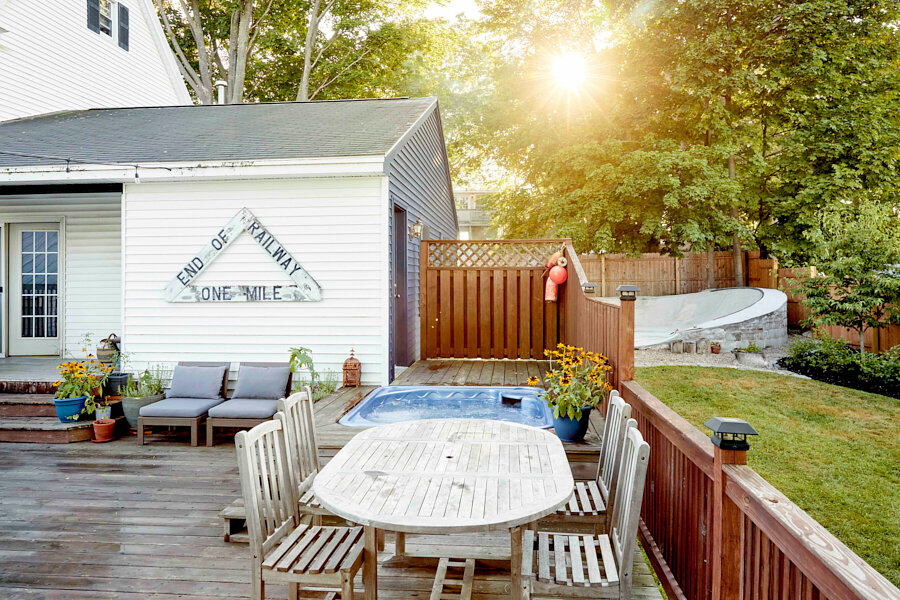 The deck includes a hot tub and room to lounge.

About six years ago, Will and Tessa began to long for home studios—they’d previously been renting in a community space—and a yard for their aging dog. After six months of searching for a new home, they took a drive on Maine Maple Sunday (the day maple producers set aside to attract visitors to their sugarhouses) to a listing on South Portland’s Maple Street (funnily enough). Here, they found a 1905 New Englander that felt like it had the potential to be what they wanted, only they had not yet put their own home on the market, so weren’t in a position to make an offer. That afternoon, they were describing their dilemma to a builder friend, and he said, “I will buy your house.” Tessa and Will had many friends who were tradespeople, and they’d often hung out in the kitchen, talking about what they might do to fix up the East End house. The builder friend already had plans.

As for Tessa and Will’s own plans: With the help of family and friends, they turned the South Portland home’s freestanding garage into a studio for Will and took down a wall between two second-floor bedrooms for Tessa’s studio. Friends from John Sparre Builders cut a hole between the floor joists and added a custom trapdoor to facilitate moving Tessa’s paintings from floor to floor. Meanwhile, the third floor became an in-law apartment, and Tessa and Will refreshed the whole house with new paint and light fixtures.

Tessa and Will decorated their first-floor living spaces (which include the master bedroom) with art by friends, ceramics from Tessa’s mother, family silver, antique road signs, and other curious objects, including caviar tins from a friend who works at Browne Trading Company and bones that a relative found in the desert. They turned to Craigslist for an antique hutch and oversized couch and used a cushion that was part of an installation for Tessa’s Maine College of Art MFA thesis for the living room’s fabric coffee table. “We are not minimalists,” Tessa says of their aesthetic. “We like to look at cool things.” 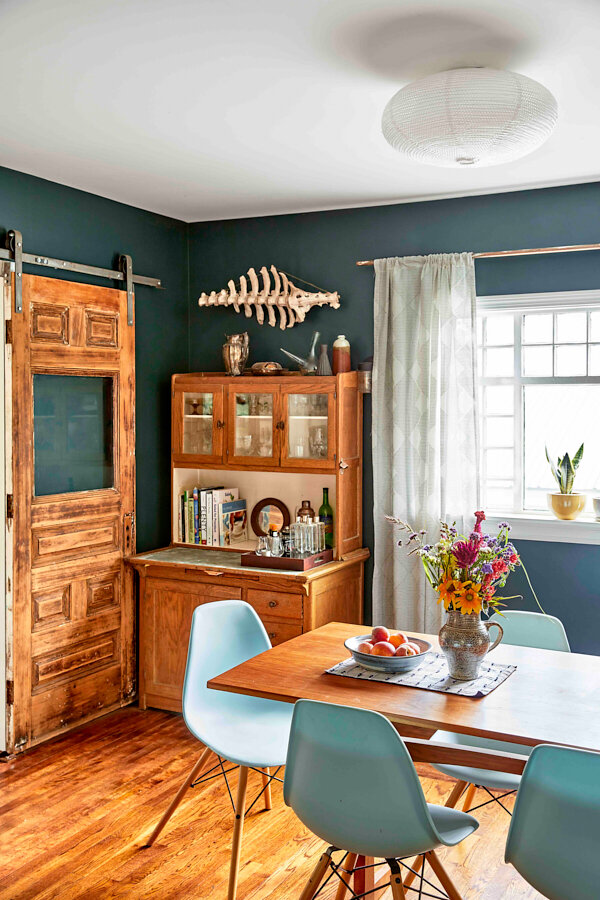 The table was built by Tessa’s father. Ceramic pitcher by Tessa’s mother. 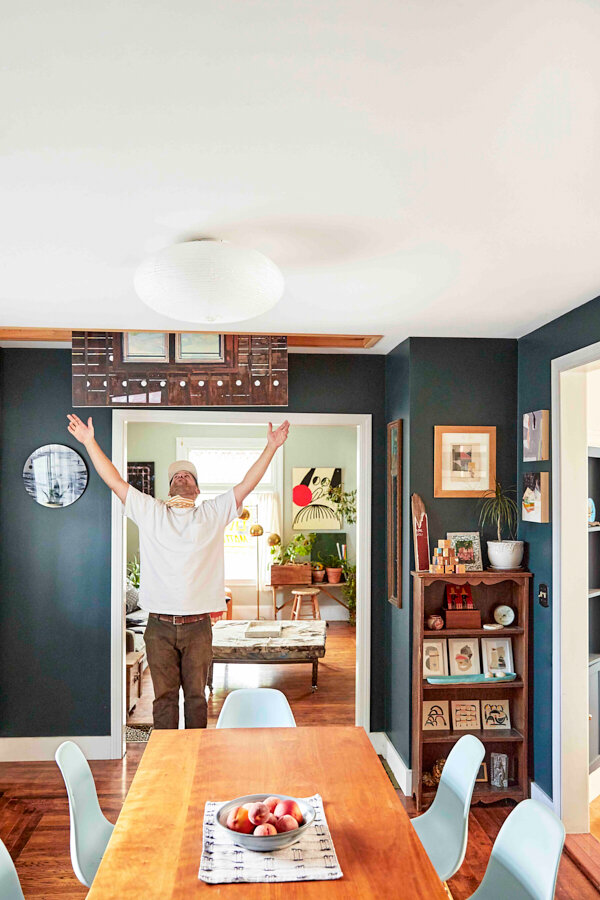 Will receiving a canvas from Tessa’s second floor studio.

As a housewarming present, Will’s father, a retired landscape designer, gifted Will and Tessa a plan for the yard. When they later married, friends gave them plants rather than housewares as gifts. Will’s father imagined extending his design throughout the yard, but Will wanted one corner for a skate park. “At first, I thought he was kidding,” says Craig Sears. But he wasn’t. Will had long been a skateboarding aficionado. The activity “scratched the itch of something athletic but didn’t have the jockiness of sports,” Will says of his early interest. But Will also appreciated the graphics on skateboard decks and that became an important influence.

Much later, as part of his initial self-education in sign painting, Will decided to paint 100 versions of a single word. Behind the Portland studio he used to rent, an old sign read “Absolutely No Trespassing.” The “Absolutely” had been painted in red enamel, the rest of the message in paint that had faded over time. Will decided to paint the word “Absolutely” because he liked the idea of “a negative message that turned into a random positive message,” he says. 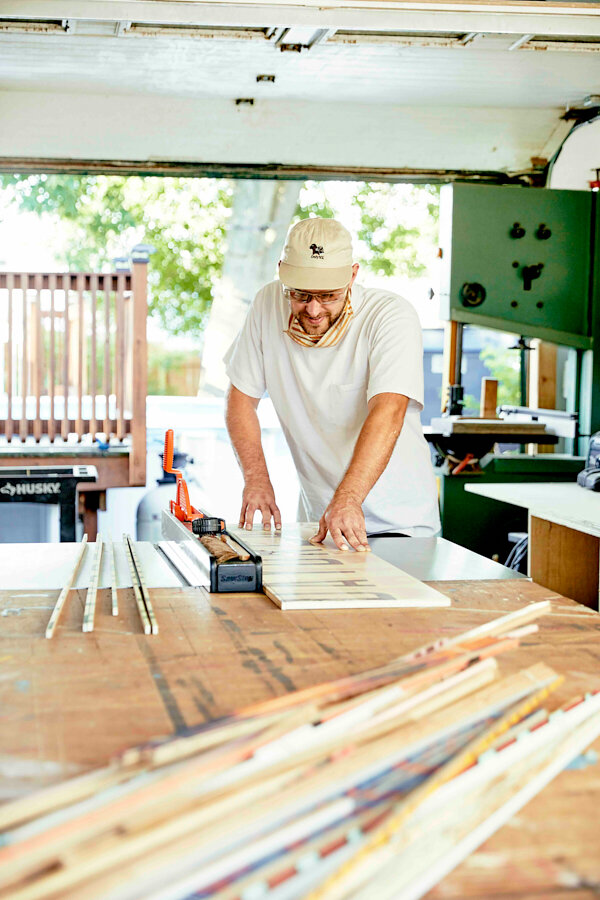 Will working in his self-made garage-turned-studio. 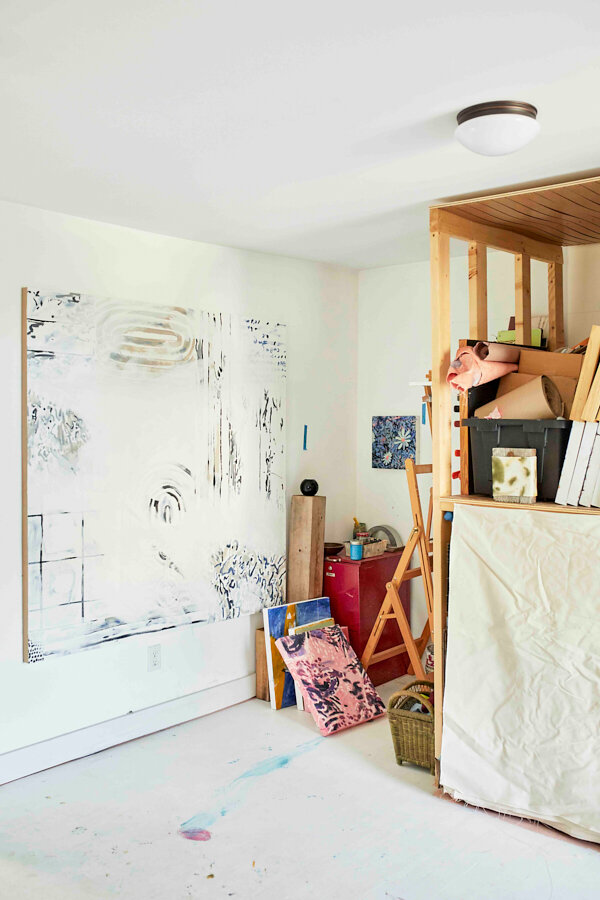 Corner of Tessa’s studio with storage racks and works in progress. 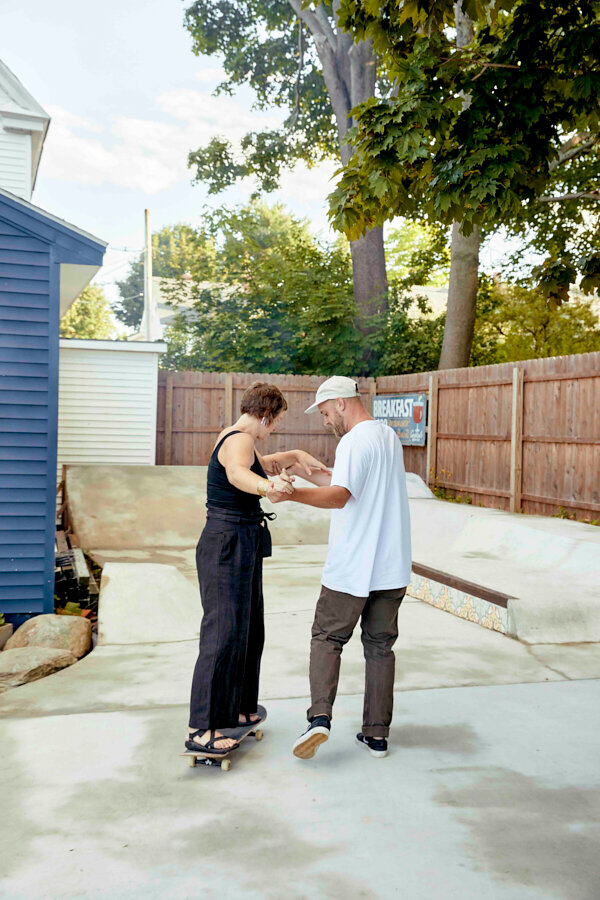 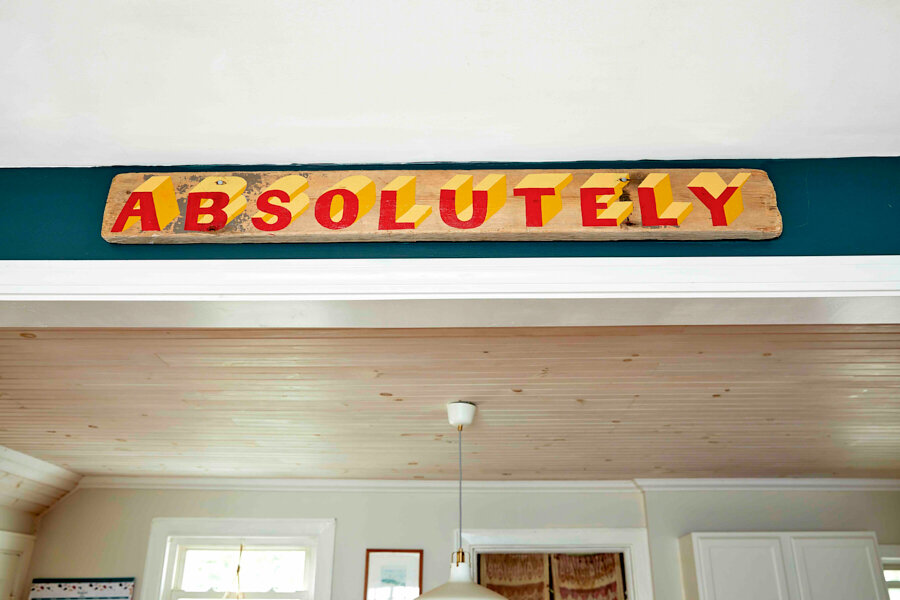 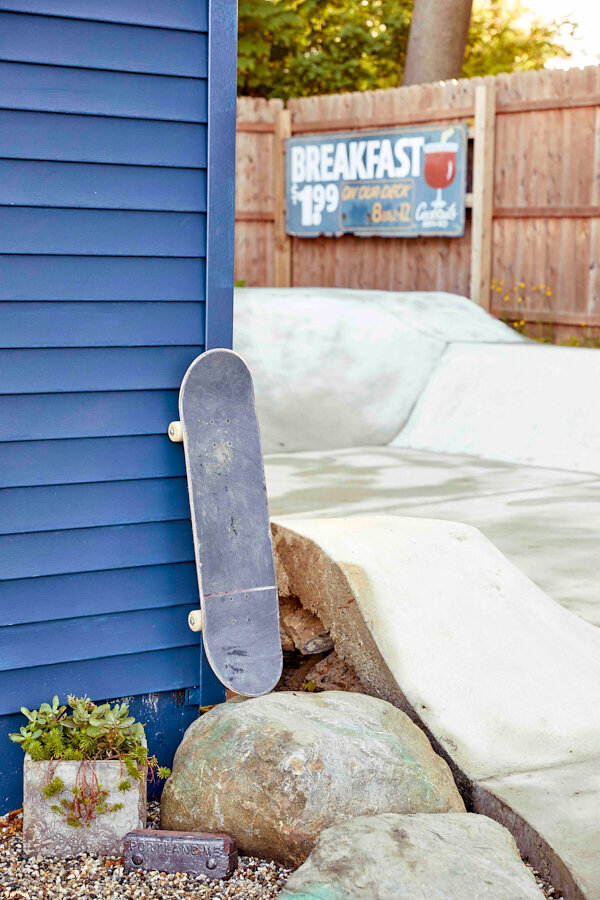 Tessa and Will call themselves “suckers for old signs,” including this “Breakfast” sign, found at Pete’s Place in Hollis. 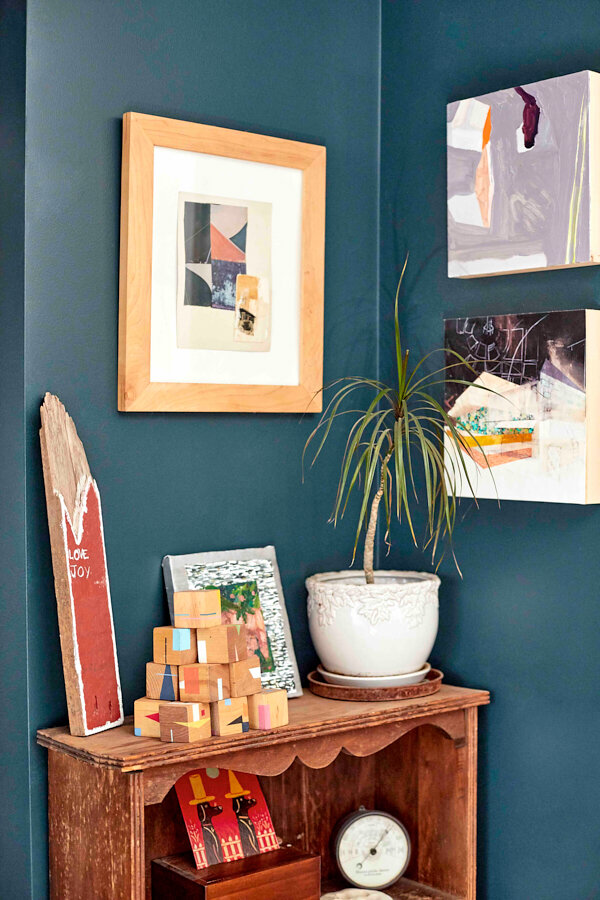 In the dining room: framed collage by Geoffrey Masland and oil painting by Claire Stankus above mixed-media piece by Alyssa Dennis. 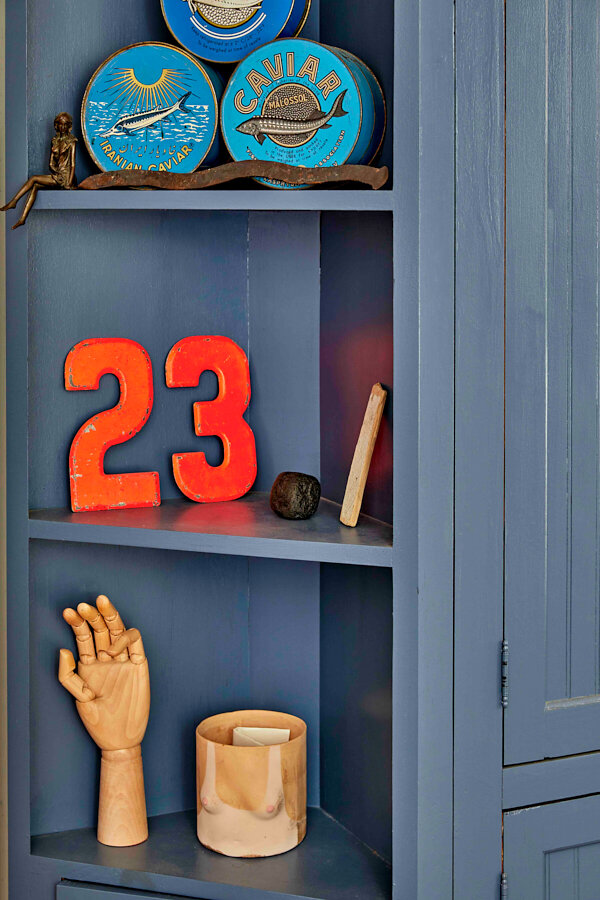 The house numbers from Will and Tessa’s previous home accompany other collected items from friends and travels. 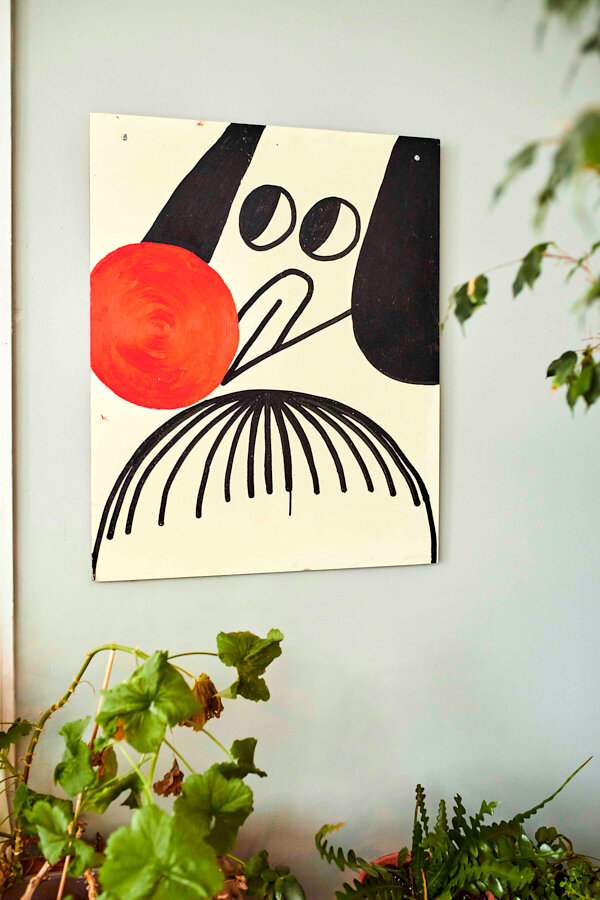 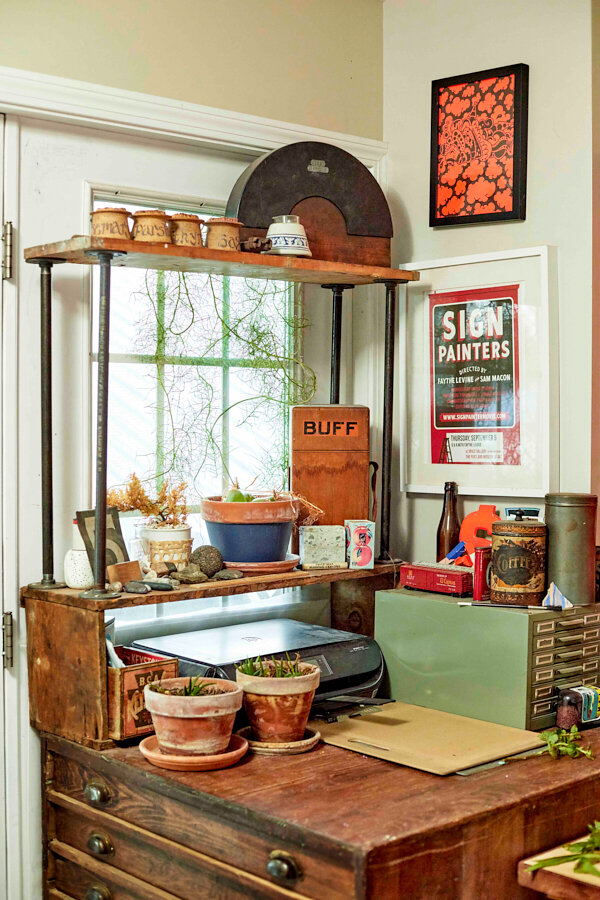 Now, one of his 100 “Absolutely” signs hangs above the dining room entryway into the kitchen at Maple Street. The sign’s “Sure, let’s do it” attitude doesn’t feel that random when applied to the house, though, or to Will and Tessa’s lives. It reads more as an affirmation of what good friends, loving family, and creative people can achieve when they assemble disparate things to make a whole.